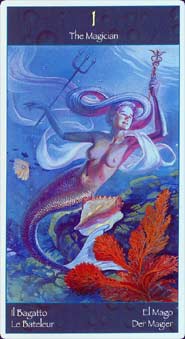 A themed tarot deck in homage to the mythical sea creature, the mermaid. The cards of the Tarot of Mermaids, naturally, have an undersea feeling, are attractively drawn, and can be used effectively for readings.


Card Images from the Tarot of Mermaids 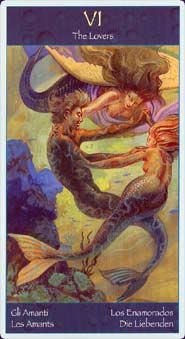 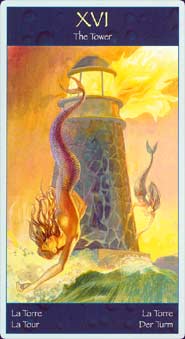 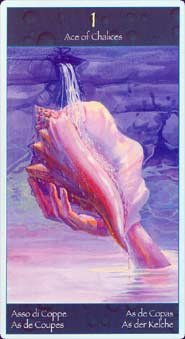 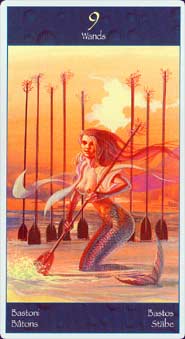 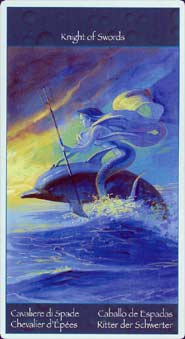 Tarot of Mermaids Review by Solandia

A fully illustrated 78-card deck by Pietro Alligo and Mauro de Luca, this is a pretty themed tarot that pays homage to the myth of the mermaid. As described in the companion booklet:

"This sea being similar to man fascinates but at the same time strikes fear because in her lies the secret that gave place to mankind. Her hybrid image highlights an unfinished evolutionary process. She unveils our ancient animalistic and savage nature. The sea or lakes in which the mermaids live, after all, are the symbol of the unconscious profound layers of our personality."

Artistically the Tarot of the Mermaids is painted in greens, blues, pinks and traditionally feminine colours, and has a very watery, undersea feeling. Inspired by the Rider-Waite-Smith style, these cards borrow just enough from its symbolism for the underwater-themed scenes to be recognisable. The Hierophant keeps his staff, the High Priestess holds a scroll, and the Magician has a trident and caduceus and swims in a garden of coral, shells and fish.

By design, these cards almost wholly feature women. Traditionally male figures have been modified so that the only mermen appear in selected majors (the Emperor, Hierophant, Lovers, Chariot, and Hermit) and in the King cards. As a consequence, there is a lot of female nudity and a slight topless beach vibe, mermaids not being known for their large amounts of clothing.

The suits are titled with the standard Chalices, Swords, Wands and Pentacles, but the images show a different association. The suit elements are represented by Shells, Tritons, Oars, and Pearls and are purplish-blue, blue-green, reddish-brown and orange-red in overall tone. This gives the Pentacles and Wands cards a warmer energy than the other suits. (Swords in particular has a very gloomy cast, as its scenes were happening deep underwater on a stormy and overcast day, and its mermaids are drawn with reptilian rather than piscine tails. Even so, one of my favourite cards in this deck is the Knight of Swords - shown skimming over the ocean on the back of a dolphin.

The border treatment on these cards is very nice, not only functional but also decorative. The titles are enclosed in green panels top and bottom, which have a subtle pattern of darker green bubbles. The backs area the mirrored images type favoured by Lo Scarabeo of late. This deck shows a small image of the Magician repeated in a dark teal colour.

This is an appealing tarot deck with a pretty, feminine energy. I recommend it to those who enjoy attractive artwork, and for readers past the novice stage.


Tarot of Mermaids Review by Cerulean

My first reaction to the Tarot of the Mermaids was 'how beautiful' for the colors and images. I had read that I could use what I know from the Rider Waite Smith meanings. I also hoped that the pictures would be inspirational to me. In other words, I was hoping for more depth than just looking at another pretty tarot.

If you are looking for challenging images, this is not a deck with war or combat stories. I found the images more gentle than in the LS Olympus or Dante, for example. I found it comparable in beautiful color to the Dante Tarot or the Tarots of the Crystals. The half-human figures in Mermaids are primarily female: I only count about 20 images with strong or identifiable masculine images.

There are some decks that are so pretty that I want to use them, but they follow an image structure that can be hard to follow. Tarots of the Crystals is problem for me—its swords as water imagery seems unique to the deck. If I wanted to be able to read it as the artist intended and have common meanings, I have a lot of guesswork ahead of me. Two other decks that I am still learning include the Olympus and Dante Tarot. I've almost grasped enough of the mythology surrounding the Olympus tarot to use it in readings. But it still throws some curves out to me.

I pulled one card from the Tarot of the Mermaids and one from the Olympus. Mermaids has a Seven of Pentacles scene where the seeker is looking at a half-buried treasure and seven pearls are floating upward. The meaning is a businesslike exchange or trade. I could almost form a tale where the mermaid has come to a reward of seven pearls after a search. Or the story point is she has to find the pearls to continue on her journey. Whatever the tale, it came easily and floated sweetly into my imagination. I also thought if my imagination is short of water scenes, here's a good way to become inspired.

If I compared the Mermaids Seven of Pearls to the Seven of Pentacles in the Rider Waite Smith or Thoth, I have another rich mix of ideas. But if I wanted to be challenged, I pulled the Seven of Pentacles in the Olympus Tarot. Because the Olympus has unique suits, the seven of pentacles is a shield with the Medusa's head. The Greeks are fleeing from Apollo holding the shield. The meaning of the seven of pentacles is terror. My Ovid translation says the Medusa's head will symbolize the extremes between beauty and terror. That's quite a story variation. Even as a comparative read, this would take some work. Because the Olympus uses mythic figures, I have a little help to find out more about the story.

Mermaids as reading tarot or as an inspirational one is very pretty for those who enjoy seashore or water scenes. To my pleasure, I pulled the Strength card from the deck and the smiling mermaid is gentling a massive sea lion. I am an avid student of kayaking when I can. I remember being surprised by a young sea lion, giving me a doe-like glance of curiousity and following other sea kayakers.

The minor suits follow the water imagery in this way: Wands become oars in a maize-gold setting, Cups are shells in lavendar blue, Swords are tritons in teal shades, and Disks are pearls in sunset coral tones. I like the design notes and descriptions of various mer-people in different cultures. This is a lovely tarot that reminds me of the inspiration of the sea and shore.


Complete Details of Tarot of Mermaids


Similar Decks to Tarot of Mermaids