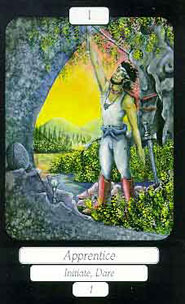 The MerryDay Tarot is a magical, fantastical, incredible tarot deck, mixing fantasy and reality. The artwork has its basis in the Rider-Waite, but is filled with detail, dragons and natural elements. The suits are multi-cultural and all associations with formal religion in the deck have been removed.


Card Images from the MerryDay Tarot 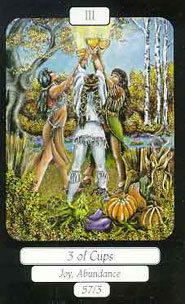 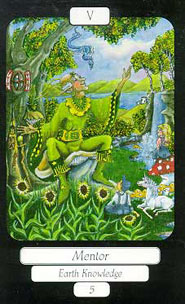 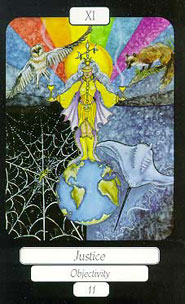 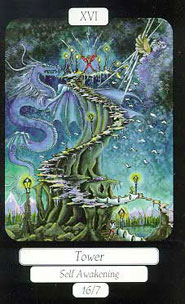 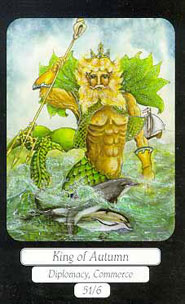 I acquired this lovely deck a few months ago from another Aeclectic member, and I must say that it has proved to be not only a wonderful addition to my collection, but a very good reading deck too.

The artist, Louisa Poole, whilst keeping largely to the Rider Waite and some Thoth meanings, has done a wonderful job of interpreting each card differently, often changing the images in the cards and sometimes the names of the cards, a change quite noticeable in the Major Arcana. For instance, the Hanged Man is titled the JourneyMan, and instead of showing the traditional hanging man, this deck shows a man with large white wings, meditating on what looks like a small bubble. His feet are limited by metal bars, and behind his is a spoked wheel.

All the cards have keywords on them too, and depending on your view of the keywords, this could be either beneficial or limiting. Often when reading with this deck I find them to be beneficial, and most of the time the images overpower the keywords.

The Minors in this deck are fully illustrated, and the artwork itself can only be described as colourful, detailed, and sumptuous. This deck is also a very multi-cultural deck, as Louisa uses people from all walks of life to illustrate the cards. All the cards are packed with symbolism: Even the Court cards, which is an achievement within itself! The Courts in this deck are definitely one of its strong points, as each on is very symbolic and easy to read. However, instead of the traditional King, Queen, Knight and Page, this deck uses Kings, which are more god-like figures, Queens which are human, Warriors, and Elementals: mythical creatures which usually represent each of the four elements. For instance, the Page of Swords in this deck is the elemental Pegasus, which represents the element of the swords, Air.

Overall, this deck can be considered a treasure. Not only is it refreshing, creative, and innovative, but it is interesting, attractive, and very readable. I find it brings out the child in me, and the colourful depiction of fantasy creatures in this deck makes me yearn for a walk in nature. This is a deck for beginners and more advanced readers alike, and is one for the collector as well as the reader who is looking for a useable deck.

This is another Tarot deck which represents 40 years of a womyn's life as a reader, teacher and spiritual guide. Louisa's book, Merryday Tarot Numerology Invisible Kingdom (2000) is a wonderful book full of helpful information, examples, guidance, and advice from a womyn who has clearly spent many, many years researching and working with the Tarot. How kind of her to record all of her expertise in one very reasonably priced, easy to read book! Having taught the Tarot for several years too I'm finding all sorts of helpful information in this book to assist my students in their learning and memorizing the cards. I highly recommend you invest in this wise womyn's book and deck.

The Tarot cards which Louisa painted herself are whimsical, ascetically appealing and easy to read. Louisa has added key words which point to the meaning of the card at the bottom making this a great deck for beginners (or those still struggling to remember the meanings of their cards!). I've done several readings using this deck and found the readings to be deeply relevant, mystical and uplifting.

A few of my favourite cards are: the IX Swords which depicts a close-up of a womyn holding her hand at her head looking down and to the side in deep reflection which Louisa has titled, Clairvoyance. What a perfect depiction of this card and such a refreshing alteration from the traditional!

Another one of my favourites is the Lovers card which depicts a naked couple. The womyn appears adventurous, independent and seeking standing fully in the middle of the river, while the man is depicted unsure of himself, confused with only half of one foot delicately placed at the edge of the river. Beside the man the wise woman stands looking down, unwilling to influence this couple in now having to make mature choices. Louisa states, Some of the choices of the Lovers or Number six are to become missionaries, healers, and artists with peaceful and considerate natures. The pitfalls can be unfaithfulness, self-pity, overindulgence, and the victim consciousness. To take a step into the unknown requires belief in self and courage to walk forward. A perfect depiction and interpretation of the Lovers card!

Louisa has obviously made a life-time study of numerology and how it relates to the Tarots meanings which she has presented in a clear, easy-to-comprehend fashion. Considering the complexity of this subject, Louisa has helped me to understand this relationship better than I ever have before. She has partnered the Tarot with numerology, and the seasons with the degree of depth others have with the Kabbalah and the Tarot.