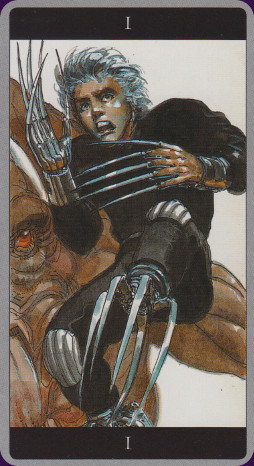 The Meta-Barons Tarot is based around the warrior characters and narrative of The Metabarons, a graphic novel series from Jodorowsky and Gimenez. The 78 cards are illustrated with original images from the books.


Card Images from the Meta-Barons Tarot 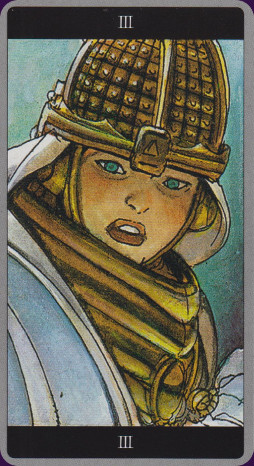 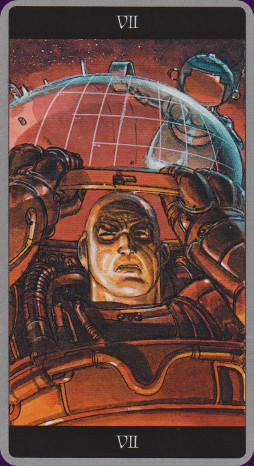 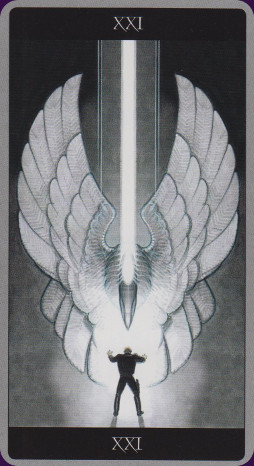 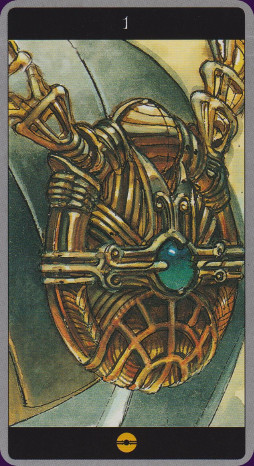 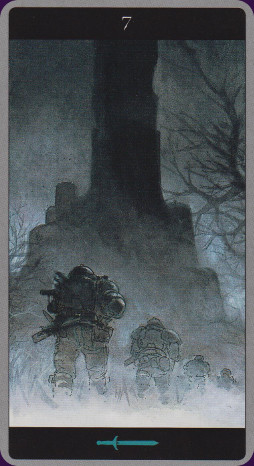 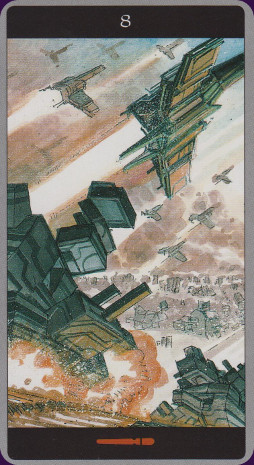 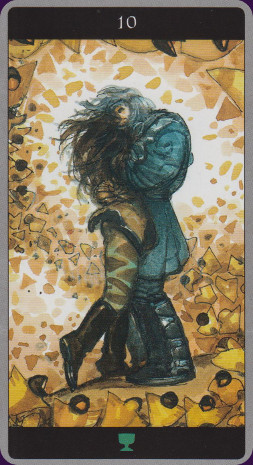 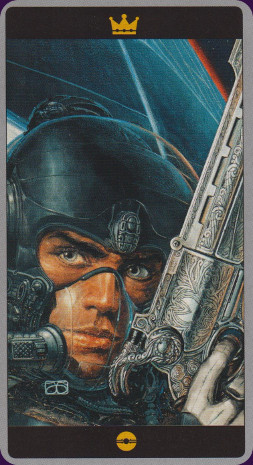 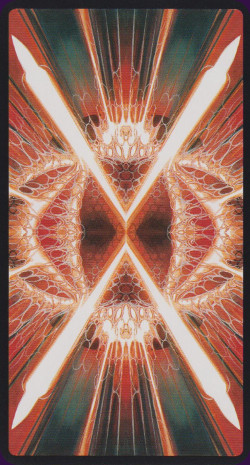 The Meta-Barons was a successful sci-fi comic that ran from 1981- 2003. It was a space opera about a dynasty of perfect warriors, with diverse influences from such science fiction luminaries as Frank Herbert and his Dune series, and with a good dose of George Lucas’ Star Wars saga thrown in for good measure. The illustrations for this deck are drawn entirely from the series of comics and have been chosen to fit in with a commonly accepted (Rider-Waite-Smith) tarot narrative.

The essence of the Meta-Baron saga is that each Meta-Baron is mutilated in his youth by his father (usually involving some sort of amputation) and his destroyed limb replaced by a mechanical/bionic one, including cybernetic implants. Each son must inevitably fight his father in a duel to the death – Darth Vader narrative anyone? The Meta-Barons follow a Bushido-like code of ‘victory or death’. The Meta-Barons Tarot comes complete with a whole raft of comic book tropes – buxom women, androgynous automatons, and square-jawed hyper masculinity. This deck is gritty, truculent, masculine, and gladiatorial.

This is a 78 card fully illustrated deck. the cards have no titles, only Roman numerals for the Major Arcana, and Arabic numbers for the Minor Arcana. The suits are indicated by appropriate symbols – Chalices, Swords, Pentacles, and Wands. Court cards are denoted by relevant symbols at the base of the card - crowns for both the King and Queen, a horse head for a Knight, and a helmet for a Page. According to the Little White Book the cards have not been renamed or have their order rearranged, and follow A. E. Waite’s standard of arrangement.

The cards measure 66 x 120 mm. The card stock is very good, thin, light and flexible without being flimsy. The finish is low gloss and very smooth which facilitates easy handling and enables the user to shuffle them without issue. The print quality is excellent – crisp and clear, without flaws – no blurry images, no compromised colours, or "bleeding". In fitting with the themes of this deck – science fiction and military matters - the colours are quite sombre. The artists palette is dominated by greys, blues, browns, fiery reds and sulphurous yellows.

The pictures appear to be primarily pen and ink, as fitting with comic book illustration style. The artwork is deft and confident, with some images being beautiful in their detail and others brash and choppy. Both the artists style and the images used give this deck as strongly masculine outlook. The cards are bordered in silver grey, with black banners at the top and base of each picture, which contains both the card number and/or this suit symbol. The design on the back of the cards – a sort of laser burst of rusty reds is fully reversible. The cards are packaged in a lightweight cardboard box printed with images from the Meta-Barons deck. It is enough to keep the deck undamaged but it will not withstand any heavy handling.

The 63 page Little White Book comes with information in five languages – English, Italian, Spanish, French, and German. There is a brief introduction to the Meta Barons concept. A four card layout – The Test of the Warrior is provided. This is a fairly standard divination spread – The Problem, The Querent, The Querent’s Strengths - that will enable a favourable outcome, The Outcome/Future.

The reasonable amount of information for the Major Arcana cards – a description of the action taking place, and *who*is doing what. A key phrase which summarises the essence of the card is given in bold print; and keywords are given as divinatory meanings and possibilities. The Minor Arcana cards have a single line of description and two words of summary divinatory meaning. These are relatively standard interpretations, with no serious departures from accepted meanings. No reversed interpretations are given for this deck. Although the information is relatively brief it does put the user in the picture as to what is happening in each card and facilitate fairly trouble-free interpretation.

The Meta Barons tarot deck is of course suitable for Meta Barons and sci-fi fans. Tarot readers wanting a more masculine deck, or a deck which leans towards the bellicose will enjoy this energetic and modern tarot. it is not suitable for beginners as it has no standard symbolism and is based entirely in the Meta Barons narrative.