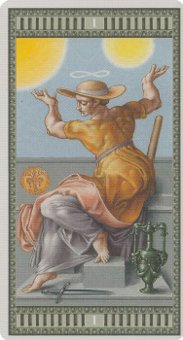 The Michelangelo Tarot is inspired by and illustrated in the style of the Italian artist, Michelangelo. The tarot scenes are rely heavily (and successfully) on body language to convey the meaning. From Lo Scarabeo and the artist who also created the Giotto Tarot, Bruegel Tarot and the Medieval Tarot.


Card Images from the Michelangelo Tarot 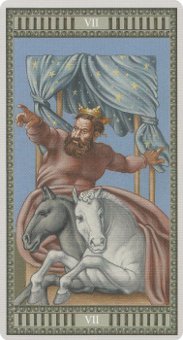 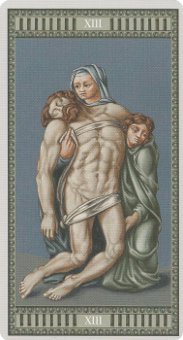 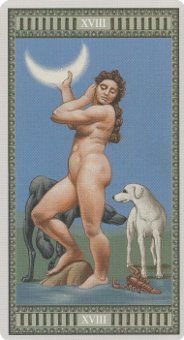 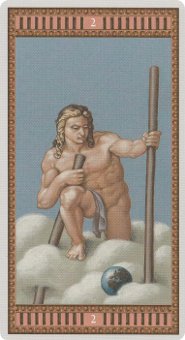 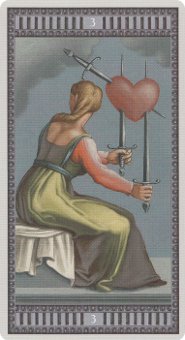 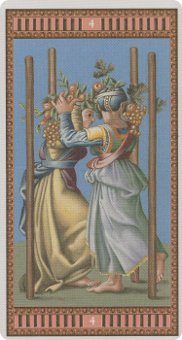 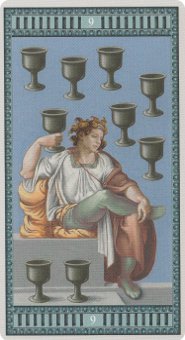 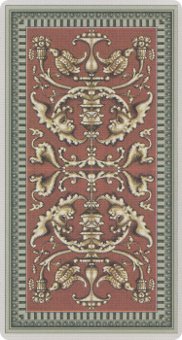 Although almost a Rider Waite Smith clone, the Michelangelo Tarot has some interesting features that command one's attention and diverges significantly in some of its imagery. Done in the style of Michelangelo's artwork the deck has a harmonious pastel coloration that is serene to look at. The card stock is durable and a good size for holding in one's hands, but not so small as to make it awkward to hold for people with large hands like myself. The card backs are reversible and has a somewhat architectural look about it.

Many of the figures are either scantily clad or naked and there is some male frontal nudity, so those who are distressed by the sight of male genitalia might find those images unacceptable--but all the nudity in the deck is tastefully done.

Except for the court cards, there is no text on the cards at all, just Roman numerals and different colored borders for the four suits and one for the majors. In this deck Justice is 8 and Strength is 11. I really love the way the artist represented the meanings of the cards. In the majors, of note is the Wheel of Fortune, Death, the Tower and the World. The Wheel of Fortune is represented by a hoop with a 3 figures around it and a fourth falling through it. Death is represented by an image of Jesus' body being supported by the Virgin Mary and another woman. The Tower is not seen in the Tower card just a rain of debris with 2 falling figures, and the World is a conglomeration of various figures that is not even slightly reminiscent of the traditional representation.

The minors are very varied, while some are somewhat straight forward representations of the RWS decks figures, others are far more abstract. The 8 of Wands does not immediately call to mind the typical representation, and the Ace of Wands is almost phallic. Some of the figures are facing the reader and other have their backs turned on us. The Suit of Coins replaces the Pentacles of the RWS deck and harkens back to much older decks that were about long before illustrated pips-- although many of the images are very much RWS interpretations.

The deck comes with a rather typical, but larger than usual LWB. This is definitely a deck, in my mind, which could use a larger companion book to go along with it as well as a nice Tarot bag. In the final analysis I'd say that this deck is something old and something new and for those who like a more classic Tarot look is sure to please. The style and artwork is very reminiscent of the Renaissance Tarot which featured similar artwork only with Greek and Roman mythological figures instead; my guess is that if you liked that deck you'd very much like this one as well.

Others have stated in things written about this deck that it has a "cold" feeling to it, but I could disagree more. The figures are very dynamic and seem to jump off the card. For collectors of Tarot art, it has enough variation and difference to make it a worthy addition to one's collection even if one has not the intention to read with it.

Many are the times I have stopped by my local esoteric shop – a mere ten minutes’ walk from my house – and feared that it may well be the last time I see the door open. Stock has been dwindling and their once full tarot cabinet has been spartan and rather sad of late, so I was delighted when I went in today and it felt that things were on the up again. The tarot cabinet was now fuller, as were the bookshelves, and there was a good selection of crystals, reading cloths, runes, pendulums and all sorts of goodies and signs of life. The owner said that issues had been ironed out with distributors and suppliers and it looked like things had finally improved. I wish them the best of luck and want to do all I can (as I always did) to keep them in business. And I was thrilled today when I saw that among the twenty or so decks now in stock (a vast improvement on the last few visits), they had the new Lo Scarabeo Michelangelo Tarot in stock. So I could do my bit for keeping the local store in business and get a brand new deck release. It wasn’t much more expensive than if I had bought it online, and I haven’t even seen it available online yet from my usual sources so of course I snapped it up and went home feeling very pleased with myself, stopping off for coffee and cake on the way, to break open the shrink-wrap and decide what to make of it.

I had heard that it was cold. This was an opinion that had reached me. The artwork is by Guido Zibordi Marchesi who also did the Giotto Tarot, the Medieval Tarot (not that “modern” car crash mash-up) and one of my favourites, the Bruegel Tarot, a ribald and grotesque peasant-fest replete with weird symbolism and morbid details. I had seen very few scans of the Michelangelo Tarot which meant that this afternoon I had that lovely sensation of surprise which is so hard to come by in contemporary deck buying. Of course we all know Michelangelo ( it strikes me now; I’m rather glad that we don’t have a reappropriated David in this deck, holding a pentacle instead of a sling) and the images in this deck tend to be drawn from his fresco work rather than the sculptures, which was a wise decision on the part of the artist as they retain a little of the original painterliness and aren’t just sculptures made 2-dimensional. The LWB refers to the neo-Platonism in Michelangelo’s work (which includes his poetry), and tries to link the deck with ancient, hermetic – and by extension, magic – texts which were popular during the Renaissance. However, after even the most cursory glance at this deck, it is obvious that the central motif here is really The Body.

“The motion of Michelangelo’s figures lies not in the movement itself, but in the strength and interior tension that trigger it; it is the contrasting energies and drives within a space that escapes the laws of natural vision. The muscular and taut figures display and flaunt an inner impetus that generates the action.” (LWB p. 4-5) I’m not entirely sure what this means, but what I do know is that the focus of this deck is very much the twisting, contorting, grandiloquent naked male body. Even the females have male bodies. Like so many Renaissance female nudes, they feel like bodies drawn from male models with what a friend of mine used to call “ice-cream scoop” breasts added at the last minute. The Seven of Swords is a classic example of this. This, however, is a quality we can see in much manneristic Renaissance art and isn’t something peculiar to this deck. Interestingly, Michelangelo is one of the artists who the historian and artist Vasari in his Lives of the Artists considered to be right at the pinnacle of human artistic achievement. He spawned many imitators (Vasari being one of them) who seized on that anatomical perfection and tried to make it more heroic, more virtuoso, more dramatic, more otherworldly and actually ended up deforming and debasing it. This deck sometimes feels like a deck with nudes by Michelangelo’s rivals, rather than the master himself, as the posturing and gesturing is really rather over the top. Sometimes that gracefulness is lost.

However, I have to say, lest it cannot be read between the lines, I really rather like this deck. I like it a lot, in fact. Of all Lo Scarabeo’s more artistic tarot endeavours, this – in my opinion – is probably the nearest to the Rider Waite Smith model, which may help widen its appeal. Usually with Lo Scarabeo decks there are a few cards which feel a bit “out there” and you may wonder what the artist is trying to convey (or perhaps enjoy being stretched; depends on your perspective) but every single card in this deck contains Rider Waite Smith references, often very subtle and at first glance I think, as a deck, it looks very readable. There isn’t a single card which is unrecognisable from its Rider Waite Smith counterpart. The symbolism isn’t always there but in the gestures and movement, you can see exactly where the image is coming from. The Seven of Pentacles, for example has a figure twisting to look at a tree stump, suggesting hopeful harvest. The voluminous, muscular bodies take up much of the card space and there are some very beautiful cards here. It has to be said that this deck is very homoerotic. So many posturing naked male bodies, so much brazen nudity and writhing. The Fool is totally naked, high on his cliff top, and it would be odd if he wasn’t, since if anything is going to convey carefree abandon, being naked on the top of a cliff for all to see has to be the best way to do it. The Wheel of Fortune feels rather orgiastic, naked men toppling over one another. However, I have to keep remembering that it is the classical not sexual nude, even though I cannot help thinking who needs a gay tarot when we have this one? Apart from the extensive nudity which may bother some (not me), the imagery is generally very elegant and dynamic. I find it much more welcoming and dramatic than the Giotto Tarot which is rather static in comparison.