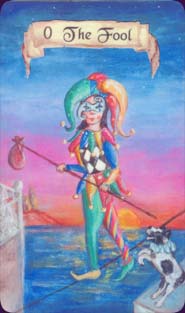 Tarot of the Midnight Masquerade

The Tarot of the Midnight Masquerade is a limited edition and luxurious set of 28 cards (plus two title cards), presented in a handpainted, themed wooden box. The deck has 22 majors and four aces based on the Rider-Waite tradition, an alternate Wheel card and a Happy Squirrel card, drawn in vibrant pastels and featuring masked characters at a ball.


Card Images from the Tarot of the Midnight Masquerade 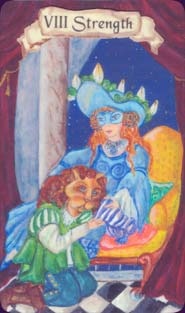 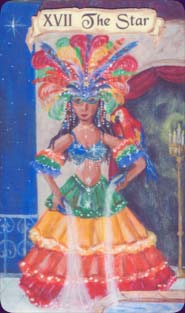 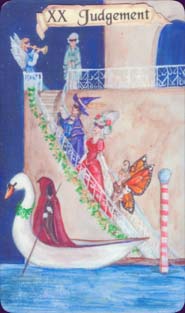 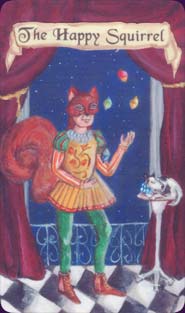 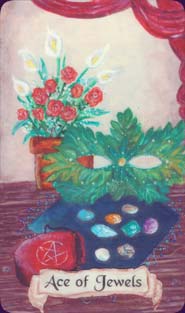 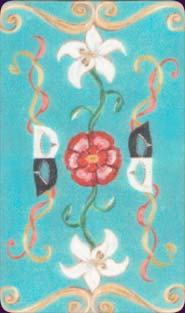 
Tarot of the Midnight Masquerade Review by Alta

Midnight Masquerade is a self-published deck consisting of the 22 Major Arcana, including two versions of the Wheel of Fortune. Rounding out these are the four Aces of the Minor suits and also a humorous card called The Happy Squirrel. (This card, first mentioned in an episode of The Simpsons, was included as a downloadable extra for the Victoria Regina Tarot and is also an extra card in the International Icon.)

The cards are quite sturdy yet flexible and are smoothly hand laminated. There are also two cover cards.

The cards are scanned images of paintings by Ms Tisch-Hollister, many of which are highlighted with metallic paints giving them a shimmering quality. The colours are bright and textured and they well suit the theme.

While generally following the Rider-Waite tradition, the cards have a very distinct atmosphere of hidden things, surprises and clever humour. The theme is that of a ball given by Dame Fortuna herself. The images show guests arriving and events at the ball. The colourful cards reflect the theme of costumes, night time splendour, and the unexpected and the hidden. Using this theme, the deck follows some of the traditional cards down some unusual but in the end very satisfying byways.

The one that struck me the first time through was The Tower. It shows a liveried footman carrying a multi-layer wedding cake. A little dog has just caused the footman to stumble and the cake is toppling causing the figures the man and woman on top to fall towards the floor. The humour struck me first and then it occurred to me: this is an irrecoverable event, i.e. the cake cannot be put back together and if he was taking it in to guests, there is no time to create another. It is shocking and it is sudden. Clearly, a true Tower event. I like that, it made me smile but the meaning is clear.

Appropriate to a fancy ball everything shimmers and there are layers of images and mysterious figures waiting to help the reader pull out meaning. The Star, rather than being nude or wearing a simple wrap, is gloriously gowned and feathered and pours one stream into a courtyard pool and the other onto the flagstones. The ‘stars’ could be the diamonds sparkling on her gown, though the night sky is seen to her right.

XX Judgement shows guests arriving at Dame Fortuna’s ball, accompanied by a fairy-like creature. This is leaving of real life and the entry into the spirit realms. A hooded figure looking like the Grim Reaper has been the oarsman who brought them, while a trumpet-playing angel welcomes their arrival. As with all these cards, it merits attention for the beautifully rendered but effective detail.

The High Priestess is a belly dancer (!) but yet wears the triple crescent crown and stands between the black and white pillars holding the scroll of knowledge. There is an innate sexuality to The High Priestess which is sometimes not acknowledged and shows well here.

Each of the Major cards shows a thorough knowledge of tarot combined with a playful artistry and feel for colour and sense of place.

The Aces show the future evolution of the Minor suits. She uses Light (wands, and a prism, magician’s wand, lit candle and a fiery mask as symbols), Glass (cups, with the symbol being a crystal stemmed party goblet, a mirror and gazing ball and a ship with a mask decorated with waves and symbols of the sea), Jewels (coins, to represent the earth element, as well as plants and a mask made of leaves) and Blades (swords with a symbol of air as the feather with a mask shaped like a butterfly for the mental air element). The touches of metallic point are used to fine effect to set off these cards.

The deck is fully usable with just the cards available so far, though she plans to create a full deck in time, hopefully published by one of the big publishing companies for tarot decks.

I found it enchanting with a wonderful air of hidden mysterious happenings to make just right for tarot cards.


Tarot of the Midnight Masquerade Review by Solandia

Fortuna, the Goddess of Fortune and Luck held a grand masqued ball in her villa among the stars, inviting many mysterious guests from the far corners of many different worlds. But like many occasions held by the fickle Lady of Fortune, Time moved fluidly through the endless night, until a moment.. no more than an illusion, but a very powerful one… was determined to usher in an entirely new era.

That moment chosen to break the barriers of the eternal Now was the stroke of Midnight.

Robyn Tisch Hollister is a professional Tarot reader with twenty years experience, a costumer, a mask-maker, and a puppeteer. She combined her skills and her love of Mardi Gras and Carnival to create the Tarot of the Midnight Masquerade, a themed fantasy deck that takes place in a grand ball in the few hours before midnight. Intended to be a full 78-card deck eventually, this limited, hand-published edition has the major arcana, Aces, and a couple of bonus cards.

Along with the 22 Rider-Waite inspired major arcana, there are two extra majors - an alternate Wheel of Fortune card, and the Happy Squirrel card (inspired by an episode of The Simpsons), plus the four Aces. Included as well is a ‘Tarot of the Midnight Masquerade’ card that is illustrated with a masked Tarot reader, signed and numbered by Robyn, and another card explaining the theme of the deck.

All of the cards have been painted in bright, strong acrylics on press board and highlighted with metallics. The end product has a soft-focus look - not quite blurry but not crisp - which adds to the fantasy feel. Wonderfully, they are also borderless and so there’s no distracting frame around the imagery.

My own favourite cards are the Tower, with its bewigged courtier carrying a huge tiered wedding cake that is just starting to topple (the figurines from the top of the cake are falling through the air), and the Star. She is less innocent-looking than is traditional; instead a straight-backed Latin dancer with a huge brightly coloured feather head-dress, ruffled skirt and spangled bikini, and a parrot on her shoulder pours water from vessels in both hands. The Devil is also clever: a bat-winged, horned, red-masked, goateed but debonair man holds marionette strings in both hands and is controlling a costumed man and woman on the tiny stage below him.

The Tarot of the Midnight Masquerade comes in an appropriately luxurious set: a hand-painted wooden box with sliding lid. All 100 boxes in this edition have a unique painting of another guest: mine is of Lunare, the Lady of the Silvery Orb, who is painted (masked, of course) on the front with a jewel above her to represent the moon. On the reverse of the lid, her and her qualities of the Sister of the Cycles and the Royal Ambassador of the Moon are revealed.

Inside the box, the cards are wrapped in gold paper like a gift, tied with ribbon and sealed gently with wax. There is a rolled scroll, tied with a small elastic band that has a gold mask charm. The scroll is written as though it is an invitation, introducing you, by title, to the main characters to be at the ball – who are, of course, the Major Arcana.

An Invitation to a Grand Ball

The Air is heavily scented with Mystery,
And fairly crackles with festive anticipation
Guests begin to arrive to the Villa de Fortuna...
One by one they enter through the richly draped thresholds,
Past the masked sentries, the musicians gallery,
With secret smiles on their lips,
And each one is presented to the gathered assemblage
By the royal herald...

Everyone is introduced by title:

0 The Fool – Royal Jester to the Court of Risks, Merry Mountebank of the Journey Onward, Harbinger of the New Beginning, and the Courier of Faith Unknown.

17 The Star – The Bright Lady, Emissary of the Realm of Miracles, the Diplomat of Optimism, and faithful Agent of Hope, and the Inspired Reverance.

The Happy Squirrel – The Appointee of Saving and Planning, Delegate of Deceiving Appearances, Courier of Personal Reality Checks, and the Representative of Fluff and Teeth.

The Tarot of the Midnight Masquerade is a numbered collector’s edition and a work of art in its own right. I love the creativity of this deck, the attention to the detail in the cards themselves (every costume is different) and in the whole package - you feel like you’ve stepped into a dream-like ball of beautifully dressed elegance, magic, and seduction.

You can see Robyn’s minor arcana for the Tarot of the Midnight Masquerade as they are completed, on the Tarot Deck Creation board of the Aeclectic Tarot Forum.


Similar Decks to Tarot of the Midnight Masquerade