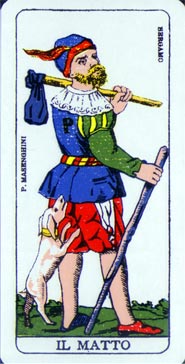 Tarocchino Milanese is a 19th century reproduction of a deck used for the Tarot game of 'Tarocchino', as played in Milan. The art is a simplified version of the Della Rocca and Dotti Soprafino decks.


Card Images from the Tarocchino Milanese 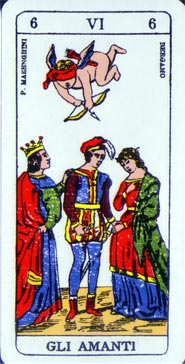 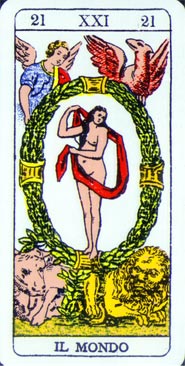 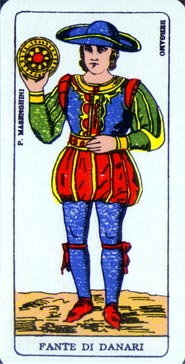 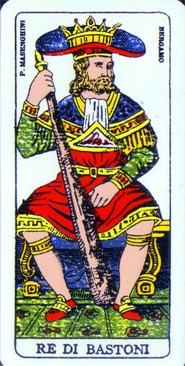 I like to think of this deck as "Soprafino for Dummies." According to the descriptive card in the deck, "this pack of cards is a faithful reproduction of that which was used for the ancient game of "Tarocchino" as played in Milan and was produced by the firm of P. Masenghini in Bergamo towards the end of the 19th century. The deck has apparently remained in print for use by game players as well as diviners since then.

The above description exhausts the English text that comes in the packaging. The designs of the deck are based strongly on the Della Rocca and Dotti Soprafino tarots. In this deck, they have been simplified, apparently to suit them to the needs of a less sophisticated printing technology. The figures are drawn in simple line art. Much of the background of the engraved Soprafino decks has been removed. The cards themselves are "Soprafino" in size, if not in production: they are small and narrow, again to suit the needs of game players.

The imagery contained in the deck is largely consistent with the Soprafino decks. This is a good thing for semi-traditionalists like myself, since the iconography, if not the production, is for the most part consistent with the Tarot de Marseille. The cards bear Italian titles. XIII is "La Morte". Familiar images reappear, such as the towers, dogs, and crawdad on XVIII The Moon. The variations typical of the Soprafino style in iconography have also been preserved: XV the Devil is posed dynamically atop a collection of bestiamorphic demons. In the court cards, the regard and demeanor of the Marseilles courts have been preserved with improved draftsmanship, as is typical of a Soprafino deck. But much of the floral decoration on the Marseilles pips has been removed, even from places where it has been likeliest to persist, like the 2 of Cups and the 2 of Coins.

The color production in my copy is not good at all. There are many white spots in the solid colors that fill in the inked line art. In some places, this looks like an intentional attempt to add textures; elsewhere, it just seems a flaw.

The background is dazzling white. The cards do not look old at all. It is fairly obvious that this is an old design that has remained in production for quite some time. The Ace of Coins has a hole for a tax stamp, from back in the day when playing cards were subject to stiff luxury taxes. None appears in my copy.

I like the deck. It's hard to say whether I like the deck despite its crudities in production, or because of them. Better to say that I like the deck because its very cheapness and newness mark it as a product of a genuine, continuing popular tradition of actually using the cards to play games as well as read. That tradition abides. The box came supplied with an Italian leaflet describing tarot divination, mostly giving lists of keywords and simple spreads. The flimsy box it contained in had room for more material; you wonder if these cards are also sold in Italy itself with instructions for the tarocchi game.

People with small hands who want a pip card deck of traditional imagery will be happy to own this. It is also fairly inexpensive, and entirely without pretension in its production values. People who want a true Marseilles deck may not be satisfied with this, nor will those who want fine artistry or an antique feel. The cards are cheerful and bright, like you'd expect game cards to be.