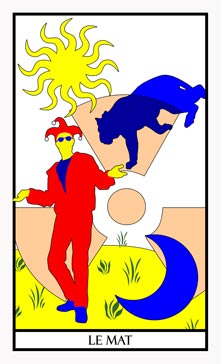 Le Millenaire Tarot de Marseilles is a modern tribute to the Marseilles tradition, and specifically to Nicholas Conver and the Marteau and Grimaud decks. Chris always saw the Marseilles decks as being witty and subversive, and his deck reflects this - it 'follows the basic tradition but has enough deviations, omissions, additions and eccentricities to infuriate the purist!' 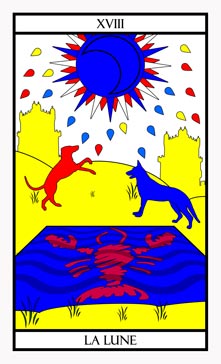 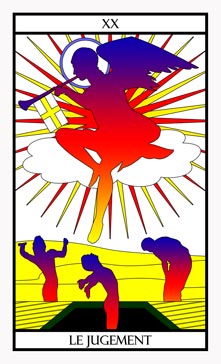 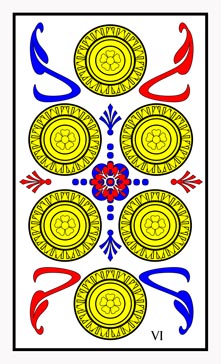 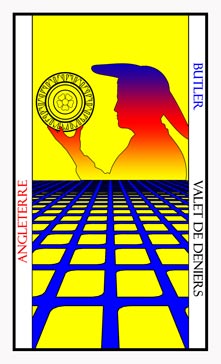 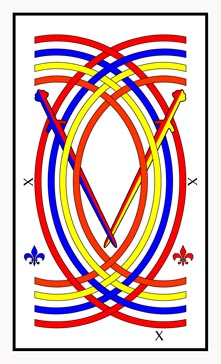 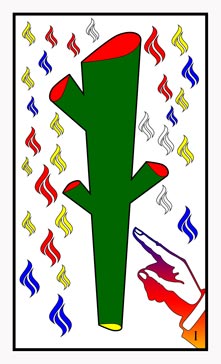 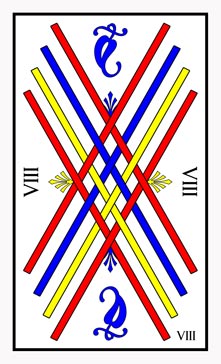 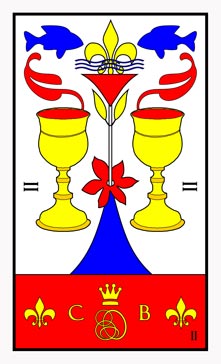 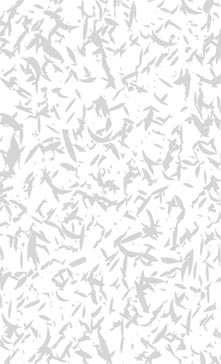 This was a deck I knew I wanted from the moment I saw the online scans on artist Chris Butler’s website, and now that I own a physical copy, I can say without reservation that it exceeded my expectations by leaps and bounds.

Chris has found a way to make a Marseille deck which honors the traditional pattern and at the same time is completely modern. The human figures on the Majors and Courts are silhouettes, which are filled in with vivid rainbow pools of color, graduating from blue to purple to red to orange to yellow. Other symbols on the cards are kept as simple and two-dimensional as possible. Traditional Marseille symbology is already straightforward and uncluttered. By deconstructing it almost into abstraction, Chris has created a fascinating commentary on the centuries-old pattern. The style is comparable in some ways to Robin Ator’s International Icon Tarot, but the Millénaire Tarot de Marseilles definitely has its own style and personality.

The deck was created as an homage to Nicholas Conver. Conver’s 1760 Marseille deck inspired the Grimaud Marseille, which popularized Marseille decks in the 20th century. Like the Grimaud, the Millénaire features flat areas of red, blue, yellow and green, against a white background, with the addition of a deep purple which can be spotted in the rainbow-hued figures.

Marseille purists may prefer to consider this deck as Marseille-inspired rather than a true Marseille deck. Chris fills the deck with many nods to the traditional Marseille, including artist/publisher references (on the 2 of Coins, 2 of Cups, and Knight of Coins), the placement of pip symbols on the numbered Minors, the face on the belly of the Devil, and many of the objects and settings on Majors and Courts. On the other hand, there are also visual references to non-Marseille decks, such as the stars on the canopy of the Chariot, and a repeating abstract design suggesting flames on the Ace of Batons. Some of the visual elements, such as swords and crowns, belong to prior centuries; others, like sunglasses and the “radioactive” symbol on the Fool, are modern. The diamond, spade, heart, and club floating before the Magician are decidedly post-Marseille.

Since categorizations and labels are, in my opinion, completely arbitrary, I have no problem considering this deck as a true Marseille deck, for the simple reason that it evokes what I consider to be the true spirit of Marseille decks, despite, or perhaps because of, its modern visual vocabulary. The study of antique decks can be compulsively addictive, but sometimes a bit dusty. The breezy mix of traditional and modern in Chris’s deck serves as a welcome breath of fresh air.

There are several visual elements in this deck that I particularly enjoy and which I find evocative of meaning. The graduated rainbow hues which fill the human figures’ outlines suggest to me that all people are complex, evolving beings whose thoughts and emotions blend into each other and can’t be diagrammed by arbitrary lines and boundaries. I also enjoy how the simple elements of the cards are often combined in graphically sophisticated ways, as in the Emperor, where three separate color-graduated layers (the shield, the Emperor, and the throne) are laid atop each other. On the Fool card, a sun is placed at one corner, and a moon at the opposite corner, while the space in between is occupied by a wild feline and that “radioactive” symbol, suggesting that the Fool’s task is to bridge the gap between sun and moon, or yin and yang, or any other reconcilable opposites. The rest of the Major sequence could thus be seen as an unfolding of the Fool’s journey as he crosses the gap back and forth between them, a journey filled with dangers and surprises.

Speaking of surprises, check out the paw prints on the Magician’s table. Perhaps they were left by that Foolish feline…

One of my favorite visual devices is the pointing hand which appears on the Aces of Batons and Swords, and on the Death card. In traditional Marseille decks, those Aces are shown with a hand grasping the pip symbols. In the Millénaire, the hand points to the symbol instead, as if the deck were shouting at you, “Look at that!” (Or, more appropriately, “Voila!”, since all the text on the cards is in French.) On the Death card, small versions of the same pointing hand poignantly litter the ground.

On the pip cards, the pip symbols retain their traditional Marseille placement, but the flora and curlicues are new. For readers who rely on the flora and curlicues for reading cues, they offer some new material to work with. The swords and batons are deconstructed into bars of color with no tips or hilts, so the only way to differentiate them is to remember that, as in traditional Marseille decks, swords are curved and batons are straight.

Reading with this deck is a joy. The lack of facial expression allows the reader’s imagination to soar, but there’s always something concrete in the card to anchor one’s interpretation if needed. I can’t really explain why this deck reads well for me; it just does. The cards sing.

Each deck is made to order by Chris, and the physical production is superb. The cards measure approximately 4 5/8 x 2 ľ inches. The color, produced by a six-color printer, is outstanding, much brighter and deeper than one gets with decks published by mainstream publishers. The cards have a lamination with a matte finish which is barely visible to the eye but which feels silky and luxurious to the touch. The cards feel sturdier than mainstream-published decks and are a pleasure to handle. Included with the deck is a cloth bag in appropriate Grimaud colors. Mine was in yellow and blue, lined with a silky red fabric, with a red drawstring.

This deck has immediately become my favorite Marseille deck and is the first deck I reach for when I want to use a non-illustrated-pip deck. The price is reasonable for a hand-made deck, and in my opinion it’s worth every penny.