Each card of the Minute Tarot is unique - it was drawn and coloured in just five minutes. The full 78 cards were completed in just over nine hours to make a charming and very useable set in the Rider-Waite tradition.

Card Images from the Minute Tarot 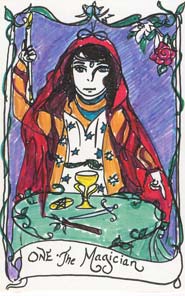 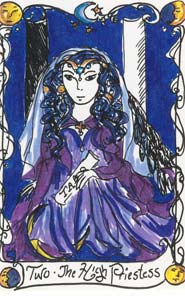 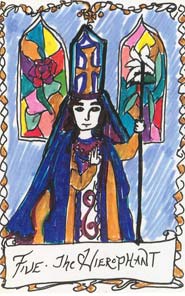 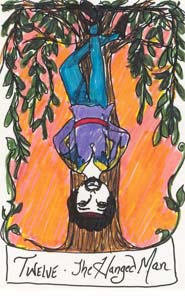 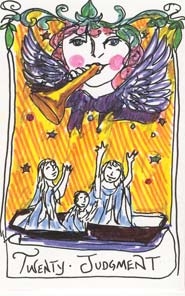 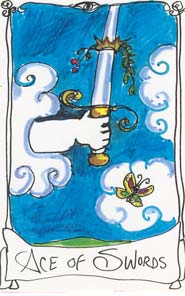 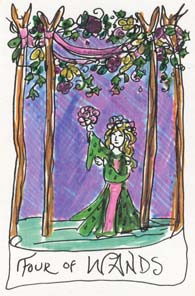 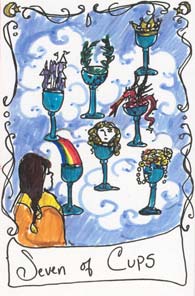 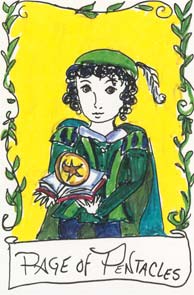 "A tarot of 78 cards drawing on inspiration and limited time!"

The Minute Tarot is a unique Tarot deck that was created in under two days -- just five minutes total were spent by artist Robyn Tisch Hollister illustrating each of the 78 cards.

The deck sprang, ironically, from the midst of Robyn Tisch Hollister’s creative block during the painting of the Tarot of the Midnight Masquerade. The creation of the Midnight Masquerade was a project that involved the paintings of 78 different images - a very long process. During a time of creative block when nothing was going right, Robyn grabbed a pack of glossy blank cards and a set of permanent markers, and set herself a timeframe of five minutes to illustrate each card in the major arcana.

They were finished in under two hours, with no worries about symbolic choices, colours, layout or placement, just a finished Tarot card. Robyn shared them in the Tarot Deck Creation board of the Aeclectic Tarot Forum – and was challenged to complete the rest of the deck and stick to the limit of only five minutes per card.

You might think that a Tarot deck couldn’t possibly be useful if designed so quickly and off-the-cuff, but the Minute Tarot has a charming energy and recognisable symbolism that isn’t cluttered. The Rider-Waite-based scenes and personalities that have been pared down to essentials yet are defined and full of colour. I particularly liked the Hierophant, with the two luminous stained glass windows in the background, and that he is a alone and does not have supplicants kneeling in the foreground.

The printed Minute Tarot cards are a reproduction of the original deck that keeps the plain white backs. I have an un-numbered ‘proof’ copy with slightly thinner cardstock than is usual; it’s perfectly useable, but I’m told that the saleable edition of 100 decks priced at US$35 has better stock. It’s simplicity itself: just the small booklet, the 78 rectangular, small-size cards (around the size of a business card), and a title card in a plain white box.

The companion booklet has simple ‘minute meanings’ of a single word for each card. The majors are linked with verbs, while the minors are descriptions and qualities. There’s also a quick minute deck spread of three cards - What You Need to Know/What You Need to Do/What You Need to Remember. (A note on the website address included at the back: Aeclectic Tarot’s main address is http://www.aeclectic.net.)

The Minute Tarot is based on the Rider-Waite and sticks reasonably closely to its foundation, but has a simplicity that makes it ideal for quick readings. Despite its speed of creation, the Minute Tarot is a portable and readable Tarot deck.

"My hope is that this deck will inspire many more seekers to create a unique vision of the tarot for themselves. There is great freedom and energy is doing them as quickly as possible, and is remains one of the best learning experiences I know of."


Buy from Amazon.com
[an error occurred while processing this directive]

Creator: All Hallow's Tarot, All Hallows Tarot, Tarot of the Midnight Masquerade by Robyn Tisch Hollister