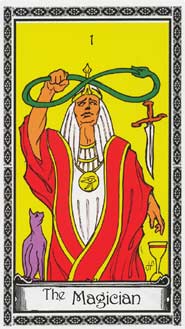 Miss Cleo's Tarot Power was a 78 card deck designed for the notorious 'psychic' reader of the same name. The artwork is Ancient Egyptian themed and has random changes to standard tarot symbolism. 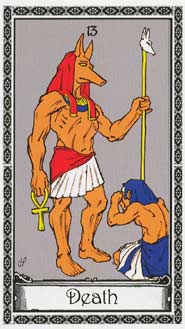 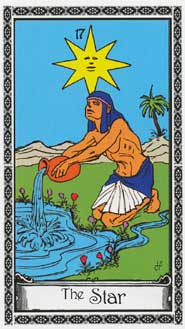 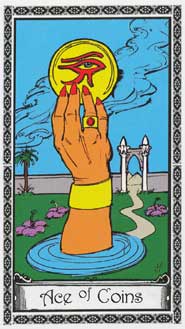 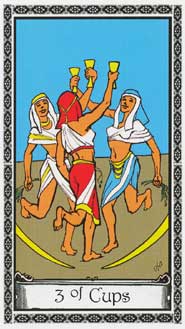 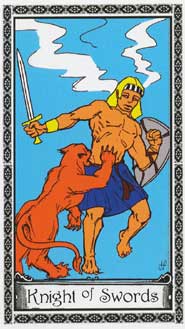 Miss Cleo introduced the Tarot to mainstream America back in the late '90s. Unfortunately it was little more than a common middle of the night telemarketing scam. The company she mascotted disappeared after shady, fraudulant practices such as geurilla telemarketing schemes and billing people who never called were made public.

On the other hand, Miss Cleo's Tarot Power Deck is not so bad. It is a standard Rider-Waite clone with an Egyptian twist. In my opinion the artwork by J.F. Lambert is substandard, but only in the fact that it was apparently sketched very quickly and colored in solid with an old graphics program. The actual sketches are good though - proportionate, but lacking details, shadowing, and highlights.

The esoteric development of the deck mirrors the artwork. Like the vast majority of tarots based on RWS format, Miss Cleo's deck utterly lacks depth. It appears to be a rush-job; a standard rewording of the same old tired RWS text - in this case a stripped-down version. Like many "Tarot experts," Miss Cleo's knowledge of Tarot barely scratches the surface.

The Tarot Power Video is fun to watch if you like to reminisce in the old days when Miss Cleo first introduced Tarot to the world on those silly TV commercials. In the video, Miss Cleo demonstrates a little knowledge of the cards. She first describes the Major or Greater Arcana as worded in the LWB, and then goes over 3 of her reading methods including the 4 Doors Spread, the Past Present and Future Spread, and the Celtic Cross. Her history lesson is distorted, and her claim to be a shaman is outrageous, as she haphazardly reads the cards with little regard to their positions, focusing on only the most mundane aspects. In her bluntness she appears very sure of herself, so one must consider that her familiar spirits might be talking to her. It is possible.

All in all, I have to rate Miss Cleo's Tarot Power Deck as at least average. Personally I don't buy the charade, but then again I've seen hundreds and hundreds of gimmick decks that pale in comparison to the modest level of Miss Cleo's esoteric awareness.