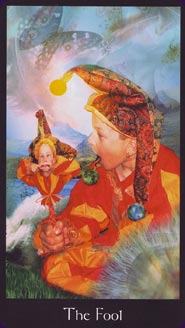 The Modern Medieval Tarot is a mix of the contemporary and the Middle Ages, blended in a smooth photographic collage. Rather than aiming for historical accuracy, it's a surreal dream-like combination of eras. 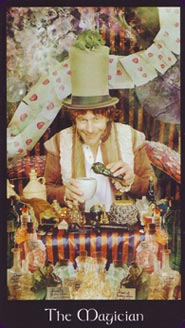 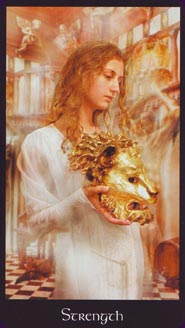 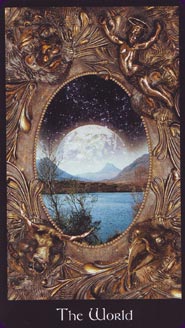 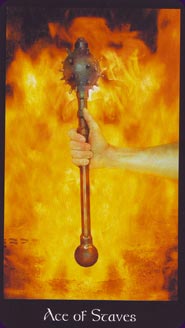 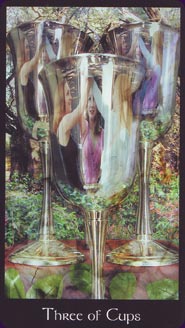 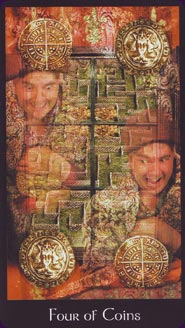 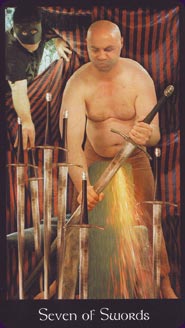 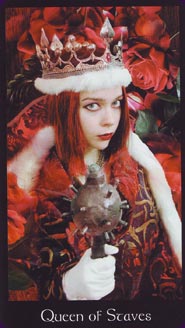 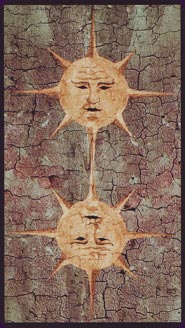 Like many tarot buyers, I am not a huge fan of digital artwork decks. In spite of the power and versatility of graphic design software, computer-illustrated tarot cards rarely manage to be as beautiful or as natural-looking as traditionally illustrated ones. There are exceptions of course, but I was still pretty sure that I wasn’t going to like the Modern Medieval.

The creators of the deck are very clear about what they set out to do. In the LWB they write: “We haven’t tried to re-create accurate historical images as might be found in a period movie, rather we’ve aimed for a surreal and dream like amalgam of the old and new.” Measured against these goalposts, the Modern Medieval is a resounding success. The deck is undeniably modern, created using a combination of photographs and digital collage, yet the style is not only medieval, but gothic, romantic and sumptuous. And although, yes, the images are Photoshopped, the planning, design and creativity that went into creating each one is immediately clear.

Instead of flat illustrations, we are presented with living and breathing scenes. The deck is predominantly photographic, and every human figure is played by an actor – a real person, dressed in medieval-style costume of deep velvet or chainmail, with dramatic make-up and ornate jewellery. In this sense, the Modern Medieval is immensely theatrical and each card has been created as one might create a scene on a stage, using props, lighting, backgrounds and sets.

How authentic the end results are isn’t really important. In the same way that an audience watching a performance of Hamlet must suspend their disbelief and imagine that the sparse stage before them is the Kingdom of Elsinore, so too must users of this deck suspend their disbelief when the Knight of Wands appears in a snarling flurry of smoke and flames ...on his hobby-horse. A minor complaint is that the over-blending of layers is distracting in a few cards but on the whole the digital composition is well done and in some cases strikingly effective, as in the Wheel of Fortune.

In keeping with its theatrical style, the Modern Medieval has a healthy attitude towards tragedy and as such doesn’t hold back when it comes to the ‘bad’ cards of Death, the Devil and the Tower. Unlike many modern decks which tend to ‘sugar-coat’ the difficult messages of these cards, the Modern Medieval relishes in the opportunity to add some drama. While Death’s chilling female reaper looms over an embryonic skeleton with her scythe, a flaming Devil presides over dozens of souls, their faces twisted in agony, and the Tower is destroyed by very realistic-looking flames.

But the deck has a soft squidgy side too, demonstrated most eye-wateringly in the sickly sweet Lovers card which shows a pair of heart-shaped swans surrounded with heart and flower motifs and soft white mist. Fortunately, that card is the exception and Strength, Temperance and the Page of Cups are much more palatable expressions of the deck’s emotional repetoire.

The truly stunning cards are those that reject symbolic noise in favour of one strong direct image. Among the best of these is the Five of Coins, which pictures a man and a woman huddled together against a church door, ragged and barefoot as the snow flurries around them. The Aces are also very effective, emphasising the link between each suit and its element, for example, in the Ace of Swords where the sword is brandished in front of clouds and a clear blue sky.

In terms of quality, the deck neither excites nor disappoints. The cardstock is a little on the thin side but easy to handle and shuffle and has a smooth satin feel. The cards are a standard size (12 x 7cm) and have reversible backs which show a sun symbol against a greeny-grey cracked earth background. The card borders are black with white titles along the bottom edge which suits the moody feel of the deck.

Overall, the Modern Medieval is a success. The digital artwork is still not as attractive as it could be and may not be to everyone’s taste but there’s no denying that the deck is consistent and manages to impress its style on the traditional tarot structure without compromising meaning.