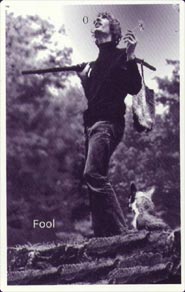 Bea Nettles' photographic tarot, the Mountain Dream Tarot, was originally published in the Seventies - this is a new, remastered edition. The majors and the suits are each tinted a different hue, and the photos fill the whole card leaving only a small white border. 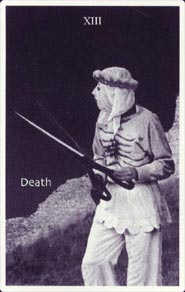 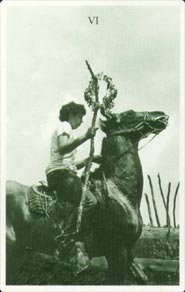 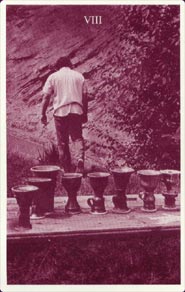 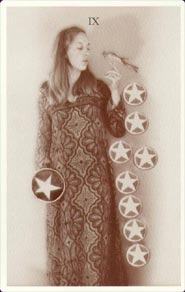 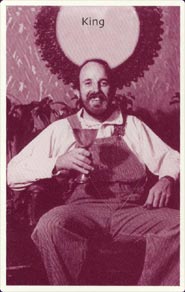 The Mountain Dream Tarot was originally published in 1975. This is a new edition that was treated to the latest in advances in photographic technology. I wrote this not so much as a tarot review but as a personal experience via tarot. I was a girl in 1975 and had no idea that tarot decks existed outside of the Hoi Polloi I purchased from the JC Penney catalogue.

Bea Nettles lives in the Asheville, North Carolina area of the Blue Ridge Mountains. The Blue Ridge is part of the Appalachian Mountains chain that goes from Georgia to Maine. I have lived in N.C. all my life. The Blue Ridge Mountains are one of my favorite places on earth. I was curious what another North Carolinian had to say about the tarot and the Blue Ridge. Bea Nettles captures images nostalgic of the people and scenery there. I grew up in the seventies on a rural N.C. farm. I remember the granny dresses, bell bottom jeans, side burns, and long hair that date this deck.

If you are in your teens and twenties now, this deck will be a glimpse into what your parents and grandparents experienced in the seventies. Historically, this is the era of the Vietnam War ending, the Watergate scandal, and the resignation of President Richard Nixon. However, at thirteen years old, I was more interested in the music of John Denver, roller skating, my friends, and new shows like “Saturday Night Live”. Even if you aren’t interested in what the seventies were like, get the deck anyhow! By the time you hit your forties, it’ll be a crown jewel of your collection because it’s a non-mainstream limited edition.

The deck evolved from a dream Bea Nettles had in 1970 where she decided to do a photographic deck. Since she lived in the mountains, Mountain Dream was an obvious title for the deck. She began the morning after the dream at Penland School in N.C. She enlisted the aid of family and friends in a project that took 4 years to complete. I find it amazing that Ms. Nettles was able to persuade family and friends to go along with doing the deck—even nudes! Even though people were more open to nudity then, people weren’t as open as today. The nudity is handled very tastefully, however. Not only is Mountain Dream a snapshot into the seventies, this deck gives an archetypal portrait of people in Bea Nettles life as expressed through archetypes of the tarot. Imagine the forethought it took to cast them in the right roles. Few people would take on a task as daunting as this. I doubt she accepted any warm body and took pictures. She used imagery from “Pictorial Key to the Tarot” by A.E. Waite as a guide. While th cards mimic the Rider-Waite-Smith, the cards are intended to be intuitive not literally interpreted.

The card stock is rather thin but at $20 a deck plus postage, you can afford to buy a spare. The deck comes in a box perfect for storage. There isn’t a little white book but it’s not needed since the deck is based on the common RWS deck. It reads like your basic Rider-Waite-Smith except the subjects are real people. For me, this enhances the depth I see in a reading. Also included in the package is a brochure about Bea Nettles’ other photographic works and more information about the deck. The photographs are tinted to differentiate the suites and major arcana. The tints are as follows: majors are lavender, wands-green, cups-pink, swords-grey, and pentacles-brown. They have a white border.

Some of the cards are better than others. Court cards have a reputation for being more difficult to read. However, the courts in Mountain Dream are the deck’s greatest strength. In my opinion, reading these courts is easier than any other RWS clone I’ve used. The secret? The character in each subject’s face, relative age, and body language tells you volumes about what each card means. For example, the king of cups is an older man wearing striped overalls. I see him as just finishing his work for the day. By the happy look on his face, the cup in his hand probably contains the alcoholic beverage of his choice to help him relax. The pages look young and inexperienced. The knights are posed with horses as if preparing for a quest. The queens range in age from younger to older. I particularly like how the light touches the queen of wands face while she sits in her comfy old chair outside. She looks like a woman of wisdom and experience. This insight into the subject’s appearance gives the card additional meaning. I find the Fool card particularly symbolic of this generation of idealists. He stares at the sky in child-like wonder. The flower in his hand is reminiscent of hippies and flower children.

The card I like the least compositionally is the Death card. It shows someone covered from the head down in some kind of white outfit holding a huge pair of scissors staring down a black abyss. The costume looks like an attempt was made to draw skeletal ribs but it’s not done well and detracts from the card. I don’t understand why Ms. Nettles deviated from the traditional Rider-Waite-Smith in this card since she had access to horses. Of course, I have no idea about the challenges this particular shot involved. Perhaps the death costume frightened the horse and she had to be creative. But then this is a minor criticism in an otherwise excellent deck.

Appalachian mountain people are sometimes shown in an unfavorable light by the media. Here they are portrayed in a positive, respectful, and realistic image. They are just like everyone else in the world-no more, no less. Mountain Dream reflects a spirituality born of being in harmony with nature. The people in the deck are at ease with themselves and their lot in life. I’ve been to Bea Nettles’ mountains. The Blue Ridge has touched my soul and helped me find myself through the beauty of nature. The next time I go I hope to locate Penland School. Until then, the Mountain Dream tarot takes me back to the mountains I love without leaving the comfort of my home. I couldn’t give this deck higher praise.