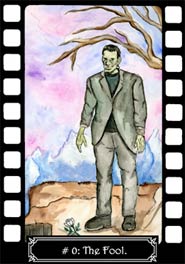 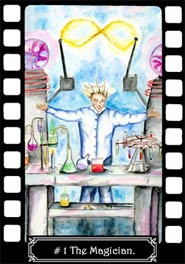 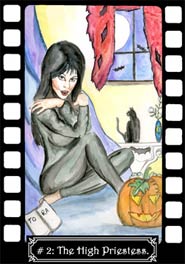 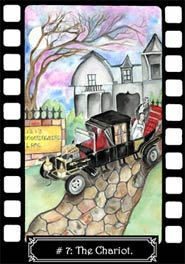 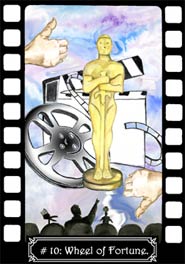 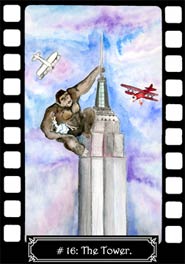 This is a Major Arcana Only deck. There are however 23 cards in it rather than the usual 22, as the artist and creator Samantha Kocsis, has included an extra card, The Universe.

The Universe card aside, the cards in this deck bear the traditional titles of the Major Arcana. Some of the images are derived from the Rider-Waite system. So far, so expected. But because this deck is devoted to movie monsters - "those phantoms and nasties that had us spilling the popcorn", to quote the booklet - the iconography is rather different. The Fool is not a nimble-footed young man with a dog at his heels; it is Frankenstein. He's just been created - he is clearly naive but also dangerously ignorant. The Magician is a man behind a table displaying the tools of his trade. Very Rider-Waite. But the setting is a lab and the man is the Mad Scientist, he could be Dr. Frankenstein himself or he could be one of many other mad scientists in the history of creepy films. Again, Ms. Kocsis remains true to the traditional meaning of the card: we have great potential, we can do great things, but we must be aware of becoming arrogant, perverting our talents for destructive ends. She has even kept the lemniscate-it is an arc of electricity.

The Hanged Man is Dracula, hanging upside-down from a tree-branch with two bats. He is pondering his next move, seeing things from a new point of view. The Reversed meaning points out that if he waits too long, the sun will come up and spell his doom. I'm delighted the way Samantha Kocsis has married the traditional meanings of the cards to these untraditional images. This isn't just a set of movie monster cards with the word "Tarot" stamped on the box. It is rooted AND it takes risks.

Another thing I like about this deck is the Little White Booklet that comes with it. Like many tarotists, I've become a bit tired of LWBs - they are often just a set of vague and cliched interpretations. Typically, they do not explore the actual imagery used or the creator's "take" on the Tarot. I'll go so far here as to say that Samantha Kocsis has totally subverted the concept of Little White Booklets! Her interpretations are not vague or cliched; she does discuss the actual imagery used, going so far as to give us little glimpses into HOW she produced the deck. There are humorous asides in the text. There are also bits of trivia which fans of the genre will lap up (if they don't know them already !) There is also a Movie Monster Trivia quiz (answers given on a separate page).

What about the Universe card? I'll quote from the booklet: "You can devise your own meanings and keywords for it, or use it like a Joker card if you choose... it's up to you, the Audience, to decide." Suffice to say that the card depicts a Tyrannosaurus Rex looking over the planet Earth with an expression of joy/menace/schadenfreude on its reptilian face.

What is this deck like to actually read with? It is good. As I have mentioned, the meanings for the cards are in keeping with more traditional decks. Ms Kocsis has also designed a Movie Monster Spread, which is as follows:

Card 1 : Lead Actor(the role you are playing)
Card 2 : Sidekick (the person or thing that will help you)
Card 3 : The Monster (things that work against you )
Card 4 : The Plot ( the situation you find yourself in )
Card 5 : "The End" (the outcome)


I did a reading regarding my overall situation in the next few months. The cards drawn "felt" right, offering an insightful mixture of enthusiasm and good sense. I have not used this deck for meditation yet but the images are clear yet detailed enough - and big enough - to be used for this purpose.

So who will like the deck? Fans of horror films featuring monsters. People -like me- who recognize Dracula in The Hanged Man and King Kong clutching Fay Wray in The Tower and would like to get to know some more films that provide that frisson. People who want humour and playfulness but not at the expense of wisdom and tradition will LOVE this deck. Admirers of Samantha Kocsis' other decks - Samantha's Tarot and Dolphin Daze Tarot - will want to add this one to their collection. Anyone wanting something a little different would do well to order a copy, as would anyone wanting cues for creative writing. In this last respect,I would recommend this deck for use with the slightly older child who is imaginative and has started to write stories. I would not recommend the deck for purists or for absolute beginners, the first group because the imagery does deviate from the norm and the second group, well, for similar reasons.

The cards and booklet come in a clear plastic box and accompanied by monster stickers and other monster paraphernalia. The cards are slightly larger than average, but because they are laminated, they will stand a lot of use without creasing or fading. The whole project - from images to booklet to presentation to speedy service - deserves full marks. It's a lot of fun!