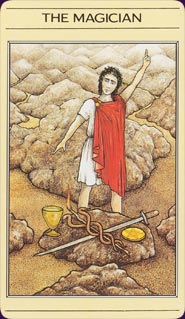 Gods and Goddesses, demigods, heroes and villains from Ancient Greek mythology and legends are depicted on each of the 78 Tarot cards in the popular Mythic Tarot. First published in 1989 and reprinted almost every two years afterwards.


Card Images from the Mythic Tarot 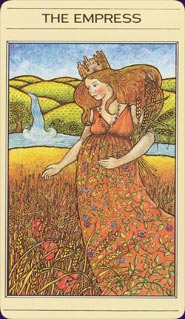 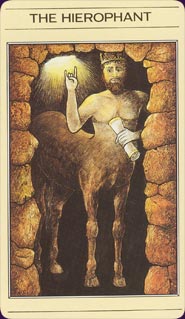 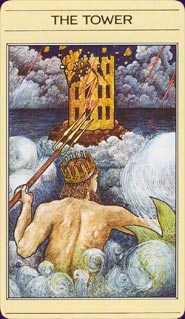 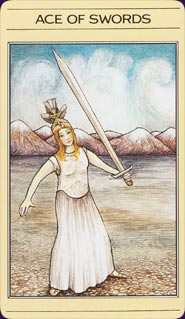 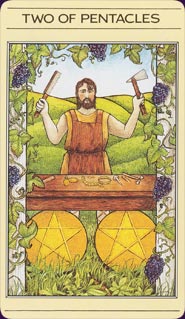 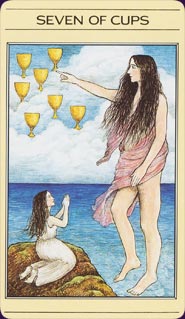 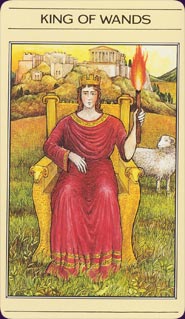 My review is about the Mythic Tarot, which I picked up at a sale on a whim. It was presented nicely in a deep purple box with its name in gold letters, and came with a hardcover interpretation book and a black cloth with the celtic cross spread.

The cards themselves are made of rather thin material, and bend easily. The name of the card is depicted on each card, but not its astrological equivalent or number (for the Major Arcana). Overall, the drawings are rather archetypal in terms of Tarot cards, and the figures are often stiff and "uncomfortable" looking, but the colouring is vivid and the drawing very detailed (you can see each blade of grass in the background.)

In my opinion, the Mythic Tarot is unique in that the Minor Arcana portray Greek Myths - one for each suit - as they progress. (For example, the Suit of Wands portrays Jason and the Argonauts.) However, I find that because of this story-weaving angle, sometimes the depictions on the pip cards do not match their actual meanings as it has to follow the progression of the myth. The Court Cards are mostly nondescript, with a nice touch here or there, but I find them mostly similar.

As for the Major Arcana, some of the cards really stood out for their beauty, including the Star (Pandora opening the Box), the Tower, the Empress and Temperance. But some also struck me as badly drawn, for example the Hierophant (all out of proportion), the Magician and Judgement (the little mummies at the bottom look like Gingerbread Men in toilet paper)!

The interpretation book in particular was a great disappointment. Although well presented, much of the text about each card contained mumbojumbo about the myth and intertwined it with the card's actual meaning. For example, instead of referring to the figure in the Justice card as Justice, the author refers to it as Athene. Therefore, it is sometimes confusing as to whether she is describing the true qualities of the card itself or is merely drawing her own interpretations of the similarities between the qualities of the mythical figure depicted and the qualities of the actual card.

I feel this is a weakness because the myth itself is not actually representative of the card, and also because it made divination difficult if one wanted to have a deeper understanding of the cards instead of reading just the little paragraph at the bottom, which was often repetitive, merely summarized and is sometimes even different from those found in other books. The explanation of the Celtic Cross at the end was all right, and I appreciated the two sample readings, but in its place I would have loved more types of spreads. I feel the Mythic Tarot is not for serious students of the Tarot, and more for those curious to have a look at a different interpretation of the Tarot. To be fair, it IS entitled "A New Approach To The Tarot Cards". :)

*Note: One of my cards was missing and in its place I had two Aces of Swords instead!

I am still fairly new to tarot. I bought the Mythic Tarot after a friend did a reading for me, because this is the deck she uses.

The major arcana depict mainly gods or demi-gods. The numbered cards of each of the four suits in the minor arcana depict stages of a particular story or myth. An example is the suit of cups, which tells the story of Psyche and Eros and relates different stages of the story to the meaning of the particular card. I like the way that the archetypal images of the tarot have been intertwined with the heroes and gods from Greek mythology which are stories that have resonance with most westerners. This combination of the images and the use of Greek mythological characters to depict them creates for me a synergy of meaning that has great power.

The images on the cards are clear and use rich imagery which I like as a visual person, because it helps my intuitive understanding of the meaning of the card in the context that it is in the spread. I have used this deck almost daily since I bought it a couple of weeks ago, and have done a few spreads on the same issue. The cards have been very consistent in their message and the appearance. I believe that these cards are a very reliable guide in my life.

I bought the accompanying book which is very thorough and informative. If you are buying this deck, you should get the book because there is no small booklet in the deck (I bought the deck on its own, not in a 'pack').

For each card in the deck, the book tells us the story, or stage of the story, depicted on the card (literal meaning). It then discusses the inner meaning of the card and how it might relate to the seeker. It then has a divinitory meaning at the end. As a beginner, I have found the layout of the explanations of the cards very useful because if I just want to get the meaning of the card, I only need to read the end paragraph, but if that is not clear, then there is more information and translation available to me to work it out. If I had to highlight a shortcoming of the book, it is that there is only one spread (celtic cross) explained in the book and the explanation is not always very clear for each position in the spread.

For me this deck has really good energy. I am getting to know the cards and this is also helped by the use of the Greek myths. I would highly recommend this deck to anyone starting out or who has an interest in classical studies, mythology, or archetypal imagery.

A brave adventurer battles a fire-breathing dragon. A centaur dispenses wisdom from the darkness of his cave-home. A tormented man is pursued by three snake-haired Furies. This is the world of the Mythic Tarot: dramatic, fantastical, and seemingly far removed from our own modern lives. Yet the creators of this deck are adamant that the myths of the Ancient Greeks have everything to do with modern life and that tarot is the perfect way to prove it. As they write in the accompanying book: “Myth portrays archetypal patterns in human life through pictures and stories. Greek myth is a sophisticated and perennially alive imaginative description of what we are made of inside.”

The focus in the Mythic Tarot is therefore predominantly psychological: it’s all about understanding what makes us tick. But instead of probing deep inside our skulls in pursuit of complex analyses, the deck uses Greek mythology to hold a mirror up to our lives, showing that – thousands of years later – we can learn a lot from the very human stories that can be found there.

Whenever any theme is applied to a tarot deck there is a risk that the basic structure of tarot will be overwhelmed, leaving a collection of images with no underlying meaning holding them together. In the Mythic Tarot, great care was obviously taken to ensure this didn’t happen. There are no changes to the names of the Major Arcana cards and the suits carry the traditional designations of wands, cups, swords and pentacles. In fact, the Mythic Tarot is often touted as an excellent deck for absolute beginners – a testament to its faithfulness to the format of “traditional” tarot.

One noticeable change is in the ordering of the Major Arcana: here we find the High Priestess residing between the Emperor and the Hierophant, and Justice, Temperance and Strength squeezed between the Chariot and the Wheel. No reason is given for these alterations. However, as the cards aren’t numbered the unorthodox ordering becomes less noticeable once the deck has been shuffled.

In the Minor Arcana, the numbered cards of each suit tell a story. In Wands we meet Jason and the Argonauts and their quest to retrieve the golden fleece from the claws of a terrible dragon. The Cups suit follows the developing relationship between the god Eros and mortal princess Psyche, from chance meeting and heartbreak to the happily-ever-after ending. Swords tell the tale of Orestes and the cursed house of Atreus, and it’s refreshing to find there is no holding back on the conflict, strife and suffering of this suit. Finally, the suit of Pentacles tells the story of Daedalus, the skilled Athenian craftsman who built the labyrinth for King Minos of Crete but who struggled with the challenges of both success and failure in his life and career.

The designers have done an impressive job keeping the meanings and portrayal of each card close to tradition, whilst giving each card an extra layer of meaning, so anyone with a basic knowledge of RWS should have no problem transferring their knowledge to this deck. For example, the Six of Wands shows Jason holding the golden fleece in triumph, victorious after defeating the dragon, and the 8 of Cups shows Psyche setting out on a difficult journey to the Underworld, leaving behind her hopes and dreams.

The art is appealing with some very beautiful cards such as the Empress, which features on the front of the box. Hand-drawn in a storybook illustration style, the attention to detail is incredible. For example, in the Queen of Pentacles card every ringlet of hair and blade of grass can be seen. The cards are entirely scenic – there are no ‘stuck-on’ symbols or superfluous elements to interfere with the story – and this is a deck of stories – making the cards very easy to read whether you’re familiar with the Greek myths or not. The court cards do feature some references to astrological attributions – for example, the Queen of Wand’s cat is a lion, signifying the fixed fire sign of Leo – but these are very subtle and can be used or ignored as desired.

At 12.9 x 7.6cm, the cards are slightly larger than usual and may prove difficult to handle for those with smaller hands but there’s no denying the quality of the cardstock, which is sturdy and has a smooth, slightly matte finish. The printing is crisp and clear with vibrant colours and overall the deck oozes quality. The cards have buttermilk coloured borders (a nice change from the usual white) and card titles are at the top in a basic, upper case font. The backs of the cards are fully reversible, with a yellow Greek key border featuring the suit symbols on a plain, navy blue background.

The deck can be bought on its own or with a 215-page book. As well as full descriptions of every card (roughly 3 pages per Major; 2 pages per court card; and a page to each numbered Minor), the book includes the origins of the Tarot, a short background to the Mythic Tarot and tips on how to read and interpret spreads at the back. The book also contains clear explanations of both the myths and how the card might be interpreted in readings and as it emphasises the relation between the myths and modern psychological experiences, is indispensable for a serious understanding of the deck.