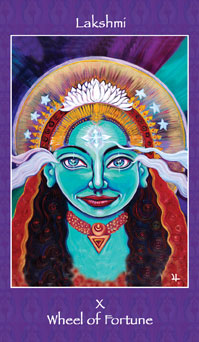 The Mythical Goddess Tarot is designed to help you realise your Sacred Feminine Essence, through access to the many faces of the Goddess. It's a non-standard deck of 78 cards, with images that are vibrant and full of energy. 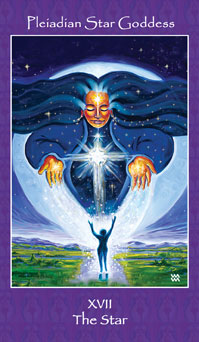 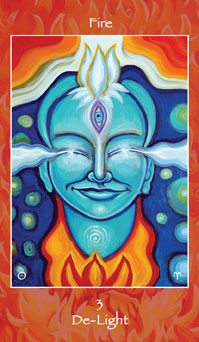 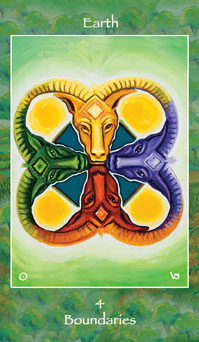 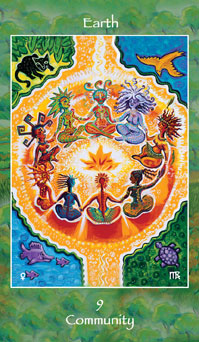 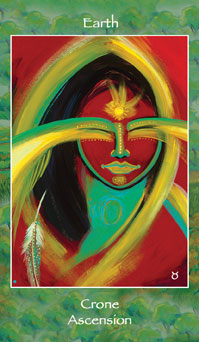 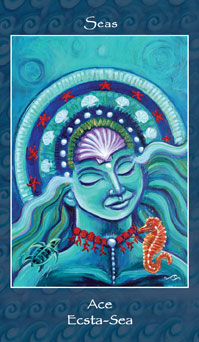 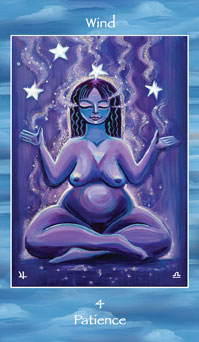 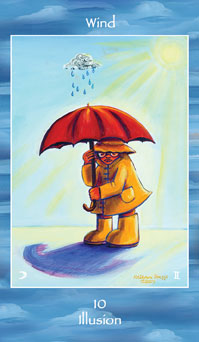 The Mythical Goddess Tarot, the creation of Sage Holloway and Katherine Skaggs, is a transformational deck designed to assist you in realising your true potential, and your Divine Feminine essence. It’s a self-contained tarot set, that can be used on its own without a great deal of prior tarot experience.

Sage Holloway is an intuitive and professional reader, and an expert in vibrational medicine. Her concept for the deck merges “her love of the Goddess and the art of tarot”. Katherine Skaggs, who brought the deck’s concept to reality, is a visionary artist and self-described painter of souls. Her artwork on these cards is mostly timeless, and tending towards abstract, but with occasional modern touches, like the umbrella and gumboots in the 10 of Wind (Illusion).

The major arcana cards show goddesses and female deities from cultures around the world - Christian, Celtic, Egyptian, Chinese, Hawaiian, Native American – with deep purple borders (in slightly varying shades, probably due to the printing process). The titles have been changed to better fit the feminine spirituality theme of the deck.


The suits in the Mythical Goddess Tarot are strongly elemental. Seas (equivalent to Cups) with a strong watery energy and scenes of dolphins, mermaids with flowing hair, waves and waterfalls. Wind (Swords) are edged with a border the colour of a cloud-dotted blue sky, and depict mental states and energy: the 9 of Winds (Criticism) is a strong visual interpretation of this card, showing a red-painted face with jagged lightning bolts streaming from mouth, eyes and forehead. Earth (Pentacles) are edged in a spring green and have images of growing trees, flowers, harvest, community and human interaction. Fire (Wands) have a warm to hot energy with orange borders and flames appearing in many cards.

Physically, the cards are glossily laminated and a little sticky (my cards were stuck together after opening and had to be individually separated before use). The set also includes a 128-page bound companion book, with full-colour illustrations, which is a useful adjunct to the cards.. The cards could be quite easily used intuitively or from prior tarot experience - without a book at all - but the text gives two Goddess spreads, explains a little background on the art chosen for the card, and provides some expanded spiritual teachings and advice.

On first opening the Mythical Goddess Tarot deck, I liked the look of the artwork but wasn’t sure how it would hold together as a workable deck. Reading with it was a pleasant surprise -- the images are full of feeling and energy, and easily useable without extensive study. The colour-coding makes it easy to get a feel for a card (or a spread) at a glance, and the scenes provide a jumping-off point for intuitive understanding. I found it particularly good for drawing a card of the day.

This was my first tarot deck, and since I have been using it for a few years alongside other decks, I feel like I can write a review that does this deck justice.

There are many positive things to be said for the Mythical Goddess deck's function as well as the imagery.

As a Black woman, I have deeply appreciated the representations of women of color in this tarot deck. While in many decks, people of color are completely absent, this is not the case with Mythical Goddess. In fact, I'd go further and say it's integral to the imagery and shows diverse images of the goddesses of color rather than singular, token images. For instance, Yemaya, despite the fact her origins are Yoruban, is often portrayed as thin and white/light, but is beautifully dark brown and curvy in this deck. Not only are the goddesses racially diverse, but there is much diversity in body size and shape. It is so important for a range people to see themselves in the archetypes! And, as someone who prefers to read tarot intuitively and holistically, I can say this deck really excels there too.

Another major highlight of this deck is how strongly the readings connect with one's intuition, and allows one to incorporate other practices. I am able to bring my knowledge of astrology and chakras, and even some crystal healing into my readings with this deck because it is inherent in these cards. This adds even more layers to the meanings of these cards. Although to some this deck might look more like an oracle, I can say in my experience, the accuracy of this deck is on par with my other decks which follow RWS/Marseilles/Thoth!

Beyond the ability to get right to the center of the question/issue of a reading, its style is more of a gentle nudging in the direction one needs to go. This is a deck that meets the person where they are, and guides them to their higher self. Because of this, I have successfully used this deck particularly for readings regarding heartbreaks/relationship difficulties and inner work through chakras. As should be clear, I am very happy with this deck, but there are still things I would change.

While I admittedly follow my intuition more than a guidebook, I do like to read them in order to get a sense of the creator(s) intentions, and the guidebook for Mythical Goddess was lacking. In addition to the language used in the book being too New Agey for me (I prefer direct and accessible language), the meanings also ended up blurring together. Many card meanings repeated the same words and phrases over and over again. While, I like two of the spreads recommended in the guidebook, the spiral spread was confused and scattered for me.

Also, as much as I applaud the creators for a very racially diverse deck, I felt quite uncomfortable with Crow Woman and White Buffalo Calf Woman not being affiliated with their tribes, but rather referred to solely as Native American goddesses, as though Native Americans are a monolith. I also would only use these cards to read for trans and gender nonconforming people with their consent because there is a lot of binary feminine = woman in the imagery, although I feel like the Chariot and others could be read as other genders. I think this speaks to the need for the support of people of a range of identities in terms of race, class, gender, age, sexuality, disability, etc. to create tarot and oracle decks that wouldn't just add to the imagery of the archetypes, but to new meanings/understandings of the archetypes themselves.

I also want to note that while the cards have held up alright in the time I've had them, it didn't take long for the laminate to peel on the sides - I haven't had this issue with other, non-laminated cards.

Overall, I would say this deck is a good start, and great to read with too!