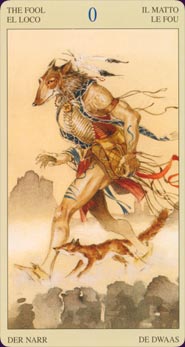 This Italian-published Native American Tarot is inspired by their shamanism, spirituality, and connection with the natural world. The card art is muted, dusty and attractive -- by the same artist who created the Vikings Tarot. 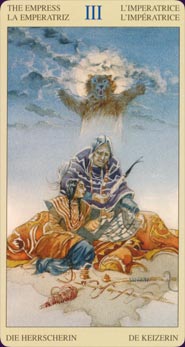 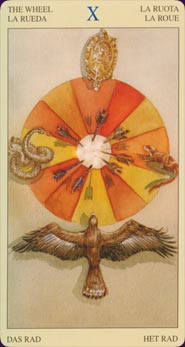 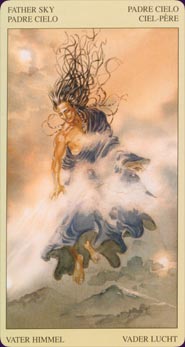 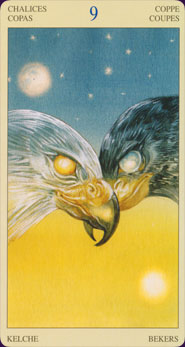 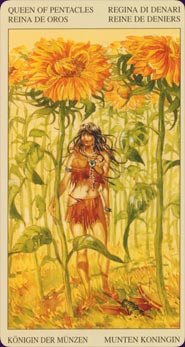 "When the Algonquin turn to Manitou, the Sioux to Wakantanka, the Hidatsa to Gsupa, and to Iroquois to Orenda, they turn to the power of marvelous and the exceptional present in man, in plants, in animals, or in the buzzing of insects in which the wise person recognizes the voices of the gods."

The artwork for the Native American Tarot has been created by Sergio Tisselli, who also created the stunning Vikings Tarot. Like his previous deck, the Native American has a fine, ethereal quality to its art, while still being grounded strongly in the natural world. The skilful depictions of the natural world are painted in muted earthy colours; some very detailed, while others have a misty watercolour look. I’m not sure of the accuracy of this deck’s historical and cultural basis, but from a purely aesthetic standpoint the cards are appealing.

The full deck has 80 cards, including– the “celestial parents”, Mother Earth and Father Sky, which are intended as a positive focal point when they appear in a spread. The 22 major arcana have standard titles but very non-standard images from Native American spirituality and pantheons. Deities and archetypes include:


The suits of the minor arcana are Chalices, Pentacles, Wands and Swords: Chalices are associated with water and zodiacal animals (like the badger, deer and wolf), Pentacles are linked with the earth and nature (bean, maize, fire, tobacco, etc), Wands with fire and objects (mask, arrow, teepee, and shield) and Swords are related to air and totemic animals (such as the rabbit, turkey, fox, horse, and puma). The court cards are Knave, Knight, Queen and King, and all of the minors are fully illustrated in the same style as the majors.

Like most Lo Scarabeo decks, the Native American is packaged with a stapled booklet in five languages. The size of the section in English doesn’t really allow for the communication of much background information and explanation of the chosen symbols and cultural icons, especially as the major arcana cards are altered from the standard and draw on the culture and religious history of several peoples over thousands of years. An example from the booklet:

III – Isnati Awicowan (female initation): The Empress. The moon and the bear allude to the feminine creative power based on weaving. To renew tradition, bringing new energy, one must approach it with a pure heart.

9 of Chalices: Hawk. With the right eye, active during the day (the sun), and the left eye that sees at night (the moon), it symbolizes the superior vision of things.

Father Sky. The sky is the seat of the divine creator, guarantor of the earth’s fertility through rain. From the sky of transcendence and the infinite arrives knowledge and law. Male principle.

I would classify the Native American Tarot as an art deck or a collector’s deck. Given the non-standard imagery and sad lack of companion information, I found it rather difficult to read with the cards, though the art – especially of the Star, the Moon, the Wheel, the Nine of Chalices, and the Eight of Swords – is very appealing.

The Native American Tarot by Laura Tuan is an art deck worthy of any collection. Gorgeous images entrance the eye. The colors are soft and muted in this mid-sized deck. I very much enjoyed the visual aspect of this deck. The Lovers is particularly intriguing showing a goddess figure with a rabbit standing over the male and female figures that seem to be rising from the mud. There are two suns behind them. The LWB offers this interpretation:

"The Twins: The Lovers -- They create the earth by moving the mud and nourish it with the plant of continuity: Maize. Eternity and change, sunrise and sunset pursue each other in the two suns that shine over their heads."

This interpretation of the Lovers is similar to the others. The Empress features an elderly woman weaving with a bear rising up in the sky behind her. And the Hanged Man hangs but is pouring water from a horn to those waiting below him. This echoes the myth of Odin hanging from the tree to gain knowledge for his people.

This deck is neither a Rider-Waite-Smith clone nor a Thoth clone nor even a Marseilles clone. I suppose the closest would be the RWS, but the interpretations are not the standard meanings. For instance the three of Swords interpretation read:

"3 of Swords: Rooster -- It depicts the harmony of the cosmos, discipline and control"

That interpretation would make it more similar to the 3 of Cups than the traditional heartbreak, betrayal and sorrow of the 3 of Swords in most decks.

Given this variation as a standard of this deck rather than an aberration, I would not recommend this deck for anyone who is hidebound. If traditional meanings are important to you, choose another deck unless you want this one for the sheer beauty of the art. However, if you care to branch out and stretch yourself, try this deck. You will have to study and learn this one because it is very different.

This 80 card deck includes Mother Earth and Father Sky which have specialized meanings when they fall in a spread. Another thing I appreciated was the offering of a new spread designed for this deck.

Personally I would want to study the various native myths that revolve around this deck in order to assimilate it more thoroughly. This is a deck I will keep and work with. My thought is that it will make a very good meditation deck.