The Native American Tarot depicts folklore, religion and way of life of several different tribes. Some images show historically authentic traditions from a wide range of tribes, but others are unique to the author. The new suits used are blades, vessels, pipes and shields. 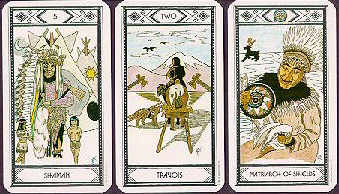 The cards feature soft colors on a predominately white background with black borders. Hand drawn, colored pencil images make up this unique, slightly masculine, southwest deck. The card titles are in English. Suit titles are only on the Tribal Figures (Court Cards) and Ones (Aces). The pips have a individual card titles; for example, rather than the 7 of Pipes it is labeled Counting Cup, 10 of Shields = Harvest, 8 of Blades = Captive, etc.

Card size is 2 3/8” x 4 3/8”, a nice size for smaller hands. 78 cards are with 22 majors and 56 minors in this loose interpretation of the RWS format. The pips are fully illustrated. It also has the title card and a bonus card with the Sia Medicine Song.

There are some differences in the Major Arcana, compared to the RWS. Titles are:


While the LWB does a good job at explaining different folk lore and stories associated with the individual cards depicted. It does not have much in the way of divinatory meanings. The Major Arcanas have no reversed meaning. Leaving it to the reader to use the lessons from the stories and the individual card titles for the divinatory meanings. It might not be suitable for a beginner. It is one of the longer booklets I’ve come across. The LWB also includes some Native American history and 5 spreads.

This is not a deck that would normally attract my attention. I usually go for bold color and computerized artwork. But I showed up at a family gathering without my cards and I was handed this deck by my Mother-in-law, to “pretty please do a reading.” So I gave it my best shot and I was surprised at how easy these cards are to read. The artwork is simple, but it has enough detail to really get a lot of intuitive information for a good quality reading. The Stars card is my favorite “Star card”, out of all the decks I own. It depicts a large spider in the center of a web with small stars scattered throughout the web, reminding me of the dew in the early morning when all seems new and anything is possible.

After this experience I decided that this was a must-have addition to my collection. Anyone that has an interest in Native American decks should take a look at these cards.