Navigators of the Mystic SEA Tarot 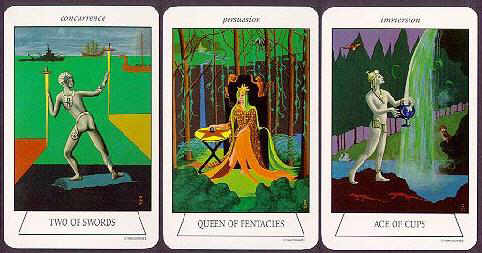 The Navigators of the Mystic Sea Tarot deck is based on the Golden Dawn foundation of the Hermetic Qabbalah, with the Tree of Life on the back of the cards. The artwork is really quite bizarre, but interesting. Previously out of print, it has now been reprinted by the artist.


Card Images from the Navigators of the Mystic SEA Tarot 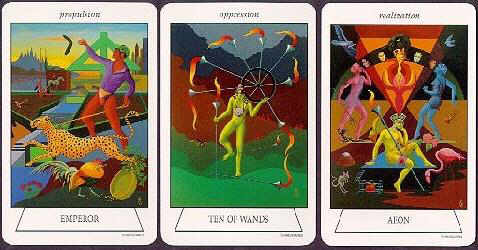 Navigators of the Mystic SEA Tarot Review by Lin Barrett

The "Navigators of the Mystic SEA" deck is descended from the Golden Dawn decks developed in the early part of this century - Aleister Crowley's deck and that of the New Order of the Golden Dawn are the two best-known decks of this type. This deck is very modern in feel and composition, while utilizing the card titles of NOGD; in some cases its minor arcana differ radically from Pamela Colman-Smith's designs for the Rider-Waite Tarot. The Trumps are more consistent with other decks, although NotMS' major difference is that it reverses the order of the Major Arcana cards, starting with the World and working backward to the Fool.

I did not purchase the book with the deck, as I had recently devoted myself to getting "out of my head" while reading, and letting the cards speak, instead of putting someone else's words into their mouths, to coin a phrase. Therefore I can't discuss the philosophical stance the deck's designers derived their order from. In a reading, it didn't seem to matter. These cards have, in readings I've done for others and for myself, consistently discussed the deep reasonings of the soul, the actual personal impetus behind one's acts, rather than commenting on shallower levels of development. They have been accurate in terms of physical-world outcome, and equally accurate in discussing a person's internal motivations.

My first reading with them, done for myself, was rather startling in its depth, like telephoning a casual friend and getting into a soul-baring conversation. I find the "feel" of the cards rather unemotional, not cuddly and familiar; but then I was totally dedicated to Rider-Waite and its descendants before making the acquaintance of NotMS. NotMS doesn't feature nice fuzzy pictures of pseudo-medieval scenes; the cards are accurate emotional shorthand for the energies and situations under study for a particular reading.

NotMS is probably best suited to someone who has studied Qabbalah, number theory, and Tarot theory as well. Anyone who is familiar with Rachel Pollack's work, Jungian psychology, or the innovative number/suit theory studies of Gail Fairfield, will find this deck rewarding to work with. Those whose reading is totally "intuitive" rather than rote-based might also find "Navigators of the Mystic SEA" informative and broadening to use. A beginner might be better served by utilizing Rider-Waite for a while, or an accurate derivative of it, and then moving on to "Navigators of the Mystic SEA."

My bias, as I mentioned, is toward accurate derivatives of Rider-Waite, and I am fairly strict about what "accurate" means - the Robin Wood deck is unarguably lovely, but doesn't meet my standards - Wood made many errors of omission in her deck's details. I found the artwork in NotMS solidly grounded in the cards' meanings, and well-done to boot - few people nowdays get their equine anatomy correct, but NotMS does. The deck is not gender-balanced in its minor depictions, which will aggravate my fellow feminists. It's not a deck for looking at and understanding on a logical basis; "Navigators of the Mystic SEA" speaks to the emotions directly, and I recommend it to non-beginners whose approach is extrapolated beyond the logical.


Navigators of the Mystic SEA Tarot Review by Bonnie Cehovet

“The Navigator sailed the shining seas,
charting a course between sharp, fateful rocks
and perilous cliffs, to harbours’ grateful rest.
And when the journey’s done, sought other quests.
It followed that a tree, long-dead, replied,
y blocking safely death’s long heavy slide.
The Navigator climbed across the wreck,
sighting the eagle, who was destined guide.

The Navigator slept, and saw a dream.
A Library of books set in the heavens,
stretching beyond all logic, Infinite.
And to a special shelf was offered sight.
A figure on the left removed a Book
and in succeeding visions gave a look.
The pages all were blank. To write anew
A fresh philosophy they undertook.

The Navigator scried, to learn the source.
Hermes revealed the holy Cabala.
The archetypes from that eternal base,
create clear symbols which, in turn, embrace
this Tarot of the Mystic SEA. To bind
all Navigators of future mankind,
who chart their unknown course across those seas,
that lap the edges of our inner mind.”

~ (From an extra card with the deck.)

Navigators Tarot of the Mystic SEA is a traditional deck of 78 cards, based on the Golden Dawn formation of the Hermetic Cabala. The Major Arcana retain their traditional titles, with the following exceptions: Universe (World), Aeon (Judgment), Art (Temperance), Suspension (The Hanged Man), Destiny (Justice), Fortune (The Wheel of Fortune), Arch Priestess (The Priestess), Magian (Magician). Strength is VIII, Destiny (Justice) is XI. The suits are entitled Wands, Cups, Air and Pentacles. The Court Cards are entitled King, Queen, Knight and Page.

The Navigators of the Mystic SEA was created specifically for use as a teaching and meditative path in the search for self-knowledge. The four suits represent four different aspects of the psyche: Wands represent Intuition, Cups represent Emotions and Dream States, Swords represent Intellect, and Pentacles represent the Five Senses.

In the accompanying Little White Book (LWB), Tark suggests that the Seeker can get to know the archetypes of the Major Arcana by meditating on a single card, or by using the Web Spread presented at the end of the LWB. Tark also notes that the Navigators Tarot has the potential to depart from the traditional Golden Dawn sequence of cards and paths (particularly in the Major Arcana). This inversion is called the “Way of Return” (which Tark also calls the “Way of the Future”).

The cards themselves are 2 ľ” by 4 Ľ”, of good quality card stock. The back of the deck has a ˝” white border on the toip and bottom, and a smaller white border on both sides. The background for the center of the card is multi-colored and “fuzzy”, with the center image that of the Cabalistic Tree of Life, with the ten Sephiroth and the accompanying paths done in color. The ten spheres and the 22 paths make up the “32 Paths of Wisdom” by which an individual comes to know themselves.

The card faces show the same white border as the card back. A keyword (representing the most important quality of the card) is written across the top in small black lettering, while the card title (for the Major Arcana), suit and number (for the Minor Arcana Pips), and title and suit (for the Court Cards) are written in larger black text across the bottom of the card. The Major Arcana are not numbered, so that the inversion placement system may be used if desired.

The art in this deck is of a surreal, fantasy quality, with people and things floating around the cards. The colors are quite intense. Skin tones differ from card to card – gray, green, red, yellow, black, purple – it’s all there! The figures seem posed – as if they are in some type of formal dance movement.

The background in the cards is very much of a fantasy, dream quality. People and things seem to be suspended in mid air, and we see wide swoops of color, androgynous figures, futuristic architecture, sci-fi type animals and more.

Some of my favorite cards include the Two of Pentacles (keyword permutation), where we see two figures facing each other, each with the Pentacle symbol in one hand, mirroring each other in a dance type pose; the Magian (keyword encapsulation), which shows a purple figure floating inside a bright yellow hexagram; and the Empress, which shows a green figure holding a golden pear shaped item out to a white swan. Other forest animals are in the background, and a beautiful butterfly is flying over the swans wings.

This is a decidedly different deck, but it has the advantage of taking the reader and the Seeker out of any ruts that they may be in. This is a deck that would appeal to collectors, to individuals that find fantasy art appealing, and to those that already have a fairly good knowledge of the Tarot. Because of the androgynous nature of the figures, this deck could be offered as one of a choice of decks to a Seeker for a reading.


Complete Details of Navigators of the Mystic SEA Tarot


Similar Decks to Navigators of the Mystic SEA Tarot