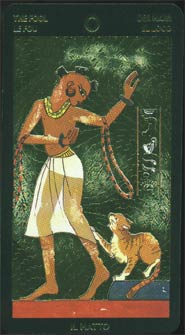 An ancient Egyptian Tarot themed deck with a difference - Nefertari's Tarot has a background of goil foil to the themed illustrations on the cards. This deck is stunning, and the actual cards look even better than the digital images.


Card Images from the Nefertari's Tarot 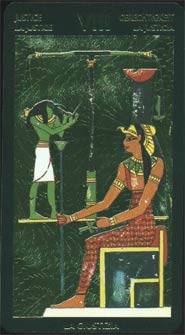 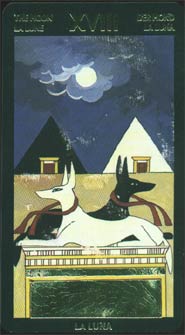 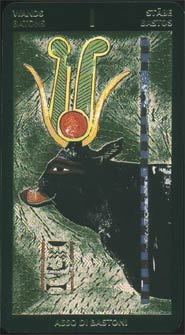 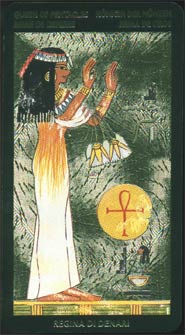 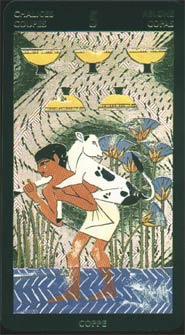 Nerfertari's Tarot is an impressive tarot deck, fittingly subtitled 'The Light of Egypt: Ramses Bride'. Don't open it in full sun; you'll be blinded by the flashing light bouncing off the surface of the cards.

Nefertari, according to the booklet, was known as the bride of Ramses II, Pharaoh of the XIX dynasty in ancient Egypt. The tarot deck named for her is, of course, Egyptian in art and symbology. It is a 78 card deck, and has scenes on all cards, not only the major arcana.

This deck is also the luxury version of the Tarot of the Sphinx. Both decks by Silvana Alasia have the same ancient-looking artwork, but differ in base colours. The Sphinx deck uses blue borders and a white scene background; Nefertari's has black borders and gold foil instead.

The effect of all the textured gold foil is very visually sumptuous. The aged-look Egyptian people and scenery evoke the mystery and luxury of life in the height of civilised Egypt. You need to see the cards in person to truly understand their lustre, as digitally scanned images do not catch the light in the same way and the cards look much duller.

The cards themselves are rectangular, with slightly rough edges. I found it more difficult to shuffle with the deck, which I think it is due to the gold foil, but it isn't a huge problem. All cards are printed with the number of the card centrally placed at the top of the card, and the suit or title printed in four languages around it; English, German, French and Spanish and the Italian title at the bottom. The backs of the cards are black, with the eye of horus repeatedly printed; half facing one way, half facing the other so the cards are reversible.

The little white booklet that is packed with Nefertari's Tarot cards is thin, the card meanings are specific, brief, and very blunt. (King of Wands: 'Friendly man; honest and scrupulous country gentleman. Honesty, news of an unexpect inheritance.' Four of Swords: 'Vigilance, retirement, loneliness, the lonely retreat, exile; grave and coffin.'). Newcomers to tarot may want a thicker book of potential meanings and explanations, but more experienced tarot users should be able to work with the art and refer back to the booklet only occasionally.

Noone's tarot collection is complete without a copy of Nefertari's Tarot. It is excellent for Egyptologists, but even if you aren't a fan of ancient Egypt you have to admit the cards are stunning.

The theme of the gold foil background is included on the box - which makes for a very impressive, eye-catching presentation. There is no book (that I know of) that accompanies this deck, which is a shame. The background for this deck is an Egyptian theme, based on Nefertari, bride of Rameses II, Pharaoh of the XIX dynasty of Egypt, and one of their greatest Kings. According to the LWB (Little White Book) that accompanies the deck, Nefertari was a very hands on Queen, taking an active part in the temporal government of the kingdom.

The deck itself is 2 5/8" by 4 3/4", of high quality cardstock and a usable size for smaller hands. The backs are black, and carry an inverted image of the eye used on the box cover (in silver) as a motif. It would not be noticed whether cards were drawn in the upright or reversed position.

The card faces carry a stunning gold foil background, with black borders. The titles for the cards are in five languages: Italian on the bottom, and English, French, German and Spanish on the top right and left hand corners. The Major Arcana carry Roman Numerals on the top of the card, while the Minor Arcana Pips carry numbering.

The art carries is very stylized Egyptian motif, using symbols, hieroglyphics and what seem to be stories of the Gods/Goddesses. I say what seem to be God/Goddess stories, because there is no background or explanation given anywhere in the LWB for the art. This deck could definitely use a book, because I don't think there are all that many of us that have a grounded background in Egyptology.

The LWB, thankfully, is in English. There is minimal information presented, and it is presented in an accordion style booklet - my least favorite of all! The one spread that is presented - entitled "Finding Your Own Goal" is one that I had not seen before. It is a six card presentation focusing on a particular goal of the Seeker. It addresses the subconscious desires of the Seeker, as well as any fears that they may have, and ends with a card that represents what the Seeker truly wishes for. I like this one - it is very client oriented and "usable".

The presentation of the cards is minimal - a basic meaning for the card, and sometimes a mention of the God or Goddess portrayed. The only manner in which reversals is addressed is that they are generally treated as "almost the contrary" of the upright meaning, and as something that each reader needs to determine for themselves.

Every single card in this deck is incredible - due to the use of the gold foil background, as well as the Egyptian motif. One of my favorite cards is Death, which is portrayed by the Ibis figure of Anubi, God of Death. On either side of the main figure we see a male and female figure kneeling, with hieroglyphics to the right hand side.

Temperance also has its day, portrayed by the an unnamed, winged Goddess, kneeling, with her wings outstretched, and two vessels sitting between them. Above her wings we see two panels of hieroglyphics.

The Queen of Pentacles shows a youngish, happy Queen, standing with her arms raised to shoulder height. and held up, palms out. She wears gold bracelets on her left arm, and appears to have a feathered ornament hanging from it. Hieroglyphics are also used, along with a red Ankh in the middle of a bright yellow circle.

The Ace of Cups is an interesting fellow - a bright yellow cup resides on the bottom of the card, with a picture of what appears to be a scarab in the middle, with hieroglyphics on either side.

The Ten of Cups shows three cups along the bottom - two upside down and the middle cup upright. Above them we see a male figure serenading a female figure, with seven upright cups above them.

The Knights are also quite interesting in this deck - they are all portrayed as riderless horses!

This is an excellent deck to add to a collection as a representation of Egyptian decks, or as a meditation or reading deck for someone with a sound background in Egyptology. I would not recommend this as a reading deck for the general public, as the symbology would not be understood, and they would not be able to connect with it. My personal thought is that one would need to be very careful shuffling the cards (and handling them in general) because of the gold foil. Having said that - this is a stunning deck, and if you think this deck might have a place in your collection, don't hesitate - it is well worth the purchase price to a collector!