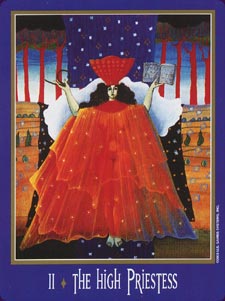 A Rider-Waite style Tarot, these reworked cards are artistically unusual and coloured with rich, strong hues. The artwork of the New Century Tarot is very striking, particularly in the the major arcana. 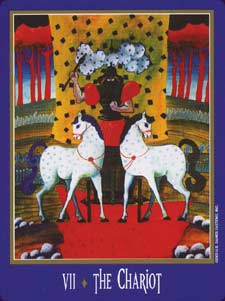 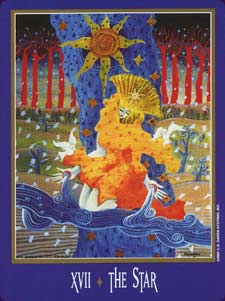 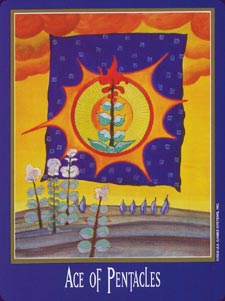 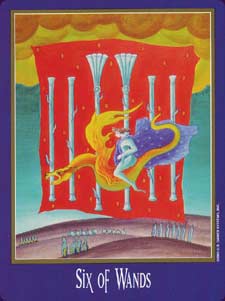 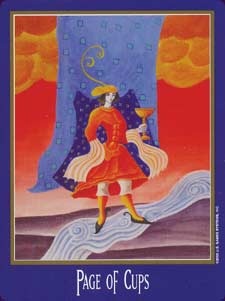 The New Century Tarot is a striking Tarot deck from US Games Systems, created by German artist and architect Rolf Eichelman, who began to develop his cards in 1989. According to the companion booklet, he received inspiration from a present from his wife - Stuart Kaplan's book, Tarot Classic - and began on the major arcana cards while on holiday. More than ten years later, in 2002, he created the fifty-six cards of the minor arcana and completed the full deck.

Eichelmann's art in the New Century Tarot definitely has impact, with its distinctive, original style and consistent use of strong colour. It is peopled with bold and compelling figures, set in natural landscapes sombre, but majestic. All cards have a patterned tapestry-like backdrop running down the centre behind the main figure or suit element, and the colours of this backdrop change for each major and each suit. In the far background, all majors have a palisade of reddish trees silhouetted against a navy sky, the foliage of which changes subtly for each card. To me, the cards have a medieval atmosphere, and remind me slightly of the Dante Tarot - though this deck has more finely featured people and is set in a more realistic world.

Symbolically, this deck is a reworking of a 'standard' Rider-Waite style Tarot. The cards have standard titles. Page, Knight, Queen, King. Swords, Cups, Wands, Pentacles. The major cards have kept their main symbols and titles, but artistically they have been renewed by placement in a natural background of natural detail and rich colour. These minors are lively illustrated pips, showing the correct number of suit symbols in a differing pattern on each card. The tapestry lies behind the suit symbols, then a pared-down Tarot scene is in front of or entwined with that. The court cards are a little bare, and with fewer cues for interpretation beginners may find them harder to interpret than usual.

Of all the cards, I like the Wheel of Fortune and the High Priestess card the most. The treatment of the High Priestess, in her reddish gown that is just translucent enough to show through her body and the stars of the backdrop, is stunning. The rest of the majors are also compelling, though I noticed a difference in the quality of the major and minor arcana. Where the majors are consistently very detailed and powerfully coloured, the minors do not appear to have quite received equal time and attention. They are interesting and skilful enough, but they don't have the power of the twenty-two majors.

In the hand the cards are large, quite squarish and printed on stiff, fairly matte cardboard. The backs have a reversible, organic pattern of black, blue, purple and red, while the faces are elegantly bordered in dark blue with an inner border in gold ink.

On the whole I found this to be a fresh transformation of a Rider-Waite style Tarot by a talented artist. While I didn't find it groundbreaking in insight, it is arty, compelling and eminently useable, especially if you're fond of cards with brilliant colour. One for the reader who is past the beginner stage, or the keen collector.

New Century Tarot is one of the latest works to come from U.S. Games, and certainly is a good representation of their quality and vision. It also has the distinction of being birthed from the work Tarot Classic, by U.S. Games head Stuart Kaplan. Eichelmann received the book from his wife as a gift in 1989. From it, he received the inspiration to bring a new deck into the world.

The Major Arcana was sketched while vacationing on the island of La Gomera (one of the Canary Islands). Eichelmann then went back to his native Germany, where in the year 2002 he finished the deck.

While following the thought and structure behind the Rider-Waite Tarot, the artwork is quite different - stunning and unique. I have never seen another deck that has been done in this manner. The colors are bold, vibrant statements. They jump out from the cards and grab your attention! The manner of dress for me is reminiscent of Medieval style dress, exaggerated in a fantastic manner, with wide shoulders, flowing sleeves and voluminous skirts.

The cards are 3 1/4" by 4 3/8", on good quality card stock. They are easily handled by those with smaller hands. The backs are a deep purple with a pattern in black, orange and light blue superimposed over the background color. Reversed cards would not be able to be determined from the back of the cards.

The card faces carry a 1/4" deep purple border, with a smaller gold border edging the inner illustration. Card numbers and titles are in white across the bottom. The Major Arcana all carry the same landscape: in the upper half of the card we see a line of trees across the horizon, done in a reddish hue. In the lower half of the card we see an open landscape, with figures, plants and animals in the foreground. An interesting technique has been applied here, in that each of the figures is portrayed in front of a different colored "veil". The cards become surrealistic - but do not lose their intent and purpose (archetypal quality). There is another interesting anomaly here - the Fool carries the number 0 (Zero), yet in the accompanying LWB (Little White Book - which was translated from the original German), and in the organization of the cards straight from the package - he is placed after the World.

The cards in the suit of Cups all show a red sky with crimson clouds. The ground is in shades of gray and violet. Each scene shows a light blue patterned veil, appearing to drop from the sky, on which the cups are presented. The court cards are shown in front of the veil.

The cards in the suit of Swords all show a blue sky, with clouds in a reddish hue. The ground is in shades of gray and violet. Each scene shows a yellow patterned veil, on which the swords are presented. The court cards are shown in front of the veil.

The cards in the suit of Pentacles all show a yellow sky with reddish clouds. The ground is in shades of violet and gray. Each card contains a blue patterned veil upon which the pentacles are presented. The court cards are shown in front of the veil.

The LWB is the only book out that I know of for this deck. It carries an explanation of the coloring for each of the suits and the Trumps, with a small write up on each of the cards. There is no explanation of how to use the cards, nor of the thought process behind them. I like the cards a great deal - and would love to see a book that explained them a bit further.

Wearing a transparent red dress, the High Priestess stands with outstretched arms on a blue carpet. She is serene - she is a goddess and woman in one person.

The crown on her head is open like a cup, symbolizing the receiving woman. Yet at the same time she is closed by the moon inside; the symbol of priestess as representative of the gods.

She holds a wand and a circle in her right hand. The wand is a symbol of transience, the circle infinity. In her left hand she holds an opened book, offering a glimpse of the knowledge she has to offer.

Card Meaning: Intuition, patience, mysterious knowledge, female power, a visionary, or someone skilled in medicine. Also depicts the veiling of true intentions, one who has bewitching and destructive powers.

Five swords are arranged horizontally with five more resting perpendicular. The largest perpendicular sword has a red stone embedded in the handle. On either side of the sword arrangement there is a figure standing bound cocoon-like in cloth amidst a cloudy vapor.

Card Meaning: The Ten of Swords represents sorrow, grief, pain and divorce. The end of a situation. The red stone appears as a glimmer of hope.

The Page stands in the middle of a river wearing a red robe. His expression is tender, and he dreamily looks off into the distance. In his left hand he holds an opened cup.

Card Meaning: The Page of Cups stands for softness, playful amusement and an agreeable impulse. It can also indicate someone who is very emotional, delusional and secretive.

There are several cards in this deck that I feel a strong pull towards. On of them is the High Priestess. From the description above, you will realize that the High Priestess is shown nude wearing a red, see through dress. Sounds tacky, but the effect is great on the card! Lots of wonderful energy!

The Empress is another compelling card. A young, dark haired woman in a deep blue, flowing gown with white sleeves is shown seated, with her head bowed to a white bird seated on her left arm. The book describes the bird as an eagle - but it looks more the size and coloring of a dove to me. On her right hand you see a reddish-brown scepter.

The Hanged Man appears in front of a reddish-orange veil - so that the energy of fire, of change seems to surround him. He is hanging from a crossbar held between two decorated columns. His face is turned towards the front of the card - towards the viewer. This card carries a great deal of energy, but the columns themselves seem somehow "inappropriate" to me - not "serious" enough.

The Moon, being one of my birth cards, always fascinates me. In the center of the card we see a pale blue full moon, with a yellow, sickle shaped crescent moon on its right hand side. Two wolf like figures, with reddish coats and black faces are in the forefront of the picture - one on either side of a flowing stream, howling at the moon. A green snake winds itself around the wolf on the left hand side of the picture. In the background we see a stone tower, with two faces appearing in the window to watch the scene.

The Page of Cups is an interesting figure. He appears in bright orange garb, with flowing yellow sleeves, holding an upright yellow cup in his left hand. From his cap we see a large feather emerging. He is standing in the middle of a river (appearing to walk on water).

There is much symbolism in this deck - just not that which one normally sees. This deck would be a good deck for meditation or spiritual work, and could easily be used as a reading deck. I would recommend that the reader have a solid background in Tarot before attempting to read with this deck.