The Nightmare Before Christmas Tarot 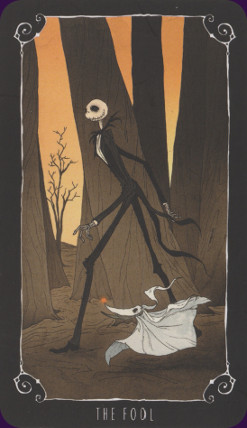 Also known as Tim Burton's The Nightmare Before Christmas Tarot

The Nightmare Before Christmas Tarot is the 78-card Tarot version of Tim Burton's animated Christmas classic. Characters from the film become the major arcana, while moments and scenes become the minor arcana.


Card Images from the The Nightmare Before Christmas Tarot 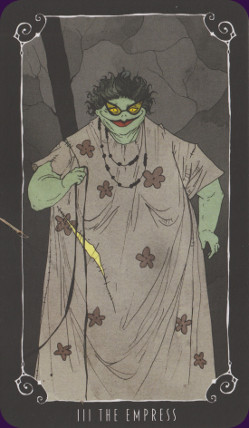 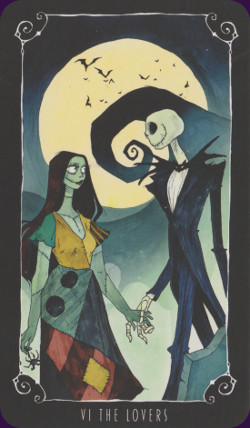 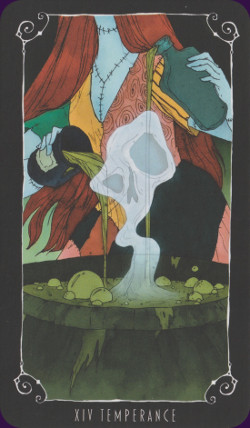 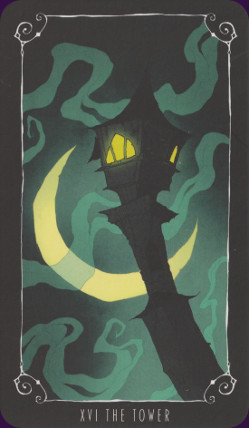 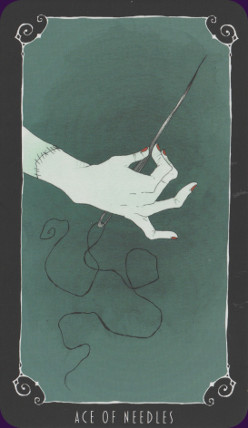 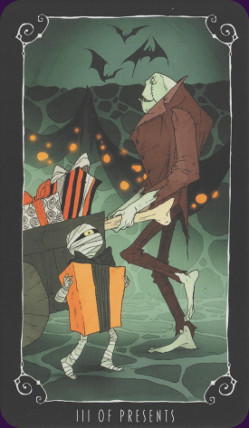 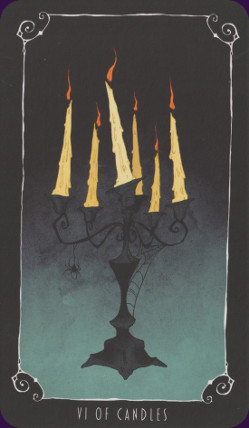 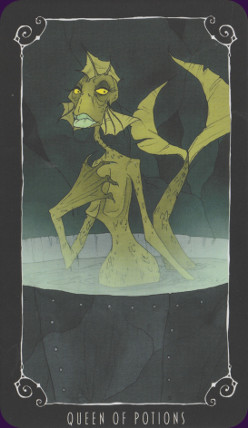 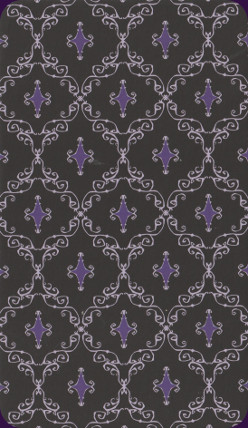 The Nightmare Before Christmas Tarot Review by medusawink

Tim Burton’s The Nightmare Before Christmas is an animated (stop-motion) Christmas classic beloved by Goths, children, and adults (probably in that order) everywhere. If you haven’t seen it then you probably should because a) it is a lot of fun, and b) it will give you a lot of insight into this tarot deck.

The Nightmare Before Christmas tells the story of Jack Skellington, Pumpkin King of Halloween Town, who upon discovering a portal to the world of Christmas decides to take over that holiday, kidnapping Santa and appointing himself the new King of Christmas Town. He fails to understand the true nature of Christmas, and instead ‘Halloweenizes’ it and in doing so terrifies the good people of Christmas Town. Eventually Jack sees the error of his ways, and rectifies the problems he has caused. He is accompanied in his adventure by an odd assortment of hench-creatures, the odd villain, and Sally, a charming heroine and love interest.

The Nightmare Before Christmas(TNBC) Tarot Deck is a traditional tarot based on a close reading of Tim Burton’s TNBC film. Characters from the film are used to embody the archetypes of the Major Arcana, while moments and scenes are used to capture the actions and intents of the Minor Arcana. For you to get the best out of this deck at least a passing familiarity with the film is advised – because the deck relies heavily on the reader’s familiarity with the film’s story and characters to make connections between character and actions. Sure, you can read the guidebook and take the author Minerva Siegel’s word for it that Oogie Boogie is the bad guy, or you can just watch the movie and *know* that Oogie Boogie is the villain of the piece. This is a 78 card, fully illustrated traditional tarot deck. It has 22 Major Arcana and 56 Minor Arcana, divided into four suits of 14 cards each.

The suits are Candles/Wands, Needles/Swords, Potions/Cups, and Presents/Pentacles. Each suit has 10 number card and 4 Court cards – Page, Knight, Queen, and King. The Major Arcana follows A E Waite’s ordering and titles.Although the suits of the Minor Arcana have been renamed, this is merely cosmetic – the fundamental meanings of the suits remain the same.

The cards measure 70 x 1 20 mm – which is a fairly average size for a tarot deck, being both a wider and considerably longer than a standard playing card.

The card stock is good, being lightweight and fairly flexible. The finish on the cards is unlike any that I have encountered before. While not exactly vanta black the cards do not have any sheen on them whatsoever. The texture is smooth, soft, almost velvety – a real tactile pleasure.

The cards have rounded corners which makes for a smoother shuffling experience, as well as preventing wear and tear at the point where the cards are most vulnerable to chipping, peeling, and becoming dogeared.

The cards are relatively easy to shuffle, however the finish does make them tend to clump or stick together a little - this may change after the cards have been handled a bit and the newness has worn off.

The print quality is excellent. The images are a study in contrasts between dark and light, with clean lines and strong colours. There are no misprints, no blurring, no colour blots or bleeds – each image is clean and bright.

The artist, Abigail Larson, is a well-known illustrator who specialises in Gothic fantasy subject matter – she also illustrated the recently released Dark Woods Tarot. She uses a mixture of traditional (pen and ink?) and digital art to produce her unique imagery; her sharp angular style and glowing colours are instantly recognisable.

Larson’s pallette for the NBCT is broad - a spectrum of greys, greens, and shades of murky teal with highlights in vivid, blood red, glowing yellows, and the occasional splash of pumpkin orange. She skilfully evokes the world at night – the flickering light of candles, dimly lit rooms, the endlessly dark night sky, the shadows cast by moonlight.

The images are bound by a thin white line of decorative frame, which is in turn surrounded by a broader black border. The titles of each card are given in a fine white font at the base of each image.

The design on the back of the cards for all the world looks like purple and black flocked wallpaper, and is symmetrical and reversible.

The cards come packaged in a solid cardboard box with a liftoff lid. The cards are seated in a close fitting well in the box with the guidebook placed on top of them. There is a purple satin ribbon that threads beneath the cards and enables the user to lift them out of the box easily. The interior of the box is printed with more of the retro flocked wallpaper design. While the outside of the box is printed in grey and purple stripes, with the back of the box featuring reproductions of cards, as well as publisher’s details. The lid is printed in black and grey, again with the flocked wallpaper, while the titles are printed in gold foil and contained in an ornate, purple, spot laminated curling frame of vines and spiders.

This is a relatively compact box set that could easily be slipped into a shoulder bag or backpack without adding noticeable weight or taking up a large amount of space. The box while sturdy is only made of cardboard and if treated roughly will start to show wear and tear.

The 126-page guidebook is written by Minerva Siegel, author of Tarot for Self-Care. The book is divided into five main chapters – Introduction, Understanding Your Tarot Deck, The Major Arcana, The Minor Arcana, Tarot Readings.

The Introduction is brief and gives the reader a basic framework to understand this deck.

Understanding Your Tarot Deck familiarises the reader with the structure of the tarot. It introduces the concept of the Fool’s Journey and the significant life lessons contained within the Major Arcana. It also introduces the suits of the Minor Arcana and briefly outlines what each represents.

Each card of the Major Arcana has a double page mini chapter to itself. One page is a larger than real life full-colour reproduction card in question on the other page is a brief description of what is happening in the illustration, the card’s narrative. This is followed by an upright divinatory meaning and a reversed divinatory meaning. These interpretations are quite traditional, and the advice given is sound, common sense, and constructive.

The Minor Arcana cards are given a single page for each, featuring a small scale full-colour reproduction of the card, no description – but that’s okay these cards are much simpler and have much less detail than the Major Arcana cards. An upright and reversed interpretation is given for each card – again the advice is solid.

Tarot Readings gives the reader information about how to care for your tarot deck – which essentially boils down to as much or little ritual as one chooses. There is instruction on how to prepare for a tarot reading – again this can be elaborate or simple. Several layouts are included, each based on a moment from The Nightmare Before Christmas movie. Eureka is a simple three card spread; A Peek Behind the Cyclops’s Eye – another three card spread; a five card spread is called Blown to Smithereens.

While it is easy to see the attraction in the novelty value of this deck, it really is a well thought out tarot which is intended to be functional rather than cute. Fans of Tim Burton’s movies may find some interest in this tarot; however if you really love The Nightmare Before Christmas movie then you will really love this deck. If your tastes run to the Gothic you can’t go past this – it is both fun and functional while appealing to those dark and shady parts of your imagination/soul.


Complete Details of The Nightmare Before Christmas Tarot


Similar Decks to The Nightmare Before Christmas Tarot