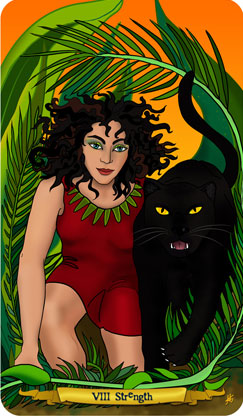 The Nine Lives Tarot is a 78-card reinterpretation of classic tarot imagery from the artist's perspective and personal symbology. The deck connects the nine lives of cats with the tarot's depiction of life's cyclic movement. The direct, colour-saturated illustrations were created with a combination of ink drawing and digital painting. Self-published and available direct from the artist. 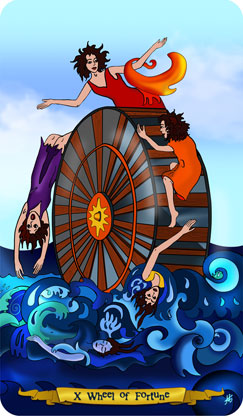 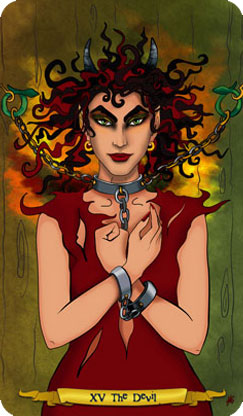 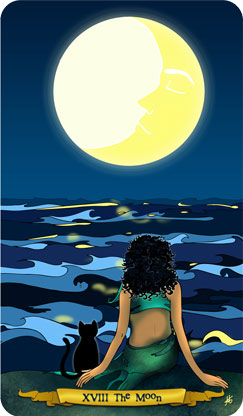 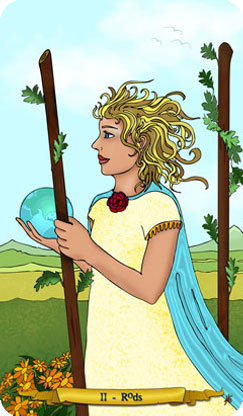 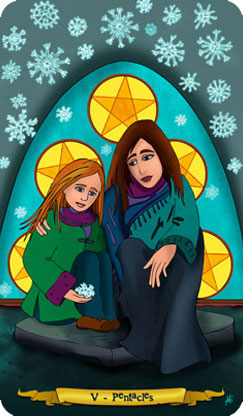 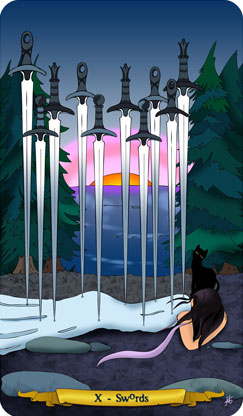 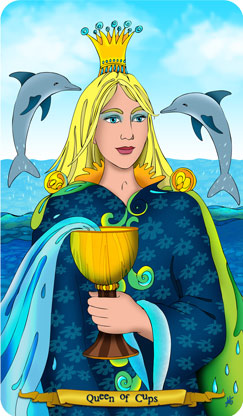 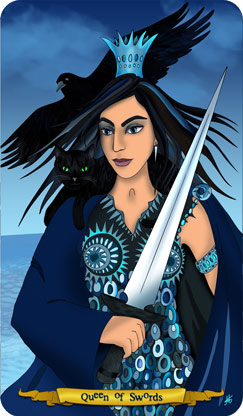 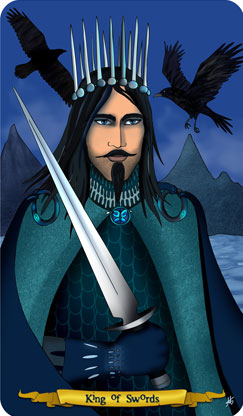 When I first heard about this deck I got the impression that this would be yet another cat deck. Not that I have anything at all against cats but I just had enough cat decks in my collection. I'm really happy I recently took another look since this deck is proving to be a delightful little gem. I have nicknamed this the 'Morgan-Greer of the 21st century' since there is so much in common with that old favourite of mine.

All the people in the cards look cartoony and also very young or ageless which actually makes reading easier. For me tarot cards are symbols of certain archetypes rather than actual people which is why I find this type of courts easier to read than photo shopped images of real people. Unfortunately the Kings have the 'added facial hair syndrome' which was discussed in the Forum earlier in connection with some other decks. It's always a mystery why facial hair is so often added to show that a man is a mature individual, a King. Well, maybe I have to take this as another similarity to the M-G which also has its share of those funny moustache men!

Cups represent the emotional journey we take through life; steeped in water and expressed through heart, soul and emotion. Colour is red, element is water. Realm: The Heart

Swords represent the journey of the mind; soaring through air, while gaining clarity, insight and understanding. Colour is indigo, element is air. Realm: The Mind.

The 24-page LWB (little white booklet) that comes with the deck is not white at all but comes in full colour. There is not very much text of each card and I´m not really a great fan of some of the text. Some of the cards have slightly New Age-y love-and-light kind of text. The Five of Pentacles, for example: 'I'm speaking to you of hope and acceptance.' Luckily the card itself is beautifully melancholy and sad as it should be and not watered down at all.

The artist says she does not use reversals so she has not written reversed meanings for the cards in the LWB. The card backs have a non-reversible purple and blue spiral. It is a very calm and beautiful design which is not too fussy.

This deck has got a lovely eclectic Pagan feel to it. There are lots of women and I have to confess I like the gender balance of this deck because it never ceases to amaze me how many decks still seem to favour men in some way. Either the majority of the characters are male or at least all the important cards are male, or there are men of all age groups but all the women are young/scantily clad/busty. Well, not so in this deck. This doesn't feel like a feminist deck in any way but there are lots of beautiful and powerful women who are also feminine. They are calm and happy and their power somehow seems to glow from the inside which I love. All of the Majors are women except maybe the Hanged Man who could be either. I'm particularly happy about the radiant woman of the Sun card. I grew up in a culture where the Sun is feminine, the life giver and mother of us all, and the Sun is one of the deal makers or breakers for me in any deck.

There are several very interesting minor changes to the usual RWS gallery of characters. The Emperor and the Hierophant are both women - or maybe they are Goddesses -and it seems to work really well. The Fool is a child. She is not the clever trickster child of the Fool in the Ludy Lescot Tarot, and she is neither a messenger nor a clown. She looks very innocent and without a care in the world. It is a different Fool but I think it is going to work well in readings. The 10 of Swords is showing someone who is pinned to the ground by the swords but not really stabbed at all. She could roll away from under the swords if she wanted to. It's the perfect picture for a Drama Queen if I ever saw one and even the cat sitting next to her seems to agree. The cat is tilting her head and watching and wondering.

The Temperance is another interesting one. She is quietly floating away in her meditative state and looks like she has left her usual pouring of water from a jar to the Star. Probably the card I like the least in this deck is the High Priestess who looks too much like a Christian nun. If there is a Christian flavoured card in a deck it is usually the Hierophant (or the Devil) but in this deck it seems to be the High Priestess. Maybe she was not meant to look like a nun and she actually bears no Christian symbols as such but the impression remains nevertheless.

The name of the deck refers to the nine lives of cats but I think - if I have counted right- that there are actually more ravens than cats in it. The cat is black and if it is depicted in the picture it is an unobtrusive part of the whole, rather like in the Halloween Tarot (by Kipling West). The Knights are not on horseback and there is just one horse in this deck (in the Six of Rods). Other animals include snakes, hawks, dolphins, a black panther and lizards. (Sadly no canines.) The two large tails in the Ace of Cups are probably meant to be fishes but I love to think of them as Mermaid tails.

Here is a list of some of the symbolism used in the cards (these are from the artist's webpage):

In addition to these there are keys and torches (candles) in several of the cards. Particularly Justice and Hierophant remind me of Goddess Hekate with her emblems, torches and keys.

I have been spending some time with this deck already and the more I use it the more the cards seem to come to life and reveal their symbology and food for imagination and thought. The pictures are much deeper than one would think at first sight. I think this is something I have felt with the Morgan-Greer over the years. I started studying tarot with it and found it a good deck for a beginner. After a while I put it aside and moved on to other 'more advanced' decks. Now I've come full circle and rediscovered it and I enjoy the beauty and direct simplicity of it. I think Nine Lives Tarot is very much alike. Nine Lives Tarot is a carefully thought out deck and I believe it would be greatly enjoyed by anyone who likes the Morgan-Greer.