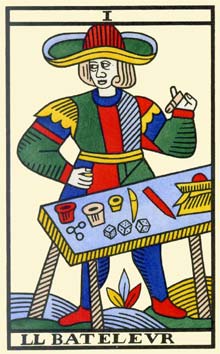 Les Tarots Marseille de Jean Noblet is another reproduction of Marseilles-style cards dating back to 1650. The 22 trump cards have been 'refreshed' by Jean-Claude Flornoy, who also restored the Jean Dodal Tarot. 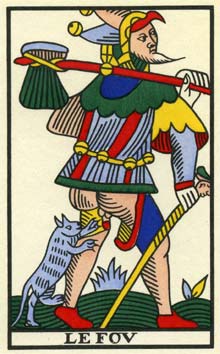 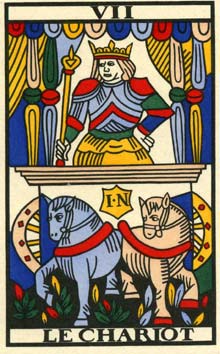 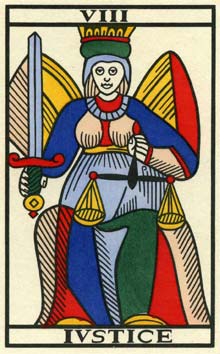 Jean-Claude Flornoy is a noted French Tarot historian and "cartier-enlumineur". He studied the only existing "Jean Noblet Tarot" cards, currently being preserved in the French National Library, as part of his work on early Marseille style decks. This re-edited version of the "Jean Noblet Tarot" majors has been painstakingly hand colored, and is one of the most stunning Marseille style decks that I have ever seen.

The black lines follow those of the original cards, and the coloring is crystal clear and quite intense. The initials of the engraver (Jean Noblet), as was traditional for his time, can be seen on the front of the Chariot.

The cards come in a cream colored, sturdy box, with an illustration of the Sun on the front of the box, and information about the deck on the back. The illustration and text (which is in French) are in a brown/gold color. The accompanying LWB (Little White Book) is in French, but a pamphlet with an English translation accompanies the deck.

The LWB clearly was written by a Tarot historian - in depth information on the background of Tarot, its use (both as a game, and as a tool of divination), and the different Marseille traditions. In his commentary on Noblet, Flornoy talks about the unusually small size of the deck, and the fact that card XIII, usually left unnamed, is here referred to as Death.

Flornoy also notes that Noblet was of a time when traditional knowledge was transmitted from master engraver to his apprentice. This is of importance, as Flornoy makes the case that this deck was a combined effort of Noblet and his apprentice, as certain images, while done in a very exact and conscientious manner, lacked the graphic talent of the master.

In another vein, Flornoy discusses the use of seven symbolic colors, which are partially defined by the ancient traditional phrase still sung by today's Compagnons du Devoir:

"White, the tears of Maitre Jacques Black, the earth which bore him Red, the blood he shed Blue, the blows he suffered Yellow, perseverance Green. hope"

The section on performing a reading begins with the advice not to read for ones self, or for those that one is emotionally connected to. The template for reading that is presented is a five card template, with the first four cards laid out in the shape of a cross, and the fifth card placed in the center, representing the synthesis of the reading. The fifth card is determined by adding up the numbers of the first four cards. (If the number is over 21, it must be added together to reduce the number.)

The cards themselves are approximately 2 1/4" by 3 3/4", of sturdy, high quality card stock, with square edges. I personally like the small size, as I have small hands, and have a hard time handling larger decks. The backs show a repeating black and white pattern, so that it would not be possible to tell if a card had been drawn in the upright or reversed position.

The card faces have a background in a light cream color, with the same black lines that the original cards carry. The card number is on the top of the card in Roman numerals, with the card title, in French, across the bottom. The hands and faces of the figures are in white - which is the only white used. The colors are very rich, very intense, and the imagery is well defined (due to a better printing process than was available when the cards were first printed).

There are several points of interest in the deck: the cat-like figure on Le Fou (the Fool), LL Bateleur's (the Magician's) table only having three legs, the appearance of dice on the table, Cupid being blindfolded in the card of La Moureux (the Lover's), and the drops of color appearing to fall from La Maison Diev (the Tower) resembling the yod-like droplets on La Lune (the Moon) and Le Soleil (the Sun).

Not having read with a Marseille style deck, and not knowing a great deal of the history, I found Flornoy's re-editing of the cards to be masterful, and his commentary insightful. This is a deck that can easily be appreciated, and used, by all levels of Tarot students. I would also highly recommend visiting Flornoy's site, which contains an incredible amount of information on Marseille style decks, including the process he followed in hand coloring this deck.