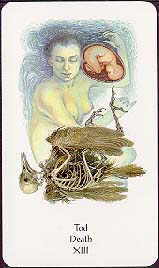 The Tarot of Northern Shadows is one deck that likes to use a lot of whitespace on its cards - the edges of each Norse scene are blurred into the large border. It's nice to see fairly life-like looking humans on the cards too.


Card Images from the Tarot of Northern Shadows 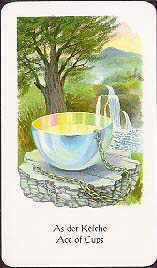 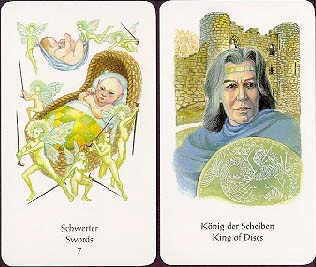 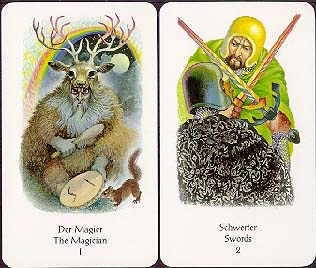 My Tarot of Northern Shadows came yesterday, and because I can’t find much information about this deck I thought I would post on my feelings.

First off it measures 12cm x 7cm, the card stock is good and flexible (if you have the Tarot of the Old Path – it’s the same in size and quality) – The artwork seems to have been done in watercolours, its very good – Sylvia Gainsford has captured expressions on close up faces and even eye colour is evident in some of the cards, bodies, animals etc are all in proportion and I can’t find a badly illustrated card in the deck. There is some nudity (8 cards altogether) male and female in the Majors but none in the Minors.

If you dislike borders and lots of white on your decks then you probably won’t like the Northern Shadows. The images are set in the middle of the card with pure white backgrounds, under the images are the card titles in English and German. The size of image you get is still big enough to be readable and you get the impact of the whole image with nothing to distract you, unless the white backgrounds distract. You wouldn’t be able to trim this deck down without destroying the image on the back of the cards.

I didn’t have the book to go with it but I’ve read through the LWB and it gives basic interpretations to the images. It uses Rods – Fire, Cups – Water, Swords – Air and Discs – Earth. The Tower has been renamed ‘Destruction’ but no other Majors have be renamed.

The Major Arcana feature Norse and Celtic figures, with their attendant animals. Runic symbols are included, as and where appropriate. The Royal cards:- Rods portray Norse gods and goddesses, Cups feature heroes and heroines from the Mabinogion, Swords feature characters from British Celtic and Continental legend and Discs feature Irish Celtic personalities.

The Minors feature images based on Norse and Celtic myths and the Welsh tales of the Mabinogion – Which I know nothing about but have found a couple of websites that tell the stories.

Looking through the deck it is a mix of very old and then slightly modern – The Cups are lovely to look at, very medieval and looks a lot like the Old Path. The Rods are a mix, there are Morris Dancers on the 5 Rods and what look like 2 Captains on the 6 Rods and other cards that again look medieval the Discs are the same, some cards very old looking, others modern. The Swords are like the Cups – but with Welsh pixies/Elves on some of the cards, a Dragon on the Knight of Swords and again very old fashioned. This deck although it mixes old and modern does have a very balanced feel to it, it doesn’t feel odd looking at say a modern cheese maker on one card then an injured knight in full battle armour on another. Animals and trees feature quite heavily too, mainly in the Courts and Majors.

I bought this deck because I love the artwork of the Old Path and I wanted to see just the artwork of just Sylvia Gainsford because I like the cards she did in the Old Path. This deck doesn’t disappoint, I think it will be a challenge because some of the images used are very different to the RWS and looking through it the first time I had to keep referring back to the LWB just to get the connection between the Northern Shadows and the RWS.

I didn’t instantly fall in love with it like I did with the Old Path and I’m glad this didn’t happen because I’ve been able to look at the deck properly and see its flaws. This deck doesn’t have the gentle feminine feel of the Old Path, it’s a more robust down to earth deck. Also I'd only seen a total of around 9 of the cards before I ordered so I'm pleased I didn't make a mistake in ordering it, I am looking forward to getting to know it better and seeing what kind of readings it gives.