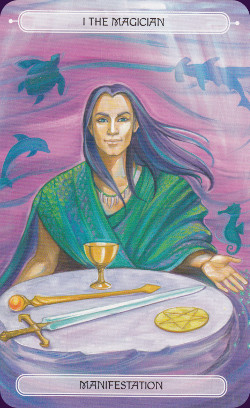 The Oceanic Tarot is an ocean and mermaid themed deck of 78 cards. The major arcana are pretty cards featuring mermaids, while the minor arcana are simple sea-life themed pip cards in suits of Dolphins (Cups), Sea Turtles (Pentacles), Sharks (Swords) and Seahorses (Wands).


Card Images from the Oceanic Tarot 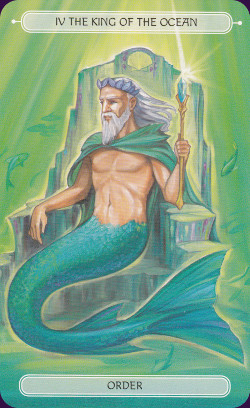 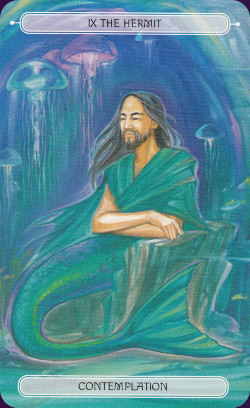 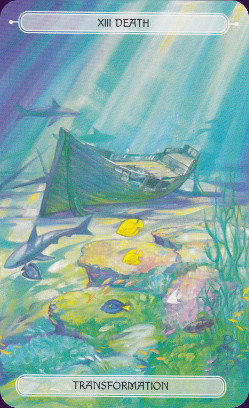 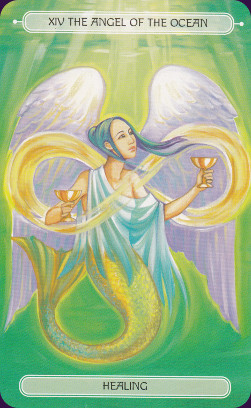 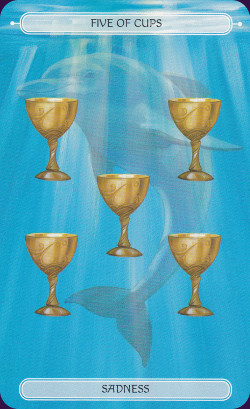 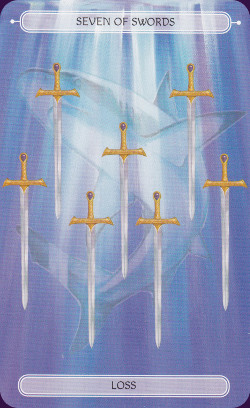 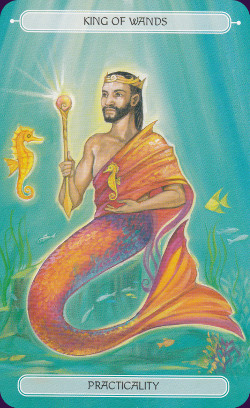 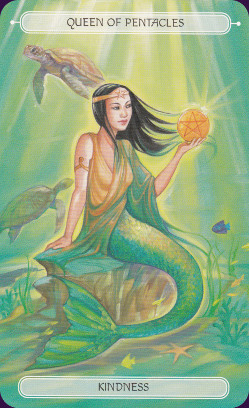 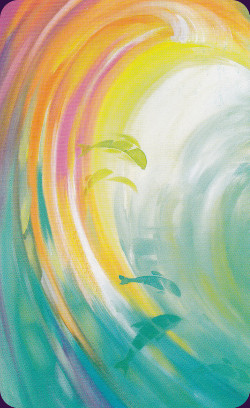 Initially quite attractive but ultimately unsatisfying, the Oceanic Tarot is the deck that could have been amazing, but is instead cliched and unimaginative. The ocean is, for us, not only a source of life, but of myth and mystery. So, with all the potential the ocean contains for a diverse and fascinating tarot, why is this deck focused on mer-people of almost storybook simplicity?

The Minor Arcana has not got much to recommend it. It is clear that one image for each suit has being painted, then cut and pasted ad nauseam over the same monotonous backgrounds. The Court cards are nicely rendered and the Page, Knight, Queen, and King are all accompanied by the symbolic animal of their respective suits. There is such an atmosphere of ennui about the Minor Arcana that it begs the question – did the artist run out of ideas and enthusiasm or could they just not be bothered illustrating the whole deck?

The cards measure 80 x 130 mm, which makes them a fairly standard sized tarot deck. The card stock is excellent. It is light and very flexible, with a smooth and glossy finish. The cards have a nice weight to them and they are very easy to shuffle. The print quality is good – with clean, crisp images and bright, clear colours. The artwork is the weakest point of this tarot. While it is not really bad, it is fairly dull and uninspiring. The images themselves are rather devoid of detail – symbolic or otherwise. Indeed they are so simple as to be almost cartoonish in nature. The mer-people are strangely proportioned with broad shoulders tapering down to impossibly thin lower portions with peculiarly insufficient tails. Having a lack of actual mer-people to compare these images to doesn't help the viewer or artist.

The artist's palette is beautiful – shades of green, blue, aqua, mauve, violet and golden-green dominate the deck in a smooth, swirling strokes. There are no borders, the images reach to the edge of the cards. A narrow white lozenge at the top of the illustration contains the number and title of the card, and another at the bottom has a keyword or concept. The image on the back of the card – a colourful,curving wave with diving fish – is not reversible.

The cards and guidebook come packaged in a solid cardboard box with a pull-off lid. It is made to slide easily into a backpack, and withstand the rigours of travel without sustaining damage. It is printed with images from the Oceanic Tarot, with the deck's title in silver foil. Information about the cards, and publisher’s details are printed on the back.

The 64 page guidebook is written by the deck’s conceptual creator – Jayne Wallace. Printed in gorgeous full-colour on heavy, satiny paper this slim book provides the user with all the necessary information to get started with this deck. The Introduction explains the origins of the deck, as well as giving the Seeker some practical tips for using the tarot. This is followed by some commonsense advice about “How to Begin a Reading".

A collection of 7 layouts is included in the chapter titled “The Oceanic Spreads". This includes a daily draw, a 3-card draw, a 5-card draw, a 7 card layout, 3 card yes or no layout, the Celtic Cross, and 7-card weekly spread. The Major Arcana cards have a page each featuring Keywords, a description/explanation of the illustration, a lengthy exposition on the card’s Meaning, followed by a short piece of Advice.

The Minor Arcana receives considerably less attention – they still get Keywords (always helpful), a shorter divinatory meaning, and a brief piece of Advice. The interpretations are fairly average – nothing revolutionary or progressive – but definitely reliable.

If you are drawn to an ocean themed tarot, love mermaids, or are attracted to the lucid colours of the sea then this deck may be of interest to you. If you are looking for a simple and uncomplicated tarot then the Oceanic Tarot is worth checking out. And if you have an affinity for pip-card tarot decks then you may find this set to be an attractive option.