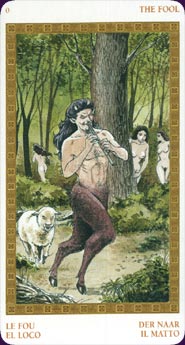 A tarot of the Ancient Greeks. Each card in the Olympus Tarot represents a myth, hero, monster or god from Greek legend, depicted in dramatic comic-book style.


Card Images from the Olympus Tarot 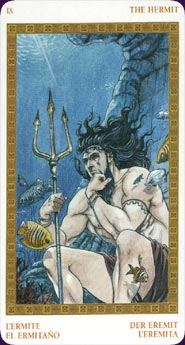 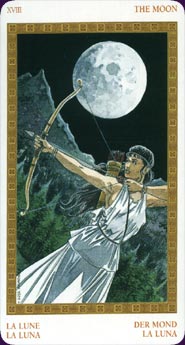 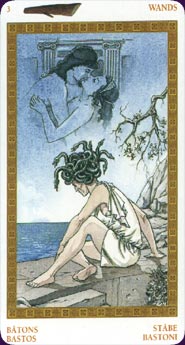 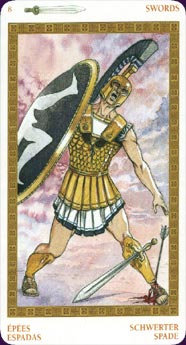 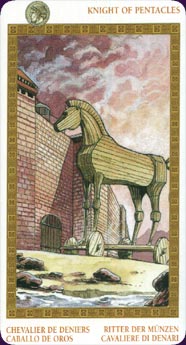 The Olympus Tarot is an epic, dramatic tarot filled with familiar scenes from the myths and legends of the Ancient Greeks. Published by Italian publisher Lo Scarabeo, it joins popular elements from five thousand years of Grecian history with the 78-card tarot framework.

Each of the twenty-two cards of the majors is associated with a one of the many deities of the Ancient Greeks. Some divinities have been linked with an entirely suitable major arcanum - Pan as the Fool, Apollo as the Sun - while the linkage of others seems more of a stretch. Poseidon as the Hermit and Demeter as Temperance seem unusual, but most of all, Hestia as the Tower. The traditional card of destruction or violent change is the goddess of the hearth 'who taught man how to build houses', and XVI has the suggested meanings of useful thought, simplicity, and adequacy. (Different!)

The meanings of the minor arcana have been altered from the norm, and the suits are atypical. Instead of Cups, Pentacles, Wands and Swords, we have instead suits of Places, Objects, Creatures and Heroes. (Though the titles are printed on the cards using the standard suit names.) Ancient Greece is a basis of modern Western thought, so of course the pantheon, myths and heroes are familiar to most. Sparta, Athens, Odysseus, Jason, Midas and Narcissus. Athena's Shield, the Trojan Horse, Apollo's Lyre, Cyclops (the Ace of Wands), Cerberus, the Sphinx, Medusa, Pegasus, the list goes on.

The little white booklet, the standard pamphlet included with Lo Scarabeo decks, is an essential companion to the Olympus Tarot deck. It gives three aspects of meaning for the major arcana, one each for a concept related to the divinity, a behavioural aspect, and the divinity's dominating personality trait. For example, the Lovers card, Eros, has aspects of Enriching thought - Yearning - Ambition. For the Moon, Artemis, the aspects are Pure thought - Honesty - Virginity.

The minor arcana are given a very short description and a single keyword, eg. The Three of Wands/Creatures is Medusa: 'the demon in a petrified landscape… her memories, her guilt, her punishment. Nostalgia. Or Knight [of Pentacles/Objects]: Trojan Horse. The wooden horse in front of the walls of Troy. Betrayal.

Visually, the cards are lifelike coloured line drawings, enclosed by a brown tiled design. The backs of the cards show a reversible battle scene design in relief; white on dark blue. The artist worked on the Tarot of Casanova before beginning the Olympus Tarot, and the artistic style of line drawings is similar. There is some nudity in this deck, both male and female, but it is not out of character for the theme.

This is not the best deck for the beginner, as a working knowledge of Ancient Greek history & myth and a general tarot familiarity are necessary to interpret readings meaningfully. But, while not suited for beginners, the Olympus Tarot is a working tarot deck for the experienced tarot reader.

I have had great pleasure looking at the Olympus Tarot. Golden-brown borders frame each scene in the sunny colors of Greek terracotta vases. The titles delicately notes the number and name of the card (The Fool, Ten of Batons, etc) on top. The bottom titles name the character in French, Spanish, German and Italian. Each scene is illustrated with smooth pen and watercolor washes of an excellent graphic novel or an expensive magazine. The backs are deep blue with a white etched illustration that is on the top and reversed on the bottom. Fourteen pages of the LWB are blue print on white.

The assignment of the majors are creative. Other decks with Greco-Roman themes have books. (Pythagorean Tarot by John Ops: A Renaissance Tarot by Brian Williams; Mythic Tarot by Juliet Sharman Burke and Liz Green and the Tarot Mitilogical by Amerigo Folchi.) Olympus does not.

The major assignments of the Olympus tarot is as follows:

You do need the LWB to explain the majors. The LWB has names, a brief paragraph and suggested keywords. Zeus for the magician is described well, but other assignments need fleshing out for someone like myself. Riccardo of Lo Scarabeo said the books by Robert Graves was the resource for this tarot.

This tarot is ideal for starting research and creative thought, and as a comparative tarot for any of the other above Greco-Roman decks. You may also find that your favorite tarot also includes some Greco-Roman themes.

The minors are also very different in assignment, similar to the Avalon Tarot. Chalices or Cups are places, suggestive of spirit and soul, the aspect of water. Pentacles are objects, possessions, earth. Wands are Creatures, instinct, animalistic aspects, passions and strengths and fire. Swords are Heroes, with logic, intelligence, human mind, air.

For collectors of mythic themes, here's a lovely deck to add in your collection of Greco-Roman themes. For those who are beginners or Rider-Waite-Smith fans of tarot, I would recommend reading reviews. Lo Scarabeo offers the Universal Tarot by R. DeAngelis and Tarots of the Renaissance (Rebirth) by Giorgio Trevisan that has a beautiful European feel and scenic majors and minors that work with RWS assignments. If you are into learning about Greco-Roman themes, my suggestions in the third paragraph also might assist your desire and enjoyments. Happy readings.