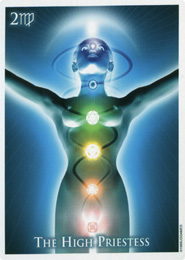 The design is ultra-modern and computer-generated in the One World Tarot deck. It focuses on the astrological aspects of tarot, but also touches on numerology, color theory and other esoteric symbolism.


Card Images from the One World Tarot 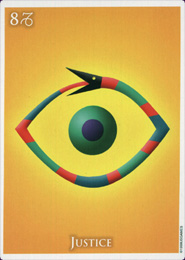 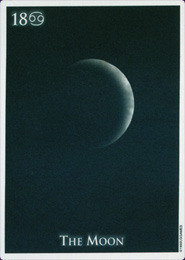 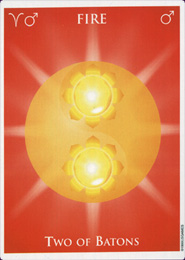 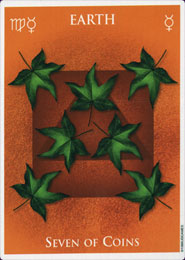 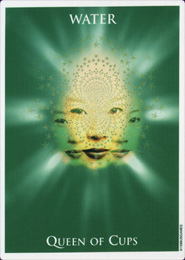 What initially attracted me to this deck was the cover picture for the deck/book set - a Stonehenge-like graphic that gives a feeling of ancient mysteries. I was also intrigued by the promo for this deck - that Love was using the connection between Astrology, Tarot and the New Age to, in essence, bring the Tarot forward in time. I think that it promotes personal growth to step outside of our own safe places and experience other people's perceptions.

I think that Crystal Love put a great deal of herself into this deck and the accompanying book. She has a love for the Tarot, for Astrology and for oracular work in general. I believe that she also shows a respect for the tone of the work being done - the archetypal energies being accessed, the levels of understanding involved and the personal spiritual growth that can be achieved. However, IMHO, this deck, built upon astrological and numerological esoterica, missed by a mile.

From the book, in discussing the origins of the Tarot:

"No one, however, seems any wiser as to the actual origins of the tarot. For my part, I intuitively believe that the tarot originated in Atlantis, where it was a means of preserving vital and intricate astrological information that would have been lost when tidal waves of the last Ice Age finally buried this primal civilization under the sea." *

From the book, in the introduction:

"At some unrecorded moment in history, the basic astrological energies which are said to orchestrate life on earth, the planets, the signs and the three sub-divisions of each individual sign, were symbolized in pictorial form, and the tarot cards that we know today were first born." **

There are some well done sections - charts relating astrological connotations to each Tarot card, a short synopsis of the metaphysical meanings for the numbers, and a short section on how to interpret the cards in the individual astrological houses.

The cards themselves are a nice size for handling in a reading - 3 " by 4 1/4 ". They are of high quality, glossy card stock. The backs of the cards are quite interesting - a blue background with white line drawings in a mandalla type effect, with black, lotus-like line drawings superimposed over it.

The Major Arcana are presented with a 1/4 " white border surrounding each card. At the top of the card is the astrological symbol, at the bottom of the card is the title. The symbolism is very non-traditional, and in many cases does not bring out, for me at least, the inherent energy traditional for the card.

Cards that missed by a mile, for me, anyway, were the Magician, which is shown as a red/green yin/yang symbol; the Empress, which is shown as a pyramid with two palm trees behind it and a full sun above it and the Lovers, shown as two coiled snakes that you really have to look at to identify. For some reason, unknown to me, Strength and the Hanging Man are the same graphic, which is simply inverted on ne card.

Several of the cards have been renamed. The Hierophant is The High Priest, the Hanged Man is the Hanging Man, Death becomes The Rebirth and the Devil becomes Deliverance.

The symbols in themselves are annoying - I don't really connect a yellow flower to the power of the fiery Batons; it is a definite stretch to connect a starfish to the Cups; gentle puffy clouds representing the penetrating, cutting energy of the Swords lost me in the transition. The green leaf for Coins made sense - but became very repetitious.

The court cards do not get any better. They are simply faces in the middle of a card. The elemental attribute is at the top of the card, but no astrological attribution, with the title and suit on the bottom of the card.

It would be very hard to read with this deck unless you already knew the Tarot well. It is not a deck for beginners. For someone who has studied the Tarot and understands its basic symbolism, and can get past the repetition in the cards, this could be an interesting deck to read with. I advise seeing the cards "in person" before making the choice to purchase them.


Complete Details of One World Tarot


Similar Decks to One World Tarot