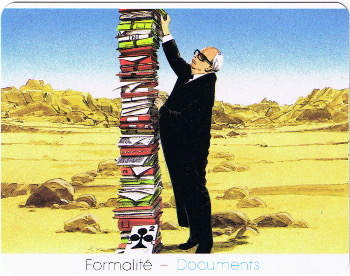 The Oracle Dessuart is a French 52-card oracle based on playing cards. The artwork has modern scenes - from yachts to cities to American football - and divinatory keywords in French and English on each card.


Card Images from the Oracle Dessuart 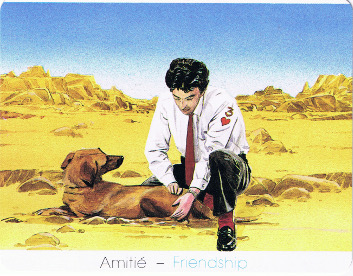 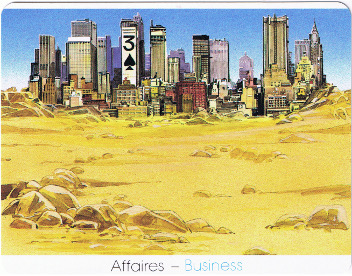 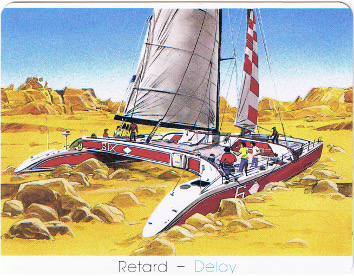 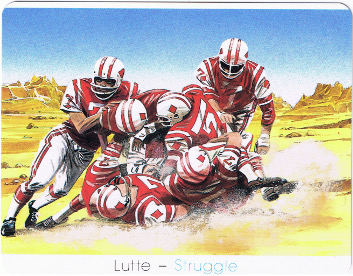 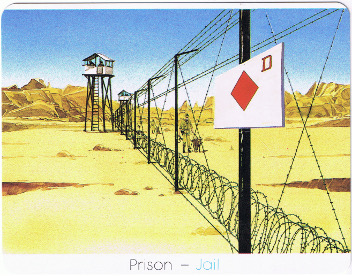 The modern imagery, 80's clothing and strange format of this deck might throw people off, but I want to discuss why I really enjoy using these cards.

The first thing you might notice is the desert landscape on the backs of the cards which is also the backdrop for every card in the deck (with minor changes.) Another strange feature is the landscape-style or length-wise cards. Most decks are portrait-style with upright images. And then of course there are the subjects of the cards; mostly of people, vehicles, and buildings, with some exceptions including an insect, a flower, a road block, a volcano, and other random things. Certainly the images are meant to portray a story more than wow you with beautiful design, though the pictures are brightly colored and well-drawn.

Everything about this deck confused me--at best I found it novel--until I read the small accompanying booklet. It explained the cards are meant to be read side-to-side and play out like a movie. Now the repeating backdrop (is life not but a stage?) the characters, and the landscape format all suddenly make sense! The desert is the setting and the foreground images are all the things that happen in that setting. The surreal effect comes when you realize none of these things seem at home in a desert, just as our lives and dramas unfold in the foreground of deep mysteries and infinite darkness. (Too deep for this deck? Maybe.) Ok, basically, if you want your readings to play out like a very bizarre indie 80's movie, go for this deck. Like any oracle or gypsy-style deck, the images are succinct, pack a visual punch and get straight to the point. I find it very readable and have had great results, both introspective and predictive.

The booklet is in German, French, and English, and it gives some explanation of the deck and tips on reading tarot. It provides a quick set of keywords for each card, and three layouts: a short layout called "The Question," and two longer ones called "The Year" and "The Tree of Life."

It is a 52-card poker-style deck with traditional numbering, symbols, and courts. The numbers and symbols are clearly seen on each card (often melded with the image). I should note that the abbreviations for Jack, Queen, and King, are V, D, and R, respectively. They are of sturdy card stock and measure 11 x 8.5 cm.

Enjoy your weird, wild journey with this unique set.