Oracle of the Mermaids 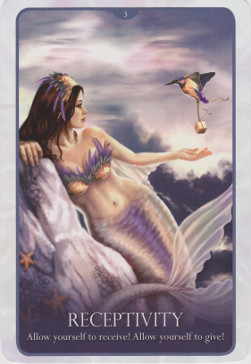 The Oracle of the Mermaids is a very feminine deck from Lucy Cavendish, that draws on mermaid myths and legends. It has 45 cards with soft, fluid fantasy images of mermaids, each accompanied by a keyword and short divinatory phrase.


Card Images from the Oracle of the Mermaids 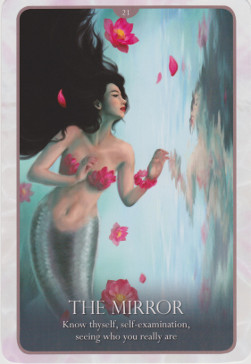 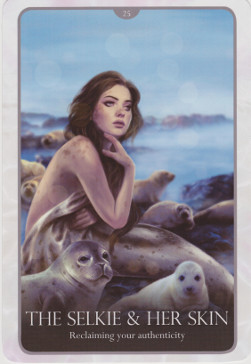 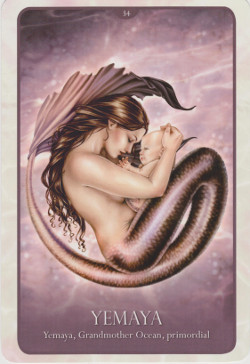 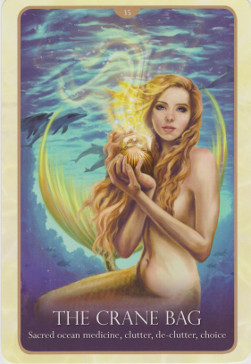 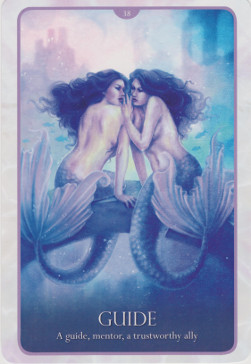 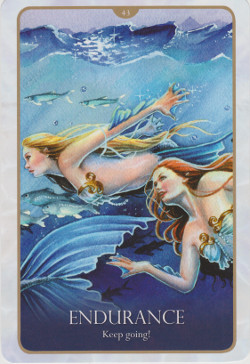 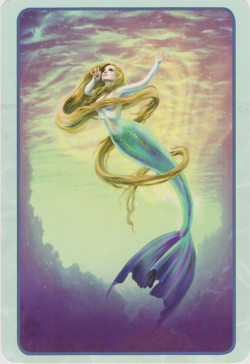 Oracle of the Mermaids Review by Nathalie Wigmore

The Oracle of the Mermaids is a 45-card oracle deck created by Selina Fenech, the artist behind the Wild Wisdom of the Faery Oracle, in partnership with author Lucy Cavendish. Released by Australia-based Blue Angel Publishing in April 2013, this deck and guidebook box set invites the reader to explore divination through the enchanting underwater world of those mysterious and alluring creatures of the deep known as mermaids.

The cards come in a sturdy box, measure 3 5/8 x 5 ˝ inches and are printed on glossy card stock. The card back design, which is non-reversible, is bordered in light-blue and features a blond-haired mermaid floating against a background that feels like a blended combination of ocean bottom, sky and clouds. The borders around the card faces are non-white, each featuring a colour that complements the image. Overall tones are muted, with soft blues, greens and yellows giving the deck a moody, atmospheric feel.

Each card is numbered at top-center, 1 through 45, just under the borderline, against a background colour that blends nicely with the image. Near the bottom is a keyword or short title in white uppercase, as well as a few meanings and/or brief messages underneath in smaller lowercase, also white. Whereas in some oracle decks, the size and colouring of the font can be a real distraction, in this particular deck it doesn’t take away from the primary intuitive response trigger, which is the visual element.

The guidebook measures 4 ˝ x 6 Ľ inches and is 168 pages long. The first part contains information about the origins and magical significance of mermaids as well as four spreads, including a past-present-future spread and a slight variation on the well-known Celtic-Cross spread. The second part is the longer of the two and contains suggested meanings, messages and interpretations for each card, along with a small black-and-white thumbnail image. Each card has roughly two pages devoted to it. Divinatory information is divided into three sections: “The Mermaids Sing,” which presents a positive perspective on the theme of the card told from the mermaids’ point of view; “Reversed,” which presents the darker or blocked side of the card, again as told by the mermaids; and “Divination,” which provides a direct message or suggested path of action.

Most of the artwork in the Oracle of the Mermaids is eye catching and intuitively suits the intended meaning of the card. A few outstanding examples include “Adrift,” which depicts a red-tailed mermaid being carried along by the waves at the surface of the ocean (“letting go, allowing a higher force to take charge for a time”); “Honour the Masculine,” which shows a handsome young merman with arms stretched wide open in an expansive gesture full of power, strength and energy (“respecting men, embracing the masculine divine”); “Coral’s Wisdom,” which shows a mermaid’s naked back covered with an intricate tattoo shaped like sea coral (“colony, delicacy, fragility, works that are created over great periods of time”); and “The Mirror,” with a dark-haired mermaid floating before a mirror of rippling water and gazing at her distorted reflection (“know thyself, self-examination, seeing who you really are”). On the other hand, there are a handful of cards whose meanings do not readily connect to the image. Examples of such cards include “Sacrifice,” which depicts a Goth-type mermaid simply gazing at the reader and whose message on the card reads, “There are those worth making, there are those that will destroy you.” There is nothing obvious in the image that connects it to its intended divinatory concept. The same observation applies to the card titled “The Crane Bag,” which depicts a mermaid holding up a type of shell-shaped treasure. The card message reads “Sacred ocean medicine, clutter, de-clutter, choice.” One can see the connection between the treasure in her hands and the idea of sacred ocean medicine, but somehow the image fails to convey the idea of getting rid of clutter and making choices. And finally the card entitled “Guide” is outright confusing, as the message reads “a guide, mentor, a trustworthy ally,” but the image presents two mermaids huddled close together with one appearing to be whispering something in the other’s ear. The impression conveyed by the image is more one of gossiping and telling secrets than one of “guide.”

The type of art medium also doesn’t appear to run consistently throughout the entire deck. The vast majority of images appear to be computer graphic artworks, with the medium’s smooth, seamless signature look made evident. But a couple of cards give the impression of being done in acrylic or watercolour that was subsequently scanned to computer. This is especially evident in the card “Endurance,” which has a very obvious grainy look to it and looks like a cross between a watercolour, acrylic and colour pencil image. There is nothing inherently wrong with this mixed media approach; it is obvious Ms. Fenech is a talented visual artist. However, readers who favour a uniform look and feel to their decks may find this one a bit off-putting in this particular respect.

Finally, author Lucy Cavendish tends to come off a wee bit preachy with regards to eco and animal ethics in bits and pieces of her guidebook. She also makes frequent references to moon blood and moon cycles and connecting with the womb. While there is nothing inherently wrong with this, and while there is a connection between the moon and the tides of the oceans where mermaids live, not every oracle reader comes from the same spiritual background as Ms. Cavendish and thus may not be as keen or interested in reading the entire book. The card stock is rather on the thin side and has a very slight arc that causes the cards not to lay completely flat. It is, however, covered with a glossy laminate that gives the cards a nice sheen and offers them a measure of protection from dust and dirt. The quality of construction of the box is absolutely outstanding. The cardboard is very thick and extremely rigid, making it virtually impervious to everyday wear and tear. This is the kind of box one actually wants to keep. Blue Angel Publishing is to be highly commended for the care and attention it brings to the manufacture of their oracle deck boxes. Other publishing houses certainly could learn a few lessons from them. Overall, the Oracle of the Mermaids is a solid, good-quality, enjoyable oracle deck with beautiful artwork that, a few exceptions notwithstanding, generally lends itself well to intuitive reading. It is a very feminine deck, one that will appeal to readers who share an affinity with mermaids or who love water in all its aspects, be it the ocean, a lake, or a simple relaxing bath. It feels primarily geared for relationship readings, although a few people have reported success using this deck for other matters. “Light, soft and fluid” are the qualities that neatly sum up what the Oracle of the Mermaids is all about.


Complete Details of Oracle of the Mermaids


Similar Decks to Oracle of the Mermaids

Home > Decks > Oracle of the Mermaids