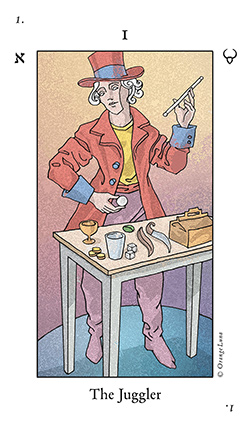 The Orange Luna Tarot is the second deck from Nil Orange and Alejandro C. Luna, who created the Visual Zodiac. This skilfully-coloured 78-card tarot takes inspiration from the Tarot de Marseille in the major arcana and court cards, while the suit cards has new illustrations. 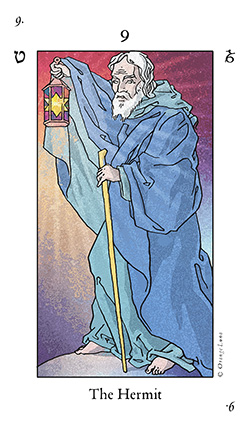 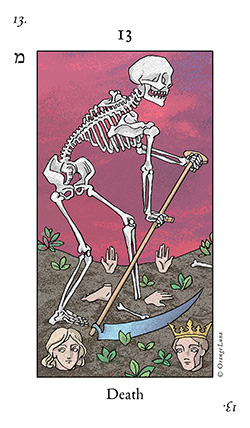 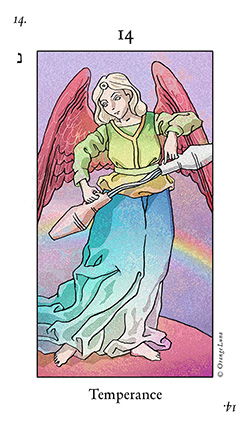 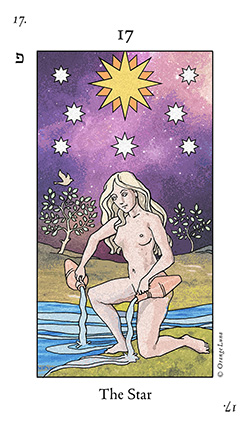 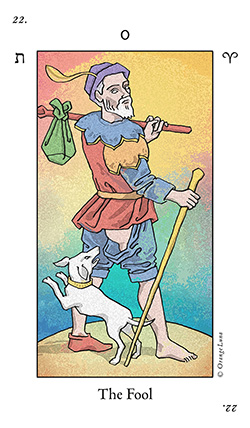 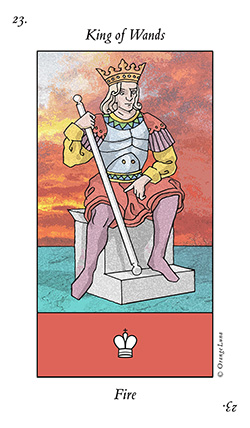 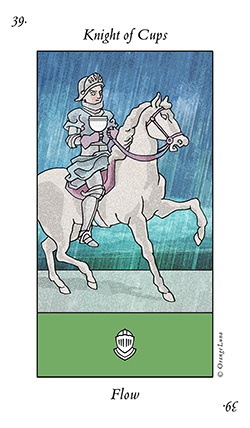 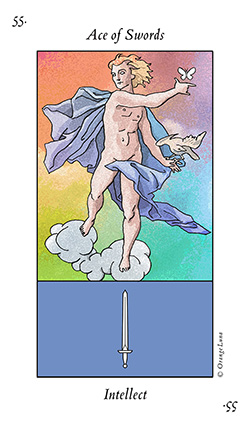 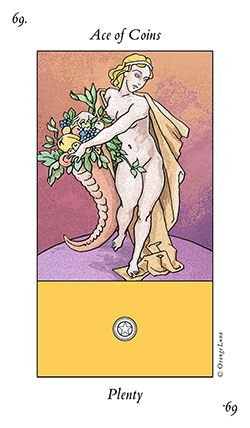 Nil Orange and Alejandro C. Luna, creators of the Visual Zodiac have turned their attention to tarot cards. Their beautiful deck the Orange Luna Tarot (OLT) has finally been published (largely through crowdfunding) and it certainly has been worth the wait. Inspired in part by the Tarot de Marseille (a collection of decks similar in design and manufactured in the French city of Marseille) the Orange Luna Tarot smooths out the rustic design of the Tarot de Marseille (TdM) and adds much gorgeous colour to the deck.

The Major Arcana visually references the Tarot de Marseille, however it is far more nuanced and subtle than the original. Of course the Marseille deck famously has a pip card Minor Arcana whereas the Orange Luna Tarot has a fully illustrated Minor Arcana. This is a wholly original creation of the artists, and ably reflects commonly accepted divinatory meanings. The titles too reflect the heritage of this deck, with The Fool listed by his alternate name The Juggler, The High Priestess is The Popess, and The Hierophant is The Pope. All other cards bear their familiar titles, and the ordering of the cards follows the Marseille/RWS standard.

This is a regular 78 card tarot. It measures 70 x 120 mm which makes it a fairly average sized deck. It fits very comfortably into one's hands and is easy to handle and shuffle. This is facilitated by the high quality of the card stock which is light and resilient, quite flexible, with a very smooth, low gloss finish. However, in the black and white deck this finish may preclude some media from being used (such as pencils and paints) to colour the cards.

The print quality is outstanding with the finely balanced colour compositions and unusual texture of the images being beautifully reproduced. The artist's palette is quite restrained and sophisticated, eschewing loud and bright colours. The tints of dusk and dawn dominate much of the deck – dusty salmon, lavender, smoky blue, soft yellow, and powdery aquas, greens, apricots, and slate.

The artwork is deceptively simple and the fragile line work which abjures chiaroscuro allows the skilful colour schemes to glow. The black-and-white deck reveals the economy of line, while the coloured deck images reveal curious textures most commonly found in silkscreen prints. In some cards such as The Pope and many of the Court cards shadowy architectural features resolve into focus in the background. In other cards such as The Emperor and The Lovers tiny details may be found decorating clothing or the landscape.

The characters in the cards have blank eyes and oft times expressionless faces, save for an occasional frown or grimace. However these blank looks do not detract from the strength of the images. Rather they allow the Seeker to project onto or interpret the pictures according to their own intuition. All the cards have a broad white border. They are numbered 1 to 78 with the number placed in the top left corner - both upright and reversed. The card’s title is given above the illustration. In the Minor Arcana, below the main illustration is a pictographic representation of the title in a colour-coded box, Cups – green, Swords – blue, Coins – yellow, Wands – red. The print on the back - a complex of curving and straight lines, and dots shaped into opposing triangles – is fully reversible.

The Little White Book/Guidebook has not been published at the time of this review, however fans and enthusiasts rest assured that one will be published.

The Orange Luna Tarot is a tasteful and stylish reinvention of the Tarot de Marseille. It is suitable for students of the tarot both new and advanced. In addition to its sound and reliable symbolism and imagery, the details are fascinating and captivating. A beautiful deck for collectors and Seekers. Highly recommended.

A few months back I have noticed this deck on Facebook. It was still in the making and it looked really interesting, so I was following its page. Some weeks later, here we are: the Orange Luna Tarot (below OLT for short) is ready, and the creators are now doing the last touches. So let'’s see what this deck offers us.

The artwork is done by Nil Orange, and the book is being written by Alejandro C. Luna. They have worked together before on the Visual Zodiac. The deck has 78 Cards following the traditional Marseille order: Justice is VII, Strength is XI.

The cardstock is a little on the thin side, but has the feel of paper, which I am really grateful for (too many plastic decks nowadays). The cards are the standard tarot size, and they are easy to shuffle, although I was a little afraid that I will bend them while at it. Maybe because I have big hands and I like my cards sturdy, so it might not mean a problem for someone whose hands aren’'t like shovels.

The deck is available in multiple languages: for now in English, Spanish, German, Thai and Hungarian (the latter translated by yours truly). Customised decks can be ordered from the creator’s' website.

Nil Orange’'s unique and unmistakable style makes this deck so special. The images look like a mixture of manual and digital techniques, and have soft colours that are very pleasant to look at. Is it possible to be soft and bright at the same time? I think Nil has nailed it.

The Major Arcana illustrations mostly follow the Marseille tarot traditions. Amongst the few exceptions is Strength which was based on the Papus Tarot, and the Juggler (Magician) based on the Xul Solar Tarot. On their Facebook page Nil and Alejandro explain how the images have been influenced by various decks. It is nice to see how the OLT has evolved and gives homage to its muses!

The look of the cards is obviously based on the Grand Eteilla Tarot. They have huge borders, and on the Minors there is the division seen in Eteilla’s deck. The Majors have their names and numbers, the Hebrew letters and zodiac signs associated with them printed on their borders. The Minors have their names, numbers and a keyword printed on them – a feature not everyone likes but which makes a beginner’s life so much easier. Sometimes these differ from the traditional meanings - I will come back to this later.

The Minors are a mixture of Rider-Waite-Smith style decks and the Grand Eteilla: there are illustrations for the cards’ meanings and in a separate field the tokens of their suits. It is a curious thing that the tokens are not built into the illustrations, e.g. there are absolutely no cups present on the picture of the Four of Cups; only in the aforementioned separate field do we have them. At first I was surprised but now I find it rather refreshing and it must be liberating for the artist, not having to incorporate them in the story he paints. It might make it a bit difficult to read them at first though. Just as an example the 7 of Wands has two men with sword in their hand, making one assume it is the 2 of Swords. It might take a second or two to figure out what exactly is going on in the card, but the novelty makes up for it.

Ease of Use Earlier I have mentioned that the meanings don’t always follow the usual ones. A quick example is the 2 of Swords which is subtitled as ‘Equilibrium, and has a ropedancer walking on her rope. Equilibrium, or balance in the Minor Arcana is most commonly paired with the 2 of Pentacles, but I am sure the coming companion book will explain why the creators chose this keyword. In case you wondered, the 2 of Pentacles became ‘Exchange’.

Again, because of the tokens are not present on the illustrations, at first it can be a little confusing to read with this deck. But, once you have gone through the cards and understood how the pictures work you are good to go. The artwork is quite easy to understand and familiarize with.

On the matter of symbolism: the Majors are untouched and traditional, and the Minors are a great source of new ways of looking at the particular cards.

Personal Opinion Oh the feel of freshly cut cards! As I mentioned before I love Nil Orange'’s art, and in this deck I particularly love the eyes of the figures. They have empty white eyes that could be looking anywhere: they could even be looking at you! The other thing that I have noticed only at second glance was the backgrounds. Nil has used photos of places and photoshopped them into his drawings to give them dimension. I think it works well with his style, and leaves one wonder where all those photos were taken.

All in all I am happy I have found this deck. It is lovely to read with and I think we will be good friends!