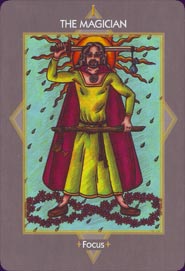 The Otherworld Tarot has been brought to life by fairy artist, Sarah Nowell. The major arcana cards are simplified, but bright and attractive. The minors diverge from the Rider-Waite scenes, relying more on the suit emblems and one or two objects to convey the tarot meaning.


Card Images from the Otherworld Tarot 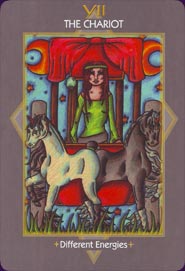 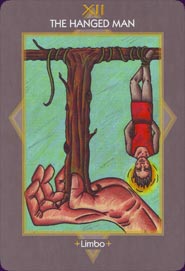 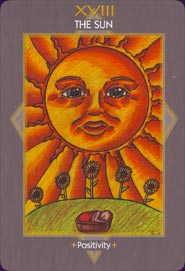 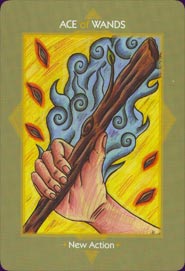 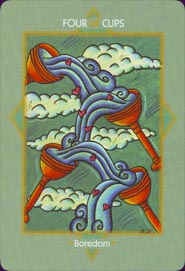 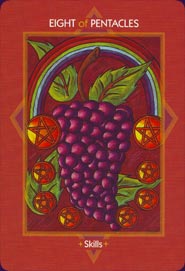 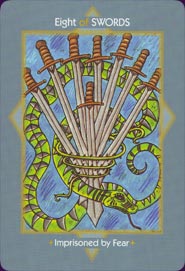 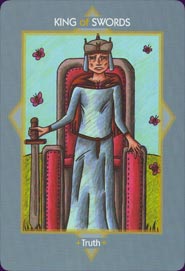 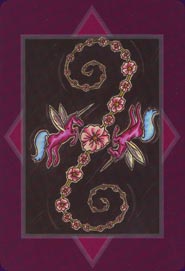 The “Otherworld Tarot” is the product of Alison Williams wish to create a deck of her own, and Sarah Howell’s lovely, color intense fantasy based artwork. It is a traditionally structured, 78 card deck, using traditional titles for the Major Arcana, with Justice at VIII and Strength at XI. The suit titles are Wands, Cups, Swords, and Pentacles. The Court card titles are King, Queen, Knight, and Page.

The deck and companion book (a hard-cover version of a Little White Book – LWB) come in a hard cardboard box, with a lift off top. The 96 page LWB includes a short introduction to the Tarot, working with card definitions and your intuition, setting the atmosphere for a reading, and allowing the story to tell itself.

The cards themselves are good quality, heavy card stock, measuring 3 ˝” by 5”. The backs have a wide lavender border, with a lighter, Ľ” inner border. The image shows two winged horses on either side of a beautiful curved graphic. The backs are reversible.

The card faces show a wide (1/2”) color coded border, with a small “V” shape in the center of the top, bottom and sides. The Major Arcana border color is gray, with Wands a Light Green, Cups a Sea Green, Swords a light Blue, and Pentacles a Brownish-Red. I found both the wide borders and the “V” shapes to be distracting when reading.

The artwork is whimsical/artsy, with a sprinkling of fairies, elves and other fantasy figures. The colors are intense, and minimalist. The figures are gaunt to the point of looking anorexic, with long limbs.

The imagery in some of the cards (such as the Tower, the Empress, the Emperor, and the Lovers) is fairly traditional, although done in a fantasy format. Other imagery is quite different – Judgment shows an Archangel standing on top of a coffin, blowing her trumpet. The World shows a globe being held between two hands, while the Page of Cups and the Queen of Cups are depicted as mermaid. The Knight of Cups is show riding a sea creature. The theme of snakes runs through several of the cards, including Strength (wound around her waist), the Four of Swords, and the Eight of Swords. The Minor Arcana is done in a semi-Marseilles style, with the use of icons and minimal imagery.

The Two of Swords is quite an interesting card, showing two eyes (in a blue face) behind two crossed swords. The Magician stands with one foot in the middle of each side of the lemnescate, with a wand held in his left hand, across the front of his body, and a sword in his right hand, behind his head. The Fool is sitting in front of a lit candle, his head braced on one hand, and one finger of his right hand reaching out to touch the flame. Death shows a female figure in black, standing in front of a white horse with a scythe in her right hand and the horse’s reins in her left hand. The Tower shows the electric bolt in the sky, and fire on either side, but no bodies falling from the structure. Justice stand upright, with her arms out at shoulder height, a scale in either hand. A sword is above and behind her head. The Chariot shows something that I have seen before, which is the two horses (unicorns in this case) facing in different directions.

The strengths of this deck are its delightful use of intense color, and ability to move the archetypes beyond their traditional formatting. It would work well to help a reader that wants to open up their readings, and would be attractive to someone that likes this type of artwork. It would not work well as a beginner’s deck – i.e., as a deck to learn from.

The Otherworld Tarot is a bright and cheerful deck from Schiffer Publishing. Recalling the innocent days of childhood, and the positive expectation that the world really is a good place, this charming deck is full of first-class fresh vibes. Although it claims that it is illustrated with ‘fairies, elves, magicians and other fairy folk’ there is nothing in this deck to suggest, visually, that the people in the card illustrations are fairies. However, not having seen fairies lately, I cannot definitively claim that these aren't fairies, either. Just don't expect wings, Pixie dust, and magic wands. The images, for the most part, reference the Rider Waite Smith tarot in a broad sense, especially the Major Arcana and Court cards. The Minor Arcana are so simplified and shorn of human interactions they border on being pip cards.

This is a fully illustrated 78 card tarot, with 22 Major Arcana, 56 Minor Arcana – with no renamed cards; the suits (Cups, Swords, Wands, Pentacles) and Court cards (King, Queen, Knight, Page) are standard. The cards measure 90 x 125 mm – a little broader than many *standard*tarot decks, but still relatively easy to handle. The card stock is excellent quality, quite heavy, and not very flexible. The cards are smooth, with a high gloss finish; they are slippery and shuffle very easily. The print quality is excellent, with vivid colours, and clean, clear lines.

The artist, Sarah Nowell, uses a vibrant palette of brilliant colours, and a style reminiscent of children's book illustrations. It's a little sweet, a little hippyish, a little naive (in the best sense), largely uncomplicated and unthreatening.The artist's technique of fine shading does not always translate well into smaller images, and some of the pictures look misprinted or blurred. They aren't.

The cards have broad colour-coded borders – Majors are grey, Cups – Aqua, Pentacles – russet, Swords – blue, Wands – green. The card numbers are given at the top in yellow; above the card title - which is printed in stark white. Beneath each image is a keyword or short description i.e. The Fool – Leap of Faith; 9 of Pentacles – On the Right Track; 7 of Swords – Underhandedness; Queen of Swords – Patience and Strength, and so forth. The design of the back a double spiral of flowers and two unicorns is fully reversible.

The cards come in a little solid cardboard box with a lift-off lid. The box is glossy burgundy and printed on all sides with both information about, and images from the Otherworld Tarot. The guidebook sits on top of the cards. This is a compact little set that will slip into a bag or backpack with ease, and survive the rigours of frequent handling.

The 96 page guidebook by Alison Williams has been written specifically to complement the Otherworld Tarot. The Introduction is simple – a few lines about the origins of the tarot; a word of caution about common prejudices against tarot; and a brief outline of how tarot can help the Seeker gain clarity and insight into life issues. There is a chapter on ‘Reading The Tarot’ which is predicated on the assumption that these cards will be used in reading for others. Given the fundamental nature of the deck and the inclination towards novices, this is a little unusual. A 3-Card spread, and The Celtic Cross are the only layouts included in the guidebook.

Each card has its own page. There is very little in the way of description of the cards, given the limited space available the information is primarily concerned with the divinatory meanings. There are no reversals, and the upright instructions are fairly sane and sensible versions of commonly accepted meanings.

While I would always recommend that a learner start with a foundation tarot deck such as the Rider Waite Smith or even the Thoth deck, I understand that a student may want a back-up deck that isn't so demanding. The Otherworld Tarot is a great alternative starter/learner deck. It is good for a novice, good for children and teens… With its bright colours, simplified images, colour coding, and keywords is a lovely deck, with great appeal for a broad spectrum of tarot users.