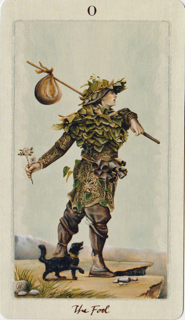 The Pagan Otherworlds Tarot is a high quality deck in every aspect, from artwork to the printing quality. It has 84 cards - it includes one extra major arcana and five unique 'Luna' cards - with spare but powerful illustrations with the feel of Renaissance art. 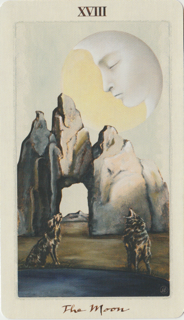 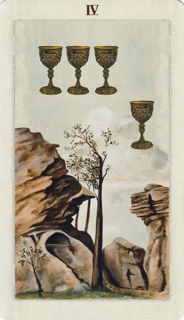 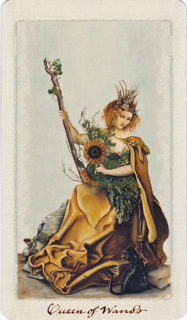 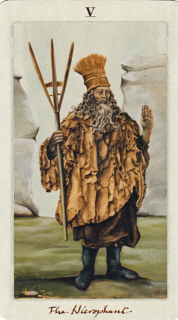 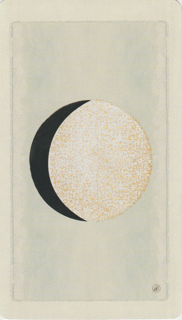 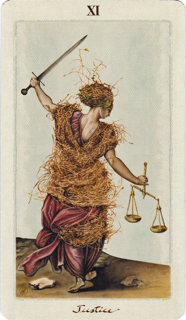 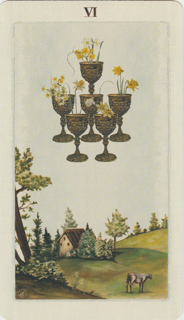 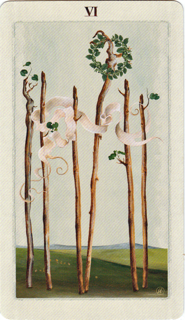 The first thing one will notice about the Pagan Otherworlds Tarot deck is that from the moment it is unwrapped, it becomes a very tactile experience. The box alone is worth several minutes of attention. There is a feeling of age to the box. Like it’’s one that would have been tucked away among some trinkets in an attic. The slight embossing of the gold is endless entertaining to just run your fingers over. The striking blue and gold is only broken by the red seal at the top of the box denoting it as the first edition of a deck sure to extend into many further editions. (Savvy collectors might do well with opening the box from the opposite end.) Whichever end you decide to open, please stop and take note of the subtle green tone to the inside of the box. Details, details, details.

The deck itself runs about a 1/4 inch taller and a hair’s breadth wider than a standard Rider-Waite-Smith deck and fills out at about a 1/4 thicker than the aforementioned tarot. That being said, the card stock is sumptuous. Revealing only a hint of gloss in what the local paint supply store might refer to as ‘eggshell’. The linen finish is just another in the many examples of the textile nature of the deck. It adds an almost lush, art canvas feel to the individual cards.

And then the art of the deck is another thing all to itself. It’'s rare to get a deck of original art done in a more classical style of painting, rather then the mostly comic book or Ren-Faire stock we get today. It'’s almost shocking to see well loved figures portrayed in such a quiet and austere way. Presented here, the borders on the cards resemble that of the borders of the painter’s canvas, only enhanced by the detail given to it’s tactile finish as mentioned above.

The use of rainbow holographic gold on the lunar cards is just enough. The broken pattern of golden flecks shimmer softly in candle light. Enough to add just a whisper of magic to the readings when they appear.

The shuffle is good, real good. The cards have a core to them that you can tell is going to stand up a great deal of wear before giving into the effects of time. Then the spread shows the meat of the deck. The art.

The characters in the art have a quiet strength that I have seen in very few decks. Gone are the layers of Kabbalah, away are the astrology symbols and Judeo-Christian robes and accoutrements. Stripped of these the cards come forth in their core beings. Here are proud figures with pasts, presents and futures. Places hewn from rock and objects worn with time. People that have seen a few things and know secrets.The most striking one will notice when landing out the cards is the masterful use of negative space in the paintings.

Much fuss has been made by this deck in the past few months and I must say that it was all worth it. The creative team of Linnea and Peter have brought a style and sophistication to the tarot world that few others have done. Nothing in the production was done without great detail. The clean line ascetic of their BrUt Tarot and the upcoming Eros watercolor deck show the range that this company is willing to show.

Pagan Otherworlds may not be everyone’s cup of tea. There are those that like a magpie collection of symbols and images to grab and so this deck may look to be too plain. For those of us that use quiet intuition and enjoy looking at the details of the whole picture and how the web is woven from card to card decks like this will be cherished.