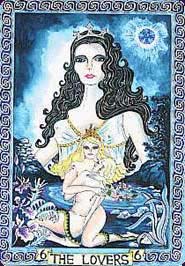 The Pagan Tarot (Tarot 2000) is a Pagan tarot deck for the new millennium, published in Cornwall, England in 2000. The card artwork is a hand painted and quite busy style with a border of Celtic knotwork.


Card Images from the Pagan Tarot 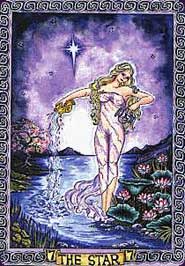 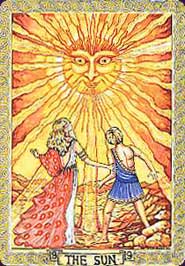 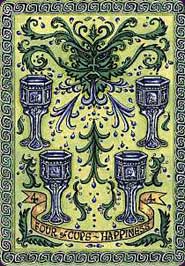 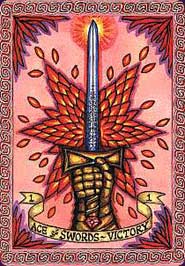 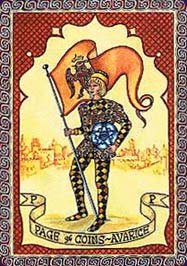 I was looking for a new tarot deck that I could use for my readings. I wanted something that could transport the questioner to within his/her psyche as-well as myself. (I believe readings should involve the other persons intuition as much as mine in order to aid them as much as possible.) I was trawling through eBay amongst the hoardes of tarot decks for sale by various 'new artists' and even searching the earlier decks for imagery that would captivate. And then I found the picture of a lion's mouth wide open with a scene just beyond. A woman gesturing towards the gateway he was offering. This was the Fortitude (strength) card and instantly I found myself journeying into the picture and experiencing the 'daydream.'

I had no idea of the name of this deck as the lady selling them on eBay did't either! I didn't care. I had to find the name and ended up labouriously clicking on all the listed decks on the Aeclectic Tarot site. After about an hour of searching I found it - THE PAGAN TAROT 2000. Dreamy, trance inducing Trumps with a minor arcana that instead of being bunged up with the artist's self discovery, simply suggests the element represented and by use of a cue word, allows the reader to 'open up' to circulating impressions.

This deck would maybe suit those already interested in Tarot, however I feel that with study, anyone could use these cards to great benefit. The colouring is almost subliminal in effect and the just to enlighten you further, the accompanying book has 'odes' or 'prose' laced with the age old symbolism hidden by many other christian based decks for so long. A full 78 card deck which, incidently, has 'spookily' revealed coincidences (if they can be called that!) every time I have used them, has some of the major titles re-named eg:

Tarot cards are a very personal thing and, I know, it can take years to find the right deck. PAGAN TAROT 2000 is mine. I will always be a 'Tarot Anorak' because of my love of the art and history involved, but am so glad to have finally found a 'working deck'. I can only suggest to you that you try it for yourself.