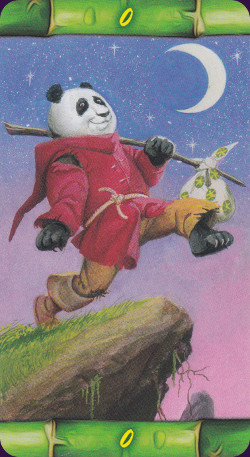 The Panda Tarot is a light-hearted (and a little cheesy) 78-card deck featuring anthropomorphic pandas in mythical Chinese landscapes. Despite the Eastern theme, it is based on Rider-Waite tarot imagery.


Card Images from the Panda Tarot 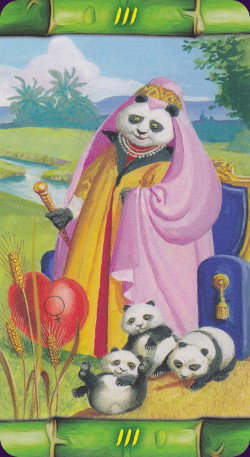 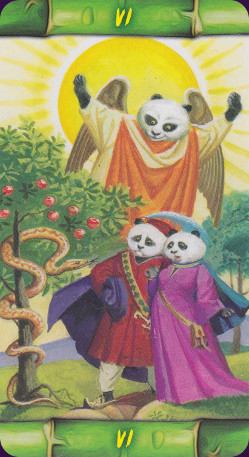 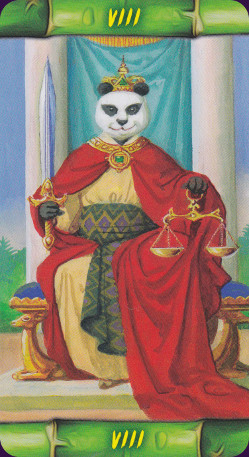 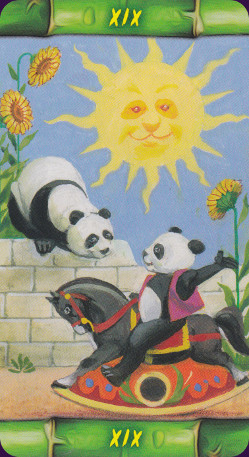 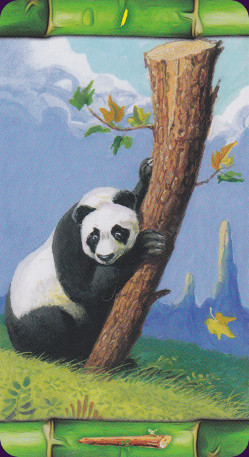 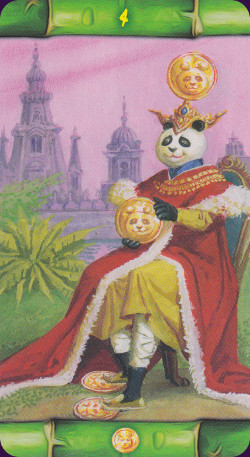 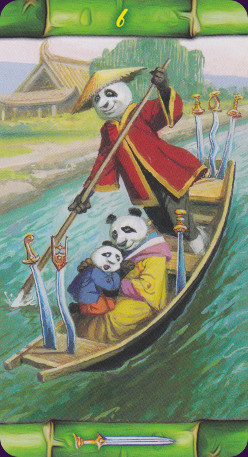 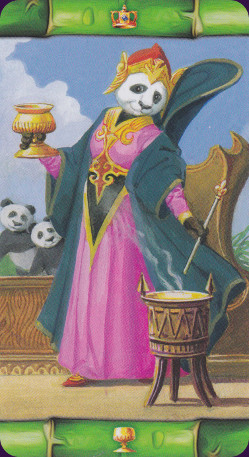 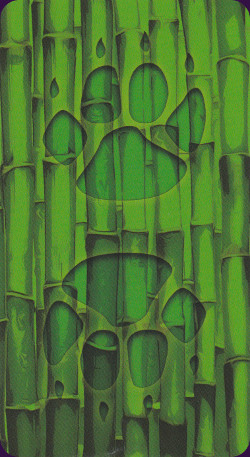 The giant panda is a symbol of friendship and peace in Chinese culture. It is a carnivorous bear, which nonetheless lives almost exclusively on bamboo and other vegetables. While in the West they are depicted as cute and somewhat clown- like, in the East they are seen as noble animals which are the living embodiment or manifestation of Yin and Yang. Giant pandas have only recently been removed from the endangered species list, which is not to say that the numbers of pandas surviving in the wild is not still desperately low.

Lo Scarabeo’s Panda Tarot is an interesting mash up of Eastern and Western traditions. This deck is essentially a Rider Waite clone wherein many scenes depicted are based on Pamela Coleman Smith's famous tableaux. The settings have been changed to give a more authentic feel to the scenes, after all it would be beyond twee to see pandas carrying out their tarot activities in a Western mediaeval setting. Somehow it seems more palatable to see them in their resplendent traditional Chinese robes with a pagoda in the background… The pandas here are anthropomorphic in that they take the place of humans and carry out human activities. They are almost universally happy, occasionally perplexed, although they are appropriately sad when the occasion calls for it i.e. Three of Swords, The Tower. In fact, the lack of sinister disposition and the unthreatening nature of the pandas depicted in the Panda Tarot make this an ideal deck if you are working with children or clients who are apprehensive about the powerful images often depicted in other decks.

The concept/conceit behind the Panda Tarot is that this deck is a reproduction of a much older deck excavated from caves in Shaanxi. The bears depicted in the deck are supposedly a race of sentient pandas who lived in much earlier times. The deck takes pandas as a living representation of our connection to nature, something of an ironic understatement – given our technological advancement and concurrent destruction of nature (and alienation from it).

This is a 78-card fully illustrated tarot deck – with 22 Major Arcana cards and 56 Minor Arcana. The Minor Arcana is divided into four suits of 14 cards each. Each suit (Cups, Pentacles, Wands, and Swords) has 10 number cards, and 4 court cards – Page, Knight, Queen, King. The Major Arcana features titles and ordering established by Arthur Edward Waite. There are 2 versions of The Magician – one in traditional Eastern dress, and one in European period costume. The Devil is a much more Western version – you know, the red guy with horns and a twirly tail - although Chinese mythology abounds with daemons of all shapes and sizes which would have fitted perfectly with the nature of this deck.

The cards measure 65 x 120 mm which is a standard size for Lo Scarabeo decks, and falls within the average range of a standard tarot size. The card stock, as to be expected from Lo Scarabeo, is a very good indeed. The card is light and sturdy, flexible without being flimsy. These cards are designed to be handled and to take a beating so they are not likely to peel or chip at the edges, and unless they are mishandled they will not crack or break. The finish on the cards is low sheen and smooth which makes the cards exceptionally easy to shuffle and handle.

The print quality is superb with all images being clean and crisp, with sharp edges, no misprints and no colour bleeds. The artwork, by Severino Baraldi, references the flat, matte colours so beloved of Chinese pop culture, as well as traditional Chinese colour schemes. Here sky blue, turquoise, fairy floss pink, grass green, and fiery red are the most dominant colours however the artist's palette is unrestricted. The artist's style is workmanlike, and of a similar style to children's book illustrations - much of the fine detail has been eschewed in favour of the overall impact and effect of the illustration. It's not great art, but it's not awful either.

The cards have no titles, the Major Arcana cards are delineated by Roman numerals while the Minor Arcana features Arabic numbers. Court cards are indicated by symbols at the top of the card, and suits are delineated by symbols at the bottom of the card. Each illustration features a green bamboo frame at the top and bottom of the illustration, there is no border at the sides of the images. The illustration on the back of the cards - tightly packed bamboo with mirror-image panda paw-prints - is reversible.

The cards come packaged in a glossy, close-fitting cardboard box which features illustrations from the Panda tarot. While this box is suitable for storing the cards in, it is not made for taking on the road. Rough handling or a harsh environment will result in the box becoming worn and torn fairly rapidly.

The Little White Book has instruction in five languages – English, Italian, Spanish, French, and Portuguese. There is no description of the cards and the divinatory meanings are given for upright readings only. Each card, Major and Minor Arcana alike, get an equal amount of space and information provided. The divinatory meanings do not stray far from standard accepted meanings, and in many cases they are far more optimistic and positive in outlook than your average interpretation. No divinatory layouts are included however a description of a three-card reading is provided in the introduction.

If you are keen on pandas, or on mythical Chinese landscapes then visually this deck will appeal to you. If you are looking for a deck which is positive in outlook, with a friendly vibe to it then look no further than the Panda Tarot. If you are a serious beginner then this deck is probably not suitable given that much of the symbolic detail is missing from this Rider-Waite-Smith based deck. However, if you are intrigued by tarot but also a little uneasy about it a deck like the Panda tarot is probably a great place to start. This is a charming, warm, and friendly deck.