The Paulina Tarot builds a magical, whimsical natural world through its 78 cards. Paulina Cassidy's artistic style is incredibly intricate and full of detail, coloured with watercolour washes in muted hues. It's a little bit Victorian, a little Tim Burton-esque, and very enchanting.


Card Images from the Paulina Tarot 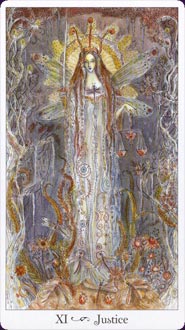 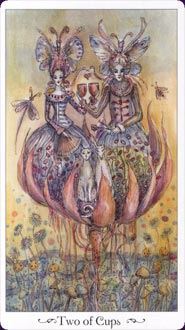 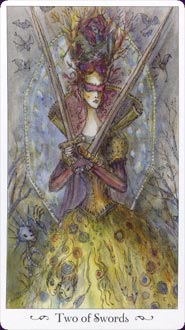 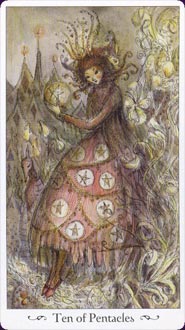 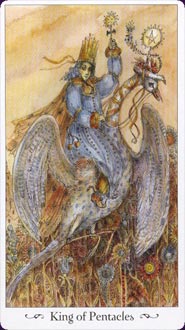 The “Paulina Tarot”, by artist Paulina Cassidy, is a traditional 78 card deck. There are two extra cards: one card carries information on the deck, while the second card carries information on the artist/author. The Major Arcana titles are traditional, with Strength as VIII and Justice as XI. The suits are Wands, Cups, Swords and Pentacles, with the Court card titled Page, Knight, Queen and King.

Before I get into the deck itself, I would like to share the information from the author’s card. The minute that I read this information, I understood how this deck came to be, and why I was reacting to it as I was. Paulina has been drawing since the age of two. Instead of just reading fairy stories, Paulina enjoyed drawing characters for her own handcrafted books and cards. At the age of 14 she began illustrating editorial cartoons for local newspapers. From there she moved on to illustrating for numerous magazines, with her work also appearing in several books and art collections. Paulina spent some time in New Orleans, a place that she says continues to exert its mystical influence on her creative endeavors. Her interests include ocean life, holistic healing, dream imagery and the Victorian era. All of this is evident in her cards, which are a whimsical, eclectic mix of symbols and images.

One thing that I very much appreciated about this deck was the LWB (Little White Book) – it was the size of the cards, with type that I could read without a magnifying glass! The LWB is text only, consisting of a description of each card, along with the upright and reversed meanings.

In her introduction, Paulina notes that she stayed immersed in each card until it was done – until it had taught her all that it had to teach. The process took 18 months, and includes some lovely spirit people that make themselves known if you look slightly out of focus at the cards (my version of how to see the spirits!). She also notes that life events seemed to coincide in some strange way with the card that she was working on. Part of the Paulina Tarot was created in New Orleans, with the imagery of Mardi Gras and Victorian influenced costumes.

Wandering unafraid, the free spirited fool imagines soaring like the birds, whose beauty and freedom inspire him. His concerned canine companion warns him to avoid risky situations. Yet the optimistic fool eagerly ventures in faith that his intuition will guide him wisely. The stony cliff is intricately shaped with memoirs left by those who have ventured before him.

The traditional ten-card Celtic Cross spread is presented at the end of the book.

The cards themselves are 2 ľ” by 4 ľ”, of good quality card stock. The backs are reversible, with a Ľ” white border surrounding a grayish background with line drawing of symbols and two winged creatures. I wasn’t sure exactly what these creatures were (other than magickal!), but they also appeared on cards within the deck, so I wrote Paulina and asked her what they represented. She told me that I could call them magickal – that for her they were what she terms birds of passage, birds of spirit. That the abiliy to take flight as a free spirit is something we all aspire to and are nurtured by.

The artwork (done with watercolors) is very much along the lines of whimsy and fantasy. The colors are muted pastels, more towards browns, grays, yellows and greens, with the occasional red and orange. The imagery in the cards is a combination of the traditional imagery seen in the Rider-Waite-Smith Tarot, and the creatures of spirit that wanted to be included in the cards (this from the author). I did find that each time I looked at a card, I saw something new and interesting. My thought with this deck is that what needs to be seen will be seen each time the cards are read.

The Three of Cups shows three lovely ladies in party dress, toasting each other. Look closer – they are standing in a field of lovely flowers, and a very interesting creature is standing between two of them. The trees arc above them, filled with fruit, and the three cups seem to have liquid being poured in them from above.

The Moon is a very eerie card, with a river running through the card, back towards a series of trees. To one side, on the bottom of he card, we see a black creature baying at the moon. On the opposite shore there appears to be a white creature. Look closely, and you will see t he crayfish emerging from he water. A snake appears to be winding itself around a tree on the right hand side of the card, and the face in the moon appears to be all seriousness.

The Six of Cups shows a female mermaid figure, leaning towards a young mermaid, who holds a cup in her hand. Five more cups appear in an arc underneath them.

Justice is a stunning card, showing a winged figure, standing, with a sword in one hand, and scales in the other. A yellow sun arcs behind her head like an aura.

The King of Wands shows a male figure, wearing a red robe with a green cloak, seated on a throne. In his right hand he holds an orbed scepter, while his left hand rests on the arm of his throne.

The Nine of Cups shows a female figure, in red, holding a cat. Arced around her head and shoulders are nine cups, resting on a living vine.

Strength shows a red winged Lion facing a female figure in white, with a lemniscate over her head. Her hat and gown show a wonderful Victorian influence.

I found that the imagery in this deck simply pulled me in! Very delicately done, following tradition, with the addition of many whimsical elements. Each card adds to a wonderful fantasy world, replete with faeries, forests, plants and animals, and unique symbols in the background. This is a deck that could be used under any circumstances, even when reading for children. It would be an excellent addition to any Tarot deck collection.

“…A charming world of energy and inspiration.” Quote from the side of The Paulina Tarot deck box.

Paulina Cassidy has created this delicate and romantic seventy-eight tarot deck with instruction book (LWB). The cards are definitely packed with detail. It is charming, has a Victorian flair, with a hint of New Orleans, Mardi Gras. Many of the characters in her art have a porcelain doll-like quality and are wearing Victorian period clothing.

The deck contains much of the Rider-Waite-Smith symbolism, as that was her earliest tarot influence. Paulina’s chosen modality for this deck is watercolor. The artwork is done in soft, muted shades.

Using this deck gives one the feeling of stepping back into a time of whimsy and magic. It takes you to a place where Dragons and Pegasus fly and many other magical creatures live side by side, comfortably with humans. Paulina mentions in the little white book, that she knows that these creatures exist even though they cannot be seen by the naked eye. You will also note many birds, butterflies, dragonflies, all in magical forest and woodland settings.

The deck is printed on a high quality cardstock and measure 4 ľ” tall x 2 ľ” wide, with a very narrow, white border. The backs are done in soft shades of beige and grey featuring beautiful birds in flight. They are reversible, for those who choose to use reversals. The cards have the card number and title on the bottom of each. Strength is numbered eight and Justice is numbered eleven. The suits follow the standard: Wands, Cups, Swords and Pentacles.

The little white book, which just so happens to be the same size as the cards, contains forty-seven pages. The Majors are listed first and the Minors follow in suit order. There is a description for each card, as well as, traditional meanings for upright and reverse draws. There is a brief segment discussing the Art of Divination, in which Paulina recommends a daily, single card draw. The LWB also includes the traditional Celtic Cross Spread and two blank pages to write notes.

This deck would be a nice fit for beginners as well as for the professional reader (especially anyone who may doing readings at a venue with a theme, such as a Mardi Gras party). The deck is also suitable for all ages. It will be enjoyed by anyone who is interested in a Rider-Waite-Smith type deck, but looking for something a little more whimsical.

Paulina was born and raised in Ontario, Canada. She has been a life-long artist, starting at the age of two. At the age of fourteen, she began illustrating cartoons for the local newspapers. Her artwork can be viewed online at Restless Moon Gallery. Her interests include ocean life, holistic healing, dream imagery and the Victorian era. She now lives in Chattanooga, Tennessee with her husband. Prior to that, she lived in New Orleans, Louisiana, which continues to be her muse.

The Paulina Tarot is absolutely gorgeous! The cards are an average sized US Games deck, both same in height and width as popular decks like the Fantastical Creatures and Fenestra Tarots. The box is a bit deeper, however, allowing more room for a nicer printed LWB. The cards are neither a high gloss nor a dull matte, but a pleasant "in between" that allows the colours to pop, but not to shine and reflect other lights.

The colour scheme of the deck is what I would refer to as a rich watercolour. Soft in some places and a few tones deeper in others. This is not what one would consider a jewel toned deck, for it has a much earthier appeal to it. This deck nicely reflects the seasons, especially spring and summer. Wildflowers, birds and bees abound, with other creatures both familiar and unfamiliar. Fae-like characters dwell in this enchanted realm and the artist brings us directly into the mysterious hidden world of the garden, field and forest. Drawing on inspirations like New Orlean's Victorian-Era Mardi Gras and the pages of fairytale books, these creatures are donned in whimsical costumes, masques, stars and bells. The artwork is incredibly intricate and detailed and it takes a lot of time to discover the many hidden enchantments on each card. Expect the unexpected!

The entire deck follows the RWS traditional meanings with an exquisite approach, making it highly readable, but the elaborate artwork allows for much development on the intuitive side. The cards have a small white border with the titles written at the bottom, so nothing is lost from the images themselves. Unique, exquisite, charming and thoughtful, the Paulina Tarot is a treat for both readers and collectors, alike!