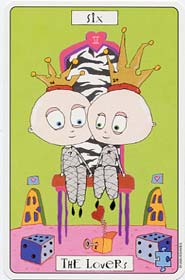 For some reason, the art in the Phantasmagoric Theater Tarot reminds me of Rugrats cartoons. It has slightly crazy and surreal tarot deck with a clashingly bright art style and symbols personal to the author. 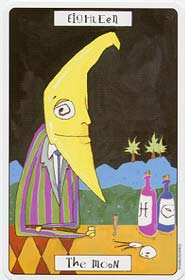 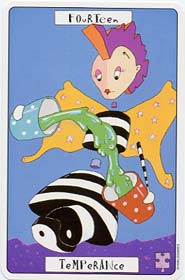 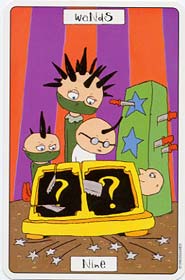 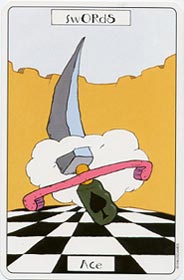 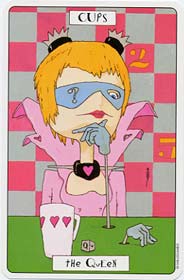 The word phantasmagoric is "a fantastic sequence of haphazardly associative imagery, as seen in dreams of fever" or "a constantly changing scene composed of numerous elements" (all according to dictionary.com) which in my mind is both an accurate description of the use and meaning of tarot and the ever-changing flow of events and experiences that make up our everyday existence.

Graham Cameron invites us to the stage of is Phantasmagoric Theatre, the stage of life. There's a script, we all know it and follow it to the best of our abilities but sometimes we forget a line, we loose our context. To reconnect to the original script we have this beautiful and somewhat eerie deck of tarots to help us on the way.

While I don't particularly agree with the theory of predestination I do enjoy the metaphor of life as a stage where we perform a "play" of sorts. I enjoy the image of every human as an actor, or artist creating her/his own piece of art in living. This particular viewpoint is also dealt with in the Saki-Saki tarot where the use of tarot and life itself is seen as a game, or a play. Which to me is a profound and very meaningful statement. Lets not forget, boys and girls, that the root of tarot is in a game. Which, at least in my view, doesn't take away from the depth and guidance one can find in it's symbology but adds to it. For if life is a game, a play, a curtain of shades as Plato would have argued, what better way to figure out the rules is there but to play?

What has Plato got to do with tarot you may wonder? Very little I suppose, but the again maybe very much indeed. To Plato the material world was an illusion, a flawed and unbalanced image of to unchangeable ideas that waits behind the veil of good, beauty and whatever. The point is what you see, what you can touch isn't real (which corresponds with the Buddhist concept of maya), it's a phantasma. "Something apparently seen but having no physical reality; a phantom or an apparition" (dictionary.com). And here we return to possible meanings of the word phantasmagoric, and as a result, a help in interpret ting this particular deck of cards.

This was all to give you a background and a spiritual depth to a deck that could be mistaken for childish and naive, and in turned believed to be of less significance then a more "mature" deck because of the style of the artwork. Of course, it is childish and possibly even naive. It chooses a view of the world that's playful and innocent, it's an in many ways new perspective to life in general and spirituality in particular which I find very refreshing and sound.

The deck in itself is loosely based on the symbolism of the classic Rider Waite deck but with a fresh and personal touch. The artwork is a very modern cartoon style (somewhat like the rugrat cartoon) which I find very appealing. I've had different responses, all my sisters loved it while my mother found it a bit unsettling. She said it was scary how these naive, childlike drawings hid such strong and sometimes, in her opinion, repugnant imagery.

The High Priest has been renamed Grand Master which I think is supposed to correspond more to the spiritual side of the priest instead of the material power (the pope etc) it might allude to otherwise. The four suits are, as usual, swords, wands, cups and (the more traditional) coins. Every suit is accompanied by a special setting. Swords play in the labyrinth, wands at the circus, cups in the desert and coins in a small city. Every card is followed by a short story about the person seen on the card her/his name, what they've accomplished, what they want, where they're going etc.

Sometimes the meanings of the cards corresponds with the traditional meaning but more often the artist of this deck takes his own path. I find it easy to follow his lead and interpret his symbols, anyone who's studied tarot and has mastered the art of interpret ting the symbology of this instrument by her/himself should be able to penetrate the symbols of this deck very easily.

Cards I've personally grown fond of is, for example, four of coins. Here we meet Candy, "a successful writer who [...] has now accumulated enough financial gain to relax". She is, in other words, balanced in her coin aspect. However, at the same time she appears to be hiding inside her pretty little house and outside we see someone less fortunate walking past with leaning on a stick. There are four coins lying on a table, but the table is tilting. This, to me, nicely corresponds with four of pentacles in the Rider-Waite deck. Where, clearly the person clutching the coins have acquired material wealth. But, in the meantime, the city behind him has shrunken so that he appears to be a towering, and gleeful giant. This to me speaks not of balance, but of unbalance, and I never could make much sense of it until I came face to face with this card and the tilting table. To me, this makes perfect sense. It is a balance, of a sort, but it's twisted wrongly.

I also enjoy the depiction of two of cups as a love that is mutual and based un unity but is unhealthy in the way that it's completely shut of from the outside world (two beings completely covered in clothing getting nutrition from tubes leading out of their mouths, they're so close they've begun melting into each other). A more healthier love is seen in ten of cups (a bond based on mutual friendship) and in the lovers who both give a childish, innocent and equal view on love. The traditional meaning of seven of coins is made clearer her, a vegetable patch where coins grow to the joy of Ryan "a dedicated and hard worker". The meaning of the Judgement card is given a more modern view as it shows it as the great, big party, as do death seem to dance like life (yes, haha) depended on it rendering a positive and affirmative dimension to the issue of "change".

Three cards that I responds very strongly to myself is seven of cups, the ultimate card of disillusion. We here meet Scoop who's realising his current job as "glove puppet master" isn't leading anywhere. The plead of a dear friend is not enough to keep him in the Water Cup Desert, he must surely take his leave. Also the six of swords where we see a madman dancing on the roof with swords in hands while a more quiet individual watches him from a doorpost, a great take on different perspectives you can assume. The eight of swords show us a blind man stumbling trough space on his search for a solution to his problem. A very speaking image. And, finally, I think that the image of the chariot as a flying saucer led by sea horses as both charmingly whimsical and an insightful take on the marriage between sky and ocean, intellect and soul.

I have, and will continue too, enjoy this deck immensely and hope that other will find joy in it as well. It is a very unique piece though and I supposed it appeals to only a handful of people. To those who find the imagery compelling though I highly recommend it!