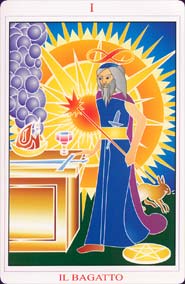 Titled in Italian, Paola's Phoenix Tarot deck has been created in an unusual, beautiful and very striking style that looks almost like layers of coloured paper. Previously known as Paola Angelotti's Tarot while unpublished, it's now in print as the Phoenix Tarot.


Card Images from the Phoenix Tarot 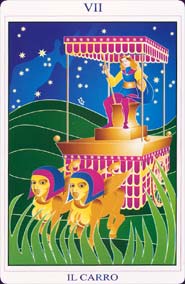 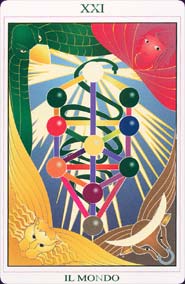 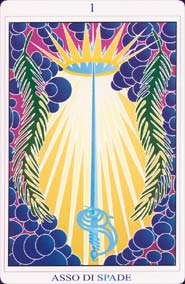 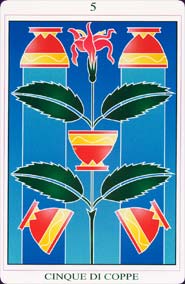 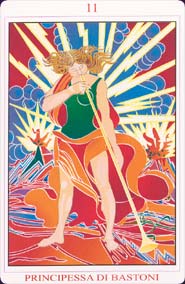 The Phoenix Tarot was self-published in 2003, with a numbered and signed edition of 500. When I first saw it on eBay as an out-of-print deck, I fell in love with the Hermit Card (L’Eremita). The Hermit card has always been one of my favorites, but something about this particular one — its shape, its colors (green, violet, and a touch of blue), it’s robed mystery — drew me in. I even printed it from the Internet and framed it long before the deck arrived.

Although still self-published (but not numbered or signed), this edition of the deck is now available through Paola Angelotti’s Web site, the Tarot Garden, and Alida.

If you are drawn to the cards of this deck, then assuredly it is a deck for you, whether you are a beginner or a more experienced reader. It is not, however, an easy deck, and the pip cards are graphic designs. Its throbbing and vibrant colors and myriad shapes may draw you in, but the heart of the deck is rooted firmly in traditional counterparts, such as cabala, numerology, symbology, and the many attributes of the Tree of Life that include color, scent, astrology, and much more.

The title card to the deck is dedicated to the author’s nephew Ermanno, who died of leukemia, and her own daughter Martina, who was born 40 weeks after her cousin’s death. A large, folded one-sheet card legend in English accompanies the deck, giving brief notations of both upright and reversed meanings. The cards are of sturdy stock with a matte sheen, are relatively easy to shuffle, and have a reversible solid lavender back with a grid of stars.

The card titles at the bottom of the card are in Italian, as Angelotti is a native of that country. The major arcana use roman numerals, although the pip card numbers are Arabic. Interestingly, although the Court cards as enumerated on the accompanying sheet follow a usual title pattern of Page, Knight, Queen, and King, the Italian title on the cards refers to the Page as “Principessa” or Princess, whereas the Italian for Page would normally be Paggio.

Angelotti has won several international computer graphics contests over the years, such as the Corel World Design Contest. Although the majority of her artistic work is quite realistic, the tarot cards are graphically oriented. She said it is easier for her as an artist to produce realistic art. “It’s possible to paint a portrait in a couple of hours, but it takes years for a deck,” she said.

The figures are for the most part representational, more like colored line drawings, which may be an artifact of the way in which they were created with CorelDRAW® and a mouse. Nevertheless, they emerge as arresting figures that fit in well with their colorful surroundings, and they were chosen deliberately by the artist in order to utilize certain negative space patterns. If the figures lean a bit to caricature, it may be that they are only carriers of information, which moves through the cards by means of color and shape.

The Strength and Justice cards are switched (Strength is XI and Justice is VIII). Although the pip cards are not figural, they are not randomly decorative. A clue to their meanings may lie in card XXI, The World (Il Mondo), which normally leads into the minor arcana. I say “normally,” because here the Fool (Il Matto) is card XXII instead of “0” or “no-thing-ness” at the beginning of the deck. Here The Fool bridges the journey from the major arcana — which ends with the Tree of Life as The World — into the colorful and representational minor arcana.

Angelotti said the deck was inspired by the Golden Dawn’s teachings, and partially by Aleister Crowley’s deck. She created each card using brilliant colors so that the reader would retain a negative image called a phosphen, an image that remains in the retina after staring at a bright color for a few moments. “The phenomenon was observed the first time by John Dee,” she said, “And he supposed it was a door for the angelic world, or perhaps simply a way to see things from another point of view.” In any case, colors and shapes draw the tarot card reader into each card. Repetitive icons play a part in the cards as well.

Angelotti notes there are symbols hidden among the shapes, and that repetitions are not “banal copy and pastes.” The roses of the Empress card are repeated on the Ace of Pentacles (Asso Di Pentacoli), and again but in blue on the nine of Pentacles (Nove Di Penacoli). The numbers move from the major arcana to take their places of importance in the minor arcana. All the attributes and synchronicities of the cards are knitted together for the perceptive eye, providing both information and inspiration to the reader.

For example, the backgrounds of both The Fool and The Emperor (L’Imperatore) are the same. Here the reader may note that The Fool at number 22 reduces to a foundational four, a solidity that is almost diametrically opposed to the “no-thing-ness” of the Fool number that is a zero. The Emperor is likewise a four, a solid figure that is in control of things. The yellow roses of the Fool card repeat on the six of Pentacles, and we begin to realize this Fool is not a willy-nilly devil-may-care fellow, so much as someone who is truly intent on aspects of “becoming.” The signs in the cards abound, and they are intentional guideposts to further study for the reader. This seems apt, as the tarot should never be a stopping place, only a resting place on the journey.

It is for the reader to discover the numerous intersecting pathways that lead to meaning in this fascinating and beautiful deck.

The back of the box quotes (in Italian) a final passage from Dante’s Paradiso Canto XXXIII, which cleverly incorporates the elements that Angelotti brought into her designs through her love of the tarot and its inspiration:

As the geometrician, who endeavours
To square the circle, and discovers not,
By taking thought, the principle he wants,
Even such was I at that new apparition;
I wished to see how the image to the circle
Conformed itself, and how it there finds place;
But my own wings were not enough for this,
Had it not been that then my mind there smote
A flash of lightning, wherein came its wish.
Here vigour failed the lofty fantasy:
But now was turning my desire and will,
Even as a wheel that equally is moved,
The Love which moves the sun and the other stars.