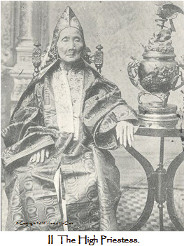 The Picture Postcard Tarot is a full deck put together from vintage postcards from the early 20th century. The images show the culture, context and expectations of humanity just over 100 years ago. It's a 79-card deck, with the usual 78 plus a Happy Squirrel card. It was available in a self-published, limited edition of 50 decks from the artist, but is now sold out. 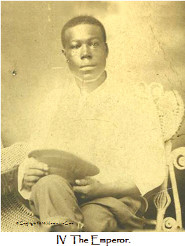 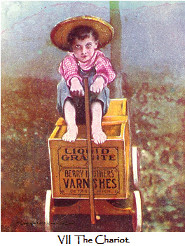 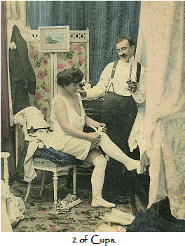 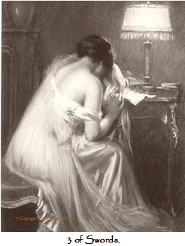 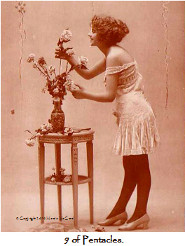 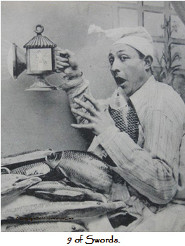 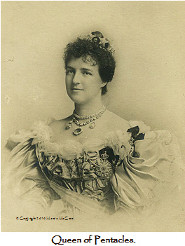 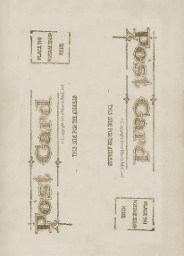 I feel very blessed that I fell into a forum conversation concerning this deck, just at the time that it was getting ready to go to press! (This is also the same time period that the “Tarot of the Boroughs” came into my life.) This is a Limited Edition of 50 signed and numbered decks (which I believe is sold out). Marcia was very gracious in that we got to pick the deck number that we wanted, and I was lucky enough to get the number that I asked for – number Nine, for the Hermit (one of my birth cards).

In her notes, Marcia comments that between 1900 and 1909 picture postcards were the e-mail, text message and Tweet of their time. That has really not been all that long ago! She goes on to say that picture postcards were approved by the US Post Office Department in 1898. Same day delivery allowed friends to keep up with the evenings entertainment, as well as personal news.

In the older picture postcards the back of the card was reserved for the address only. This has been very nicely taken into this deck, where the card backs (which are reversible) portray the back of a vintage postcard – including the stamp! The images for this deck were taken from photograph postcards from this period.

This deck is dedicated to Marcia’s mother, who died of breast cancer in 1983. Her mother had run an antique shop for over twenty years, and their last conversation concerned antique postcards. I love visiting antique shops, and adore the ones that have vintage books, postcards, knick knacks and cloths. I step into a world that I love, if only for a short time.

The traditional 78 card format is followed, with the lovely addition of the Happy Squirrel. I do love decks that include this card – an automatic smile! An extra card is included – a cover card with the date and deck number. Traditional titles are followed, with Strength at VIII and Justice at XI. The suit titles are Wands, Cups, Swords and Pentacles. The Court Cards are entitled King, Queen, Knight and Page.

The LWB (Little White Book) contains an introduction by Marcia, followed by a few words on the imagery/background of each of the cards. From the LWB:

“The High Priestess – This Hue priestess captured the look of dedication to guardingthe mysteries, a lifetime commitment.

The Sun – When the sun shines, all the world looks golden at Chautauqua Lake, New York.

Ace of Pentacles – A 1908 card with an American Liberty coin.

Three of Swords – Like swords in the heart, or reader succumbs to great sorrow.

Queen of Cups – Lili’uokalani, Queen of Hawaii, was originally named Lydia Smarting Tearful Anguish The Sore Eyes, but her name was changed by her brother to “the smarting of the royal ones”. She had a tumultuous life, including being imprisoned and force dto abdicate her throne to commute fellow prisoners death sentences. Her music, and her Queen Lili’uokalani Children’s Trust to help orphaned and indigent children live on today.”

Before we go into the cards, I have to discuss the packaging! One of the reasons that I am such a fan of indies (independent publishers) is that the can present their product as they see ift, and that they generally see the packaging as part of the presentation. Marcia has done a bang up job with the packaging for this deck – the box is heavy duty cardboard, and looks like a steamer trunk, complete with ink stamps on the sides. It has a lift off top, which has the decks name superimposed over the image from the cover card – that of a beautiful Argentine woman. The cards come wrapped in waxed paper, and tied with brown string. There is also shipping information included within the box, so that should it not make it well through the mail, whoever found it would be able to get it to the intended person. Now, this may not have been Marcia’s intention when she boxed the decks up, but it could well be one version of life! The other version might be that specific decks need to go to specific people, as this is a Limited Edition deck, and the deck numbers were chosen by the recipients. So the inclusion internally of the shipping address and deck number were for the benefit of those doing the final packaging. ;-)

The cards are a small size – 2 ˝” by 3 ˝” – greatly appreciated by people like me who have both smaller hands and arthritis! The artwork is taken from photographs of antique postcards, and is a combination of sepia toned and colored. Several diverse cultures are included in this deck.

There was really only one card in the deck that I did not relate to, and that was the Hanged Man. The back story here is that this is one of two postcards that Marcia found that applied to this archetype – the other one being a literal hanging, which I for one am very happy that she did not choose to use! In this card, we see an individual hanging in mid air, legs flailing and arms down.

The Magician shows a gentleman in formal attire, wearing a fez and holding a magic ball in one hand. The Emperor (one of my favorites!) shows a gentleman sitting on a wicker settee. Marcia notes that due to overexposure of the film, a halo effect was created over his heart. Yes – our Emperor needs to lead with his head and his heart!

I adore the Chariot, which shows a young boy, wearing a straw hat and sitting in a child’s wagon, made from boxes, very intent on controlling his vehicle! I also adore Death in this deck - which shows two skeletons smoking and playing cards. Hey – it is cute! ;-) The Queen of Pentacles shows a beautiful photograph of the Queen of Portugal. (I do so love these sepia tones!)

All in all, the imagery shows a good representation of this time period. I love the cloths, the atmosphere, the attitudes – I love the whole thing! For those who may be interested in Indie decks, Marcia has two more possible projects in the wings. Let’s support our Indies, Ladies and Gentlemen!