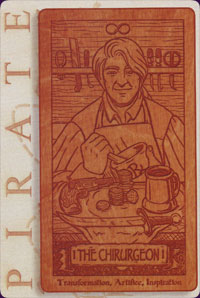 The Pirate Tarot is Schiffer Books printed edition of the wood-carved Pirate Tarot. It's a full 78-card deck with a Rider-Waite basis, and a fantasical piratical theme. The only downside is the very large borders added to this edition.


Card Images from the Pirate Tarot 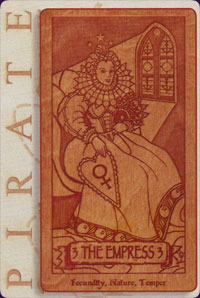 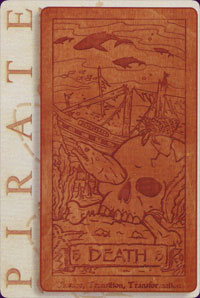 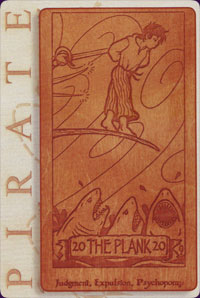 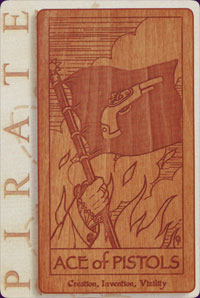 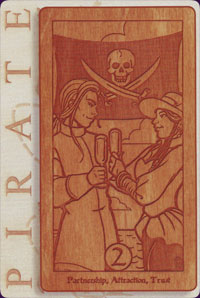 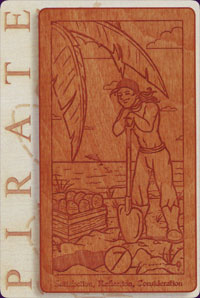 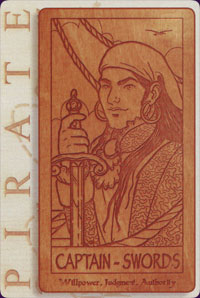 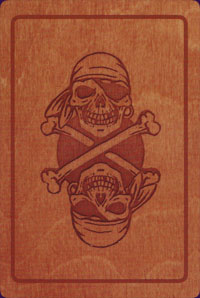 Arr, shiver me timbers - it’s a wood-carved tarot deck! Right, now I’ve got the pirate speak out the way, let me tell you about the deck of the fantasy buccaneers, the Pirate Tarot.

The original limited edition Pirate Tarot was the first wood-carved tarot deck I’d ever seen. Linocut or etched prints aren’t uncommon on tarot cards, but the original edition had actual wooden cards with the imagery laser-carved into cherry wood. This, the printed card-stock edition from publishers Schiffer Books, has tarot scenes that are identical to the carved version.

It’s also an easy to follow deck for beginners. With its Rider-Waite basis, it can be used with a generic tarot book to assist with making meaning from the cards. That’s if there is a need to – the deck is clearly and cleanly etched and blends tarot symbolism with well-known pirate imagery. Using the cards for readings is made even easier by the addition of three keywords at the base of each card (which are part of the carvings, not a publisher addition), for quick interpretations.

The major arcana titles have mostly been changed to fit the piratical theme. They are:

0 – The Fool
I – The Chirurgeon (which shows a combination surgeon, apothecary and first aid officer)
II – The Figurehead (as in the figurehead on the prow of a ship)
III – The Empress
IV – The Emperor
V – The Bosun (who is the man in charge of the deckhands)
VI – The Lovers
VII – The Chariot
VIII – Strength (showing a girl holds the tiller fast during a storm)
IX – The Hermit
X – The Winds
XI – Justice (she holds a noose as well as scales)
XII – The Hanged Man
XIII – Death (a sunken ship and skull, of course)
XIV – Temperance
XV – The Devil
XVI - The Tower (the main mast has broken, and someone is falling)
XVII – The Star
XVIII – The Moon (a ghostly galleon, sailing under a full moon)
XIX – The Sun (a happy, virtually smiling ship’s cat)
XX – The Plank (an unfortunate young man walks the plank)
XXI – The World


Two cards are really effective translations of typical tarot symbolism to the pirate scene. I like the choice of The Winds and the compass image for the Wheel of Fortune equivalent: a ship and its crew are at the mercy of the winds to bring them safely to their destination, much like the Wheel is a symbol for fate or destiny. The Star also becomes directly related to pirates; the guiding light of the star is not just backdrop but a vital navigational tool when far out at sea. A pirate holds a sextant and checks the course of the ship by the star and their mathematical calculations. The pirates on the whole are very clean, well-fed and civilized looking people, almost Disney-ish pirates.

Strength was my favourite card in the deck; a young girl in a ragged skirt holds the wheel of the ship steady, through storm-tossed seas, rain and lightning. Close behind was the Seven of Coins, where a bandanna-wearing pirate - on a desert island with palm tree, naturally - pauses to lean on his shovel in the middle of burying an overflowing box of coins. Judgement is perhaps one of the most familiar pirate scenes - the walk off the plank. A young boy walks gingerly along a flimsy-looking plank, a sword held by an invisible antagonist prodding him along, and three toothy, very hungry sharks below.

The suits of the deck are altered to fit the theme, as are the court cards. The suits are Coins (Pentacles), Cups, Pistols (Wands) and Swords, while the courts are unique: Cabin Boy, First Mate, Lady Captain, and Captain.

The deck package is relatively simple; just the outer flip-top box, a fold-out companion leaflet, and 80 cards (the two extra are non-reading cards; one promotes other pirate-related products from Schiffer, the other is a title card with info about the deck). The leaflet has a few common tarot spreads, and less commonly, instructions for playing card games with the tarot deck. This harks back to the original uses for tarot cards – long before there is recorded evidence that they were used for fortune-telling or spiritual purposes – they were used to play card games.

There is one major downside to the Pirate Tarot, unfortunately. The cardstock edition has had large white borders added, with the word ‘PIRATE’ running down the left hand side. I thought this was rather unnecessary - I can usually remember which deck I am using without a visual aid on every card – and it increases the size of the cards and difficulty of shuffling without the benefit of more detailed tarot scenes.

That said, this is a decent entry into the tarot world for the beginner. Who is not familiar with the image of a pirate captive being made to walk the plank, or the pirate in the midst of burying his treasure? Sometimes difficult tarot imagery becomes linked with more familiar pirate myths and legends, giving the beginner an easy angle to understand the cards.

Even for those well past the novice stage - if you don’t miss Talk Like A Pirate Day each September, you won’t want to miss having the Pirate Tarot in your collection.

The Pirate Tarot is a 78 card, pirate themed deck using the traditional foundation of 78 cards – 22 Major Arcana (Strength VIII, Justice XI) , 40 Pips (numbered cards) and 12 Court Cards. The traditional Major Arcana titles are used, with the following exceptions: The Chirurgeon (The Magician), The Figurehead (The High Priestess), The Bosun (The Hierophant), The Winds (Wheel of Fortune), and The Plank (Judgment). The four suits are Pistols, Cups, Swords and Coins. The Court Card titles are Captain (King), Lady Captain (Queen), First Mate (Knight) and Cabin Boy (Page).

The deck comes in a box that opens on the top, from the back. At the top on the back side is a 1” high section with a cutout in the middle, so that the cards can be hung in a store environment for viewing. This presents a problem for storage, but the section can be cut off without affecting the box itself.

There is no companion book or Little White Book (LWB) accompanying the deck. There is an extra card that gives a few facts about the deck (such as the fact that the deck came about when the authors were looking for a deck that could be engraved on wood. In the spring of 2006 the 22 Major Arcana cards were engraved onto Cherry wood, and originally sold through the authors company – Dragonfire Laser Crafts. The entire deck is presented (for the first time) through Schiffer Books. Wooden copies are available through the authors website – www.dragonfire-games.com.

There is an insert that comes with the deck that presents two spreads – the Three-Card Spread and the traditional Celtic Cross Spread, along with instructions for the trick-taking game of Tarrochi.

The artwork on the deck is line drawing, with great attention to detail. An effort has been made to follow traditional Tarot imagery (translated into the Pirate theme). There is a true sense of fun with this deck that makes it very easy to work with.

The cards are approximately 3 5/8” by 5 Ľ”, of good quality, glossy card stock. The backs are light brown (wood colored), with a 1/8” dark brown border inset Ľ” from the outside edge of the card. The middle of the card features reversible pirate skull and crossbones.

The card faces show a 1/8” white border on the top, bottom and right hand side. On the left hand side there is a 1” white border, with the word Pirate running from the bottom to the top of the card, in large, light brown lettering. The imagery on the cards is dark brown lines on a lighter brown background. At the bottom of the image is the card title (for the Major Arcana), the title and suit (for the Court Cards), or the card number (for the Pips). Underneath the card image for all of the cards, in small, dark brown lettering, are keywords.

Some of my favorite cards are:

The Sun (keywords Contentment, Clarity, Confidence) – The imagery here is that of the sun and clouds in the background, with a very pleased cat in the foreground, holding a pirate banner in his right paw, with his left paw on a fish (the scene is on the deck of the ship).

Temperance (keywords Synthesis, Harmony, Moderation) – The imager here is that of a pirate, shown standing on the shore by a tree, water in the background and the sun setting, pouring liquid from a cup in his left hand to one in his right hand. On his head is a jug, with the symbol of a upward triangle within a square on it.

Strength (keywords Courage, Fortitude, Patience) – The image here is that of a young girl, at the wheel of the ship during a storm with wind, rain and lightening surrounding her. (I do like this card, but it does veer off to the side of physical strength over the traditional sense of internal choice.)

Six of Swords (keywords Endurance, Mourning, Journeying) – This is an interesting card. It shows the traditional figure in a boat, looking down as the boat crosses the water – but there is no one piloting the boat.

Ten of Coins (keywords Affluence, Reflection, Retirement) – The image her is that of a pirate, sitting at a table, smoking his pipe. His right hand is on the map in front of him (there are several maps on the table, along with a caliper).

Justice (keywords Balance, Consequences, Responsibility) – The image here is of a female figure, standing, with the scales in her right hand and a hangman’s noose in her left hand. Hanging betweent he two pillars behind her we see a banner with a skull in the center, what appears to be a staight bone under it, a heart to the left and a knife, pointed down, to the right.

Some of the keywords are used on more than one card, but I feel that if they are taken into consideration with the overall energy of each card that this is not a distraction.

This deck would be of interest to collectors, or to those with an interest in the pirate theme in general. The artwork is beautifully done, which makes this deck one that is fun to work with. It can be readily used by all levels of readers, but would more than likely not work for ritual or ceremonial purposes.