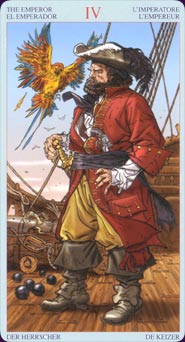 The Tarot of Pirates is a deck of legends of piracy on the high seas, illustrated in detailed and realistic colour. It features all the aspects of pirates you would expect - golden treasure, the plank, galleons, swashbuckling pirate leaders - but it still a workable reading deck.


Card Images from the Tarot of Pirates 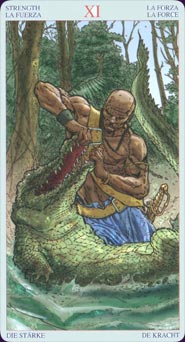 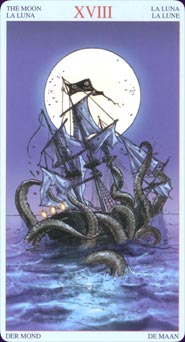 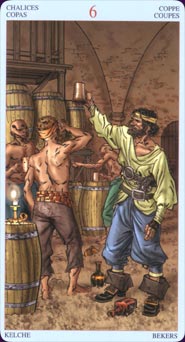 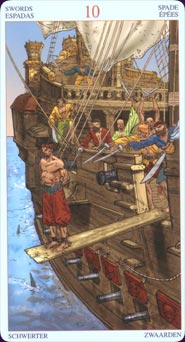 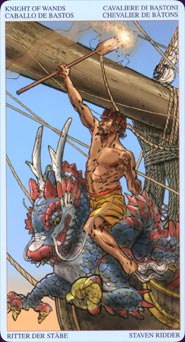 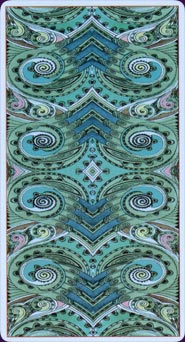 I awaited the release of Lo Scarabeo’s Tarot of the Pirates with great anticipation, but I’m not exactly sure what it was that I was expecting. Pre-release details about the deck were sketchy; very few samples of the artwork were available. When I finally received my copy in the late spring, I’m not sure if I was happy or disappointed.

The deck is an idealized or romanticized view of the pirate life, not a historically accurate one. The LWB states: “Thanks to literature and cinema, pirates have become a symbol of courage and audacity, the emblem of freedom and adventure. . .This romantic legendary idea rather than their true history, rich in cruelty and notoriety, was the inspiration for the Pirate Tarot Cards.” Many of the scenes depicted in the cards could have been plucked out of Disney’s Pirates of the Caribbean series, yet I would not recommend the deck for children. The sexual situations, drinking, violence, bare breasts, hints of prostitution, and a woman apparently defending herself against unwanted sexual advances in the 8 of Swords makes the deck, I feel, inappropriate for pre-teens. That having been said the Tarot of the Pirates is a fun deck, featuring colorful comic book like pirates with a heavy infusion of testosterone and a selection of buxom pirate women in the various types of situations one would expect in a romanticized view.

The cards are a standard size for a Lo Scarabeo deck, laminated to endure heavy use. The backs of the cards are a pleasing oceanic pattern which is suitable for reading with reversals. The colors used are bright and vibrant, the border minimal with the cards number and title in 4 different languages. The little white book is typically sketchy, offering the meanings of the cards in the upright positions only.

In the Minor Arcana the 4 suits are titled pentacles, chalices, swords, and wands; the actual pictures on the cards where symbols are seen are goblets and barrels for cups, coins for pentacles, oars for wands, but swords are depicted as swords in this case. This deck is far from a RWS clone, while in some rare cases, like the 2 of Swords, the scenes depicted cannot be readily read with standard RWS interpretations. In the tarot court we find Knaves, Knights, Queens, and Kings; the males being muscular and adventurous, the woman strong and masculine looking. The Major Arcana are the more typical Archetypal images one is familiar with but with a nautical flair. Here we find the only portrayal of any virtuous women in the Empress and Temperance. Strength is number 11 and Justice is 8. I particular like the take on the majors, the Moon shows a giant Octopus attacking a sailing ship, Strength a pirate closing an alligators mouth. In order to use this deck one would really have to study and become familiar with the definitions in the LWB or read intuitively.

For those wanting a non-traditional, masculine, and novel deck for readings this deck will appeal. For others seeking a more traditional approach for the Tarot, you are bound to be disappointed in the minors. As for myself I find it a novel and fun deck to add to my collection. It might be a good deck to use for readings for teenagers or men; women may feel excited about the strong females who can rival the gusto of their male counterparts. In this deck Girl Power definitely rules when it comes to depiction of women; you certainly won’t find any frail, pretty young females in need of rescue; they definitely can take care of themselves.


Complete Details of Tarot of Pirates


Similar Decks to Tarot of Pirates