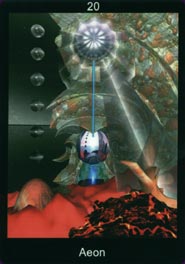 A self published, high quality tarot deck, the Portal Tarot has intricate computer-generated art on its twenty-two cards.


Card Images from the Portal Tarot 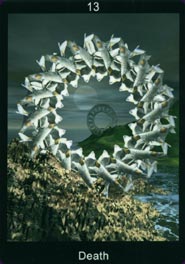 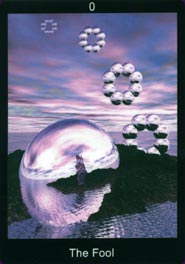 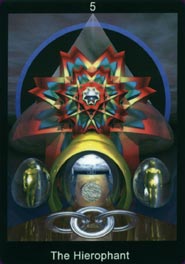 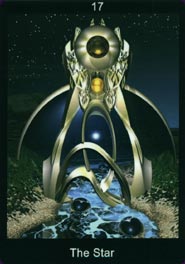 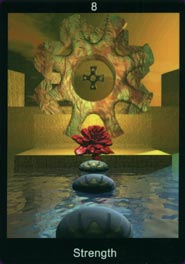 The Portal Tarot came into being when Traci, by chance, found David's art on the Internet. She was struck by the beauty of his 'portal' images, wrote to suggest the art would make a wonderful tarot deck, and the collaborative deck was born. (Traci brought the tarot knowledge, as, according the companion booklet, David had only the barest idea of what tarot was previously.)

More a meditative deck for self-awareness than for divining the future or doing relationship spreads, the cards of the majors-only Portal Tarot are not designed on traditional or historical tarot symbols. Portals are explained as the gateways to sacred space, a point of transition, an entrance to the Mystery, and as such the cards are an exploration of the archetypes of tarot.

The art is computer generated and has been printed to retain as much detail and colour as possible. The landscape of imagination holds fractals, spherical patterns and three-dimensional shapes, mandalas, helices. Only the Hierophant and the Hermit show human figures; the former encased in bubbles at the foot of the 'altar', and the latter encased in crystal. For the most part the symbology is alien, as though set on a different planet settled by a sentient life with technology unknown to us.

As an independently published tarot, the Portal cards and book have been meticulously produced. The cards are thinly laminated and have had the excess trimmed and corners rounded. They are then packaged in a black satin bag, with an unhusked almond its only decoration. The medium-sized LWB has been bound with a black ribbon, with a little extra to use as a bookmark, the wooden bead on the end weighting the pages down just enough.

For each tarot card, the book shows its black and white images, four traditional keywords, and half a page on the Portal Concept, the card's meaning in this specific deck. There are also three 'I' statements associated with each card...

The Fool I am born blind but see I feel but do not know I begin and end.

Two pages are also devoted to a suggested four-card spread and an imagination exercise to enter the Portal and hold a dialogue with the card.

A tarot experiment combining David's love of art and Traci's love of tarot, the Portal Tarot should appeal to techno-tarotists and those fond of high-quality art decks.