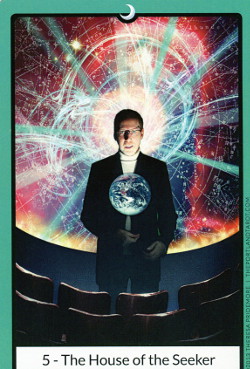 The Portland Tarot is a love letter to one of my favourite cities - Portland, Oregon in the USA - by local artist Theresa Pridemore. It features assorted weird and quirky characters set against backdrops from the city itself. The deck is an ongoing project: this is the 23-card majors only deck (there's an extra card that represents 'The Weird'). The complete 79-card deck is to come in future.


Card Images from the Portland Tarot 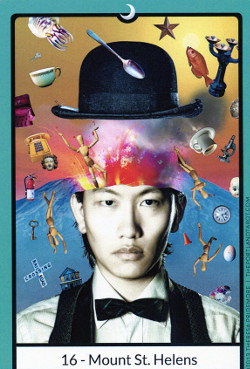 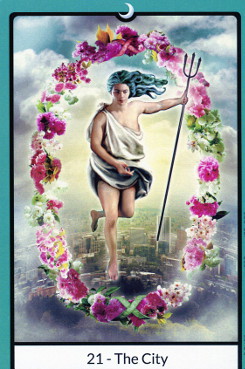 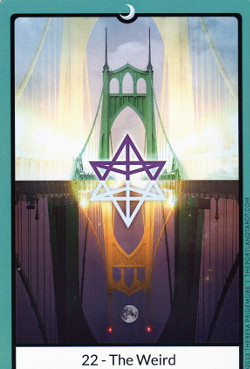 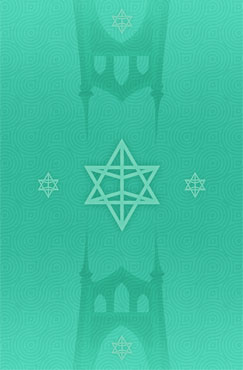 There definitely is such a thing as serendipity! I had been hearing about the Portland Tarot, and kind of filed it in the back of my mind. Then I was contacted by Jamie Morris, co-author for the companion book for this deck. We chatted a bit on Facebook, and she asked me if I would like to see the cards. I told her I would love to see the cards, and I now have them in my hands! I am absolutely thrilled!

The Portland Tarot is an ongoing project … the 23 Major Arcana cards have been finished, with the completion of the Minor Arcana tentatively scheduled for the end of 2014. (Funding for the Minor Arcana, and publication of the full 79 card deck, is currently being sought.) And yes, I did say that the Major Arcana consists of 23 cards! As with the Touchstone and Sakki Sakki Tarot decks, there is an extra card. In this deck, the card is entitled The Weird. Morris talks about this card representing the “space between spaces”, the moments when all has dissolved and has yet to re-gel and possibilities whip in the wind around you. The card acts as a bridge between worlds, a time when your current reality feels all “wibbly” and anything seems possible. Not yet The Fool, in The Weird, the tides of connectedness, magic and trust tug at you. Stay alert! Shapeshifting is possible! This card will be kept in the full 78 card deck, but the imagery may undergo some transformation. It’s all good!

In the LWB (Little White Booklet) that accompanies the deck, it is noted that Portland (Oregon) and this deck have a lot in common – that eccentrics and independent thinkers will find inspiration and insight in both. Both are at the same time forward thinking and grounded in tradition, and through both one can take one’s first steps on the path to intuition.

Pridemore talks about the Portland Tarot as being dark, but funny (and it is!), modern, yet infused with symbols of the ages (and it is!). Probably my favorite card in the entire deck is Mount St. Helen’s (The Tower). Here we see a very calm looking gentleman, dressed in a white shirt, black vest, and black bow tie, wearing a black bowler (hat) that has been blown off his head. All kinds of symbols come exploding out of his head! Profound, insightful … and incredibly funny! (To me, anyway.)

The deck is meant to act as a bridge between the old and the new, reimagining ancient themes with modern whimsy. This it does, and does well. The bridge theme is carried forward into the three unique Tarot spreads that are presented. Developed by Morris and Pridemore together, each of the three spreads is based on three cards: (1) You Are Here, (2) View Across The Bridge., and (3) The Bridge. Each spread is designed to answer a specific type of question. Spread 1, The Fremont Bridge, is used for practical advice on daily matters. Spread 2, The St. John’s Bridge, is used for inspiring insight into self-initiated transformation. Spread 3, The Vista Bridge, is used for guidance and encouragement during times of difficulty or loss. The three positions retain the same name in each spread, but are defined in a different matter. And yes, these bridges do exist in Portland!

The LWB covers background on the deck, how to use the cards, a short bio on Pridemore, what is coming up for the Portland Tarot, a lovely section on the Tarot Daily Commute (discussing using the Portland Tarot as your daily bridge to the Divine, with three suggested routes: (1) The Daily Draw, (2) Three-Card Stories, or (3) Dream A Little Dream. The three spreads are presented in depth, and there are keywords presented for each of the cards.

The cards themselves are 4” by 6”, which are a bit large for smaller hands. However, the deck is so much fun to use, the reader will find a way to shuffle! The backs are a turquoise color, with a large white merkaba in the center, and a smaller merkaba on each side. Over and under the merkaba is a bridge, with a small merkaba under it. The backs are reversible.

The card faces show a Ľ” turquoise border, with a thin black border on the inside. Centered on the top of each card is a white half-moon. Across the bottom of the card, in black lettering against a white background, is the card number and title. The cards carry traditional titles, with the following exceptions: House of the Seeker (Hierophant), the Hanged Woman (The Hanged Man), Mount St. Helens (The Tower), and the City (The World). The extra card is The Weird.

The House of the Seeker shows a male, dressed in a white turtleneck and a suit, against a sci-fi looking background. Centered where his heart is we see what appears to be a globe of the world. The Lovers shows a male and a female figure, standing on a black and white checker-board, with a white dog with wings hovering above them There is a white rope in the shape of a heart, with each figure holding on to one end of it.

The Hermit is a very poignant figure – that of a woodsman, his foot on a tree stump, a staff held in both hands, and a lantern at this feet. The High Priestess is beautifully done, showing a Priestess, dressed all in white, standing in front of a bridge. Surrounding her, seated and standing, are a group of women. Strength shows a woman, seated, with the infinity symbol above her head. A lion stands behind her, and she appears to be petting or feeding adog that is seated in front of her.

The Chariot will bring a smile to everyone’s face! We see a female figure seated in a blue convertible, with both doors open. Behind her appear to be curtains, with the word “Hollywood” appearing on one side, and “Portland” on the other side. Seated in front of the car on the left hand side is a white dog, on the right hand side a black dog. By the way – the car wheels are not touching the ground!

This deck has character, and spunk, and is clearly well thought out. What a fun deck to work with! It has already been shown in some really neat places, like the World Domination Summit’s “Portlandia Village”, and at Sarah G. Creative.