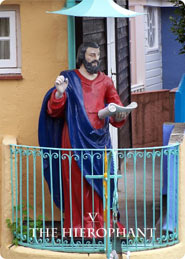 
Card Images from the Trump L'Oeil: Tarot of Portmeirion 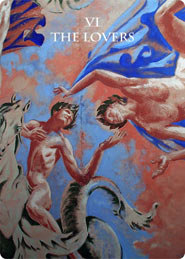 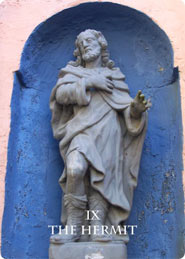 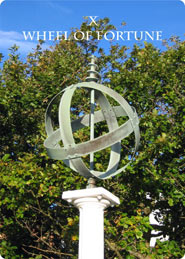 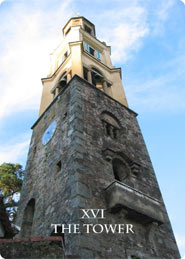 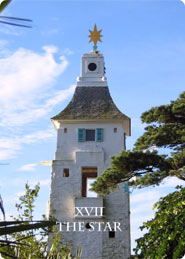 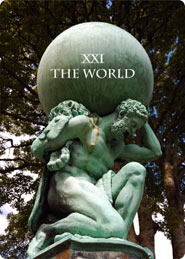 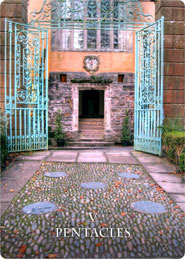 "Trump L’Oeil – Tarot of Portmeirion" is a fantastic photographic deck based on imagery found in the coastal village of Portmeirion, in Wales. Not since Ciro Marchetti’s "Tarot of Dreams" have I seen such an imaginative project, and so well presented. From the companion book:

Imagine a well-shuffled Tarot deck formulating the blueprint for an eccentric village, every picture unfolding into picturesque architecture, every background transforming into real ground, every portent a literal signpost. The idiosyncratic coastal village of Portmeirion, Wales is exactly such a place – a Tarot deck made manifest in mortar and gold leaf. Around one corner, a statue of a cherubic Fool stands blithely on the edge of a rocky precipice. Down another path, the World sits atop the shoulders of a Hercules statue, while the God-Empress Frigga looks on. Elsewhere, St. Peter pontificates from a balcony like a true Hierophant, in the shadow of a soaring Italianate Tower. Taken together, the assorted facets of Portmeirion are eerily like an elaborate spread of divinatory cards – an esoteric pop-up book of sorts in which all 22 major archetypes interrelate in three dimesions.

How did this lovely village, cascading down a lofty Cliffside, come about? It is the brainchild of Welsh architect Clough Williams-Ellis. Built over a period of years (1925-1973), Williams-Ellis was attempting to show that developing a naturally beautiful site did not mean that it had to be defiled. It was not built as a village to be lived in, but as destination to visit. Conley describes the village as experimenting with virtual reality decades before the term was invented! There is a town hall, yet there are no residents. The windows are meant to be looked at, and not into. Individual buildings are jumbles of salvaged materials from all over Europe.

Conley took this colorful, bizarre village and developed it into a Tarot deck – a full 79 card Tarot deck. (The extra card is entitled "Trump L’Oeil", and acts as a wildcard. The name is a play on the phrase “tromp l’oeil”, which means optical illusion, or “trick of he eye”. It represents a triumph over deception.

The companion art book is 7 ˝” by 7 ˝”, and 57 pages. There is a short introduction, followed by color scans of each of the cards. There is an explanation of the imagery on the card, and a map showing where the object that is the basis for the card is located in the village. From the book:

The Devil is a legendary red wyvern. This reptilian creature sports a barbed serpent’s tail, dragon-like wings, and an eagle’s talons. Wyvern’s symbolize strife, envy, and pestilence, yet their association with strength and endurance has earned a noble place in medieval heraldry. The Devil is located near the Portmeirion Hotel, above the steps leading to the shore of the estuary. In your Tarot spread, be mindful of which card the Devil faces, as it may indicate futility, pessimism, or Shadow desires lurking beneath the surface. Though the Devil is an underworld creature, its talons can lift us out of the darkness.

The cards are 2 ˝” by 3 ˝” (a great size for smaller hands!), od sturdy, glossy card stock. The backs shows a “picture postcard” village setting, with a wide expanse of blue sky, and the buildings set in amongst mature green trees, with a green tree going up the left hand side of the card. (In playing around, I found an amazing visual – if you fan the cards out in your hand, you have a great display of gorgeous green tree melding from card to card!)

The card fronts show the imagery flowing to the side of the card – there is no border. The image is centered on the card, with the title and card number in Roman numerals either on the top or the bottom of the card, and in either black or white text, depending on the card background.

The titles in this deck follow traditional structure, with Strength as VIII and Justice as XI. The suits are Wands, Cups, Swords, and Pentacles, with the Court Cards titled King, Queen, Knight, and Page.

I like the concept of the Trump L’Oeil, or wild card (very like the Artist card in the “Sakki-Sakki Tarot”). The imagery is that of the dragon-like weathervane at the top of the Campanile. My very favorite card has to be the Devil, which is symbolized by a blood-red wyvern statue. The Fool is symbolized by a cherubic looking statue that stands in the crevice of a rocky outcropping. The Magician is a bronze bust of Sir Clough Williams-Ellis, the creator of Portmeirion. The Chariot is symbolized by an enormous clamshell carrying a majestic Triton. The Wheel of Fortune is symbolized by several bands on a perpendicular axis, intersecting to create an armillary sphere, crowned by a corkscrew drill bit. Death is an eagle clutching a snake in its talons.

While not conventional imagery, this is a stunning deck! I would love to one day be able to see this village (which is a tourist attraction, and looks to be a great place to spend some time and amaze ones brain!).

On the site that he created for this deck, Conley has placed an interactive three card reading, with the choice of using either Major Arcana only, or the full 79 card deck. What is interesting to me here is the text, which often refers to the direction that the figure on the card is facing – very much ala Robert M. Place’s work.

While not a learner’s deck, this certainly is a great deck for collectors, or for those that already have a solid Tarot base. This deck could easily be used for readings or meditation. It definitely opens up your mind!