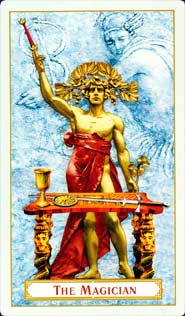 
Card Images from the Tarot of Prague 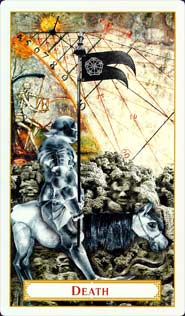 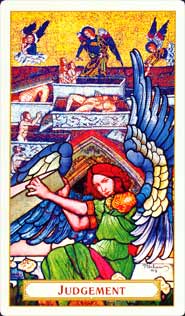 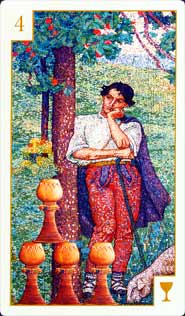 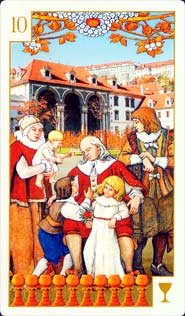 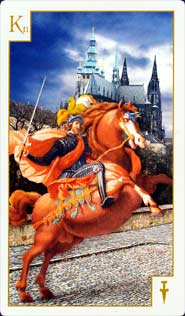 Tarot of Prague Review by Sandra A. Thomson

Hundreds - well, at least dozens - of new decks are created each year and occasionally one of those decks just takes your breath away. That is my experience with The Tarot of Prague.

Karen Mahony and Alex Ukolov are designers who run the baba studio in Prague. Karen told me once in conversation that Prague was a magic city (I later learned it was the surrealist Andre Bréton who so named it) steeped in art, esoterica, and the occult. Over the centuries it has been the home of practitioners of astrology, astronomy, and alchemy. The cards in The Tarot of Prague, a collage deck, reflect this ancient mysticism through the images of the city and the coloration of the cards. Karen and Alex meant them to reflect a sense of fairy tale illustrations and I suggest that is an additional way to use the deck beyond regular Tarot readings (more about that later).

The 78-plus-one-deck (two Death cards, one frightening, one less so) comes in a heavy folder bound together with golden ribbons rather than in a box. A little white book (LWB) is permanently attached to the back binder, so that if you choose to buy only the deck, it is complete in itself. Karen has authored a larger 301-page paperback to accompany the deck, and most readers will want to buy the set that includes it because for each card, there is:

The complete set comes in a pretty but rather unwieldy (14" x 7") container.

Everyone develops their favorite cards from a new or loved deck, and I am no exception. Most cards in the deck are vibrantly colored figures placed against some locale in Prague; however, because of his delicate coloring (truly reminiscent of a fairy tale illustration), I fell in love with the Knight of Wands, who rides a white horse high above the rooftops of Prague, even though Karen warned me that he was reckless, irresponsible, and sure to break my heart.

I also was taken by the Queen of Swords, partly because I identify with her, and partly because I have been trying for decades to get the Rider-Waite-Smith Queen to turn around in her throne. Finally, a Queen of Swords who faces me, as do a majority of the figures in this deck. She stands on a snowy hillside (oh, those frozen emotions unable to pierce the intellect!) and is taken from an illuminated medieval manuscript showing St. Catherine. The background shows the Strahov Monastery where the manuscript is housed. Unbeknownst to me when I was drawn to this card, the deck (and the city?) worked its captivating magic since when I was baptized, I was given St. Catherine as one of my patron saints.

One of the things I like to do with a new deck is to draw a Major Arcana card to ask the deck how it wants to speak to me. To answer this question I drew The Empress. The red-gowned Empress sits in front of a mosaic facade of the Municipal House in Prague. As in other decks, she represents the Earth Goddess or the Great Mother Goddess. So I take it to mean that the deck wants me to use it to get more in touch with my passionate and creative inner goddess (in spite of my long-time identification with the Queen of Swords).

I then asked the deck what it wanted to tell you who are reading this review, and the card I drew, from a full deck, is The Chariot. Here a woman, again wearing a crimson robe, drives a chariot, drawn by one black and one white eagle through the clouds above the city. She is taken from the decorated ceiling of the Theology Hall at the Strahov Library. Well, folks, be warned. It is clear to me that you-indeed, all of us-will be on a new and fanciful journey when you begin to work with this deck.

I mentioned earlier the fairy-tale quality of this deck. If you are at all prone to talk to the figures in your Tarot cards, the colors and figures in this deck are perfect to inspire and encourage you to develop a dream-like attitude and interact with the archetypes. I have a sense, difficult to articulate at this point, that the way in which Karen and Alex have combined the earlier artistic expressions of others with their own modern efforts touches, perhaps, a level of the collective unconscious not yet clear but waiting to be invited. Encourage their figures to "speak their piece" regarding how they do, or want to, interact in your life. There are layers and layers of this deck waiting to work their magic during your explorations. Once upon a time, there was a Queen of Swords. . . . .


Tarot of Prague Review by Solandia

Made entirely from thousands of original photos of the art and architecture of the "Magic City", Prague. A beautiful city known for its links to the bizarre and the occult, these 79 richly coloured collaged cards display Prague's streets and houses, murals and paintings, statues and manuscripts, and also have elements of the traditional graphics of Bohemian playing cards.

A great deal of thought is apparent in the Tarot of Prague, the first deck from Karen Mahony and Alex Ukolov at baba studio. It is a thoroughly researched, multi-layered tarot, with familiar Rider-Waite-Smith symbology transformed by the carefully selected images of the art, history and architecture of Prague. On its surface, it is a very readable tarot deck. If you look further, the life and history of Prague is revealed.

While these images are not instantly familiar - it's definitely not a Rider-Waite clone - each component of the card has been carefully chosen to convey an understandable tarot meaning, as well providing enough interesting detail to form a basis for exploration and storytelling. The overall art style of the cards is diverse and varies on each card from Art Deco to Medieval, scenic photographs from marble statues to mosaics. Not every card is aesthetically pretty, but the facial expressions have a lively humanity and all of the images have meaning. (That said, I did find the vibrant mosaics used in Judgement and the Four of Cups are particularly striking.)

The combination of chosen images conveys each tarot meaning with clarity. I like the treatment of the court cards, which I often find the most difficult to interpret. The Tarot of Prague's courts have helpful clues… a cherub hold two letters in the Page of Wands. The King of Pentacles is made of gold. The background to the Queen of Pentacles is a warm and homey looking courtyard. In the majors, the Empress card displays the three common meanings in one. The focus of the card is a mosaic of a regal woman. Below her, lies a mound of ripe fruit. Above her, there is a background image of a mother with children. Behind the Hierophant stands a library full of thick, hard backed books, suggesting the weight of established authority. The Chariot has a look of focused intensity, directed in her forward direction.

The creators have paid attention to the details and so the major arcana cards are titled, but un-numbered, to remove the conflict between the Strength and Justice cards. (So, if you prefer the historical arrangement with Strength as 11, or Waite's version with Strength at 8, you can reorder it to suit your preference.) There are also two Death cards provided with the deck; one an armoured death with staff and flag on the back of a horse, the other a skeletal robed Death, reclining with arrow below a chaotic background scene. It's a little more menacing than the traditional-looking card.

The cards of the Tarot of Prague are medium-sized, quite stiff, and only lightly laminated, which combines to make them easy to handle and shuffle. The back of the card has a reversible design with a palindromic protection charm in the outside borders.

This deck is also an independently published limited edition, with only 3500 sets printed for its first run. Imaginatively packaged, these cards have a fold over hardback cover tied with gold ribbon, fixed into the back of which is a mini-book of basic tarot info and short card meanings. (The inside cover of the cover is also stamped and signed by both Karen and Alex.) The full set in its cardboard box and printed sleeve is a little oversized, but it's a minor point.

The companion book, The Tarot of Prague by Karen Mahony, is a 300-page paperback filled with tidbits of Prague history. It starts off answering the question 'What is Tarot?' with a reasoned and fair explanation of Tarot and its history, Prague and Tarot, and some of Prague's more famous characters. The card meaning section has pictures of the card, a description, a short interpretation, and a full interpretation of a page and half. Space is also devoted to notes and sources on the the parts of Prague used in the cards.

The Tarot of Prague can be used as a straightforward tarot reading deck for all levels of ability, but the more knowledge of art or Prague, the more understanding you will gain from the deeper layers of the cards. Beautifully researched, designed and printed, the Tarot of Prague is one for everyone's collection.


Complete Details of Tarot of Prague


Similar Decks to Tarot of Prague