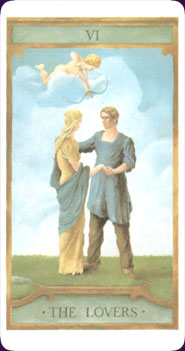 
Card Images from the Prediction Tarot 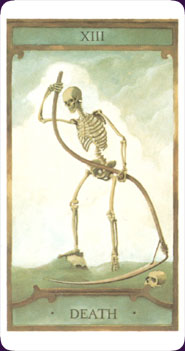 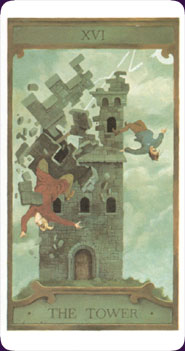 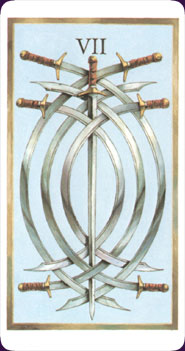 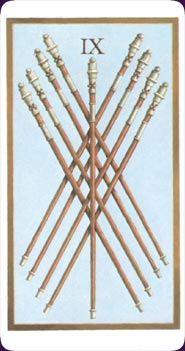 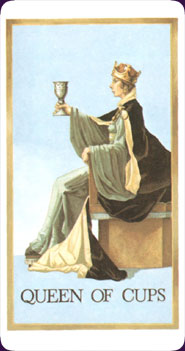 I recently received a Prediction Tarot deck in a trade. This deck is now out of print, and was originally printed in 1985. It was designed by Bernard Stringer and Illustrated by Peter Richardson, published by The Aquarian Press and printed in Belgium by Carta Mundi.

This is a semi-traditional tarot deck of 78 cards, with both Waite and Marseilles influences. The Majors are all in traditional line-up. The suits are Staves, Cups, Swords and Coins. The Courts are Page, Knight, Queen and King. The Minors are pips.

The sizes of the cards are a little smaller than the standard Waite deck. At 2 3/8 X 4 3/8, they come in at 5/16 less tall and wide than the Waite. This makes them ideal for those with smaller hands, but still a great size to appreciate the artwork. The cards are printed on quality card stock and are well laminated. The deck I came into possession of is 21 years old. The box and LWB look that old, but the cards have held their years very well.

The back of these cards show a small castle resembling a chess game’s rook piece, on a light blue background with a small white border. As such, cards showing in a reversed position would be obvious. Also- the castle on the back is out of scale, being only ˝ inch wide and 3/8 inch tall. The small size seems very odd and one wonders why they didn’t fit it more to the size of the card. This is a small thing in a deck with other interesting merits, however.

All of the cards, Majors and Minors, have a white background. As stated before, the Minors are pips. The Staves are displayed in a very simple straight style. The Cups are shown in a simple stacked manner. The Swords are done in an interesting fashion. Some are straight blades, while others are done in a curvy, saber like fashion. The curved and straight swords sometimes occur on the same card. It is interesting to note that the Courts in the Sword suit all possess the same curved saber style. The Coin suits are also stacked and are pretty unremarkable.

Several things stand out when comparing the Court cards. All of these characters stand (or sit) against the same, very simple background. This consists of blue flooring area and an even lighter blue, slightly gaseous (cloudy, if you will) setting. Additionally, Kings and Queens are all sitting on the same throne. The king’s thrones are colored differently. Going one step further, the Page, Knight and King cards of all suits all appear to be the same people. What I find interesting however, is that among all these commonalties, the artist decided to make the Queens different. They are all four definitively different women of different ages, faces and appearances. The women shown appear as a young blond queen in her late 20’s, a brunette in her 30’s, and two redheads. One seems to be in her 40’s and one in her early 50’s. It makes one wonder if these were modeled against particular women the artist knew.

I feel what sets this deck apart are the majors. While most still have some of that airy, gaseous background, a lot of detail went into these cards. They all have their names displayed under them and roman numerals above them. One small detail I like, however, is instead of using the traditional roman numerals (like IV for 4), the artist elected to use IIII for 4, VIIII for 9, etc…

Many cards stand out in the majors. Only a few are discussed here.

The Magician is a very interesting card. Not only does he have in front of him the traditional sword, cup, coin and stave, he has an ancient book with a lock and key, scrolls, maps on the wall and dice before him. A close review also shows he is using bones for divination on the table before him. He calls upon many different sources for his information. This is a very serious magician indeed!

One thing animal lovers will like is the Strength card. Here is shown a man dressed in a toga, Greco-Roman style, wrestling with a lion. He has actually laid down his club, opting instead to rely on his strength to best the lion. This is a nice departure from the traditional Marseilles character about to club the lion in the head. A good message that we have within us all the tools necessary to accomplish our goals.

There is humor in this deck too. The Hanged Man is not at all peaceful about his situation. There is terror in this man’s face. He is hung by one foot from a brace across two trees, hands bound behind his back. What seems to have him most in dismay, however, is the money he is losing. His coins are falling out of his pocket and he is watching in terror. This is an interesting divergence from the normal message of this card. Perhaps one interpretation of the card is when one is trussed up and hung upside down from a tree (or a different dire situation), money issues should become less important. A good reminder to us all that money cannot buy happiness.

The LWB is thorough in its message and attention to detail. At 39 pages, there are full interpretations of both normal and reversed aspects of the cards. The LWB also describes how different suits, as well as court cards, can represent certain types of people. There are two other interesting spreads shown in addition to the Celtic Cross. There is a horoscope spread with 13 cards. This spread is adaptable to cover a specific period of time. Following these directions, one can get readings for particular weeks or other time periods. The other spread shown is the Pyramid. This is a 10-card draw that is more suitable for considering a specific problem vs. a general reading.

One thing the LWB does is explain that no one card of itself is good or bad. Instead, one is encouraged to view it en-masse with other cards in the draw. It also explains that the reader has a duty to present the message in a manner that will not completely discourage the querient. Instead, presenting the material in a light that gives the option to “regard the obstacle as a challenge to be overcome and use his ingenuity to find a way round the problem”.

Overall, this is a good deck and is to be recommended! What I found the most appealing about this deck was the artwork and thought put into the majors. This is a really fantastic set of majors. They are beautiful and classic looking. The deck is of high quality and has a sense of humor as well as seriousness. Yes, the deck has a few things that could have been done better. Different backgrounds and settings for the court cards would be nice. The backs could have been arranged more to scale. This is not a deck for those who do not like to work with pip cards.

If these minor details are not a complete detractor for you and you can get your hands on one (long OOP), I recommend it!