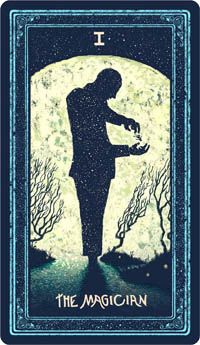 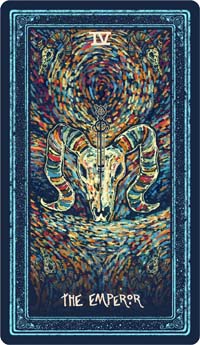 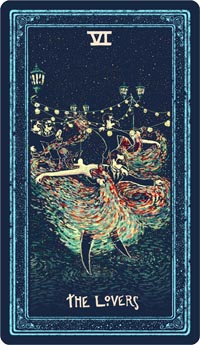 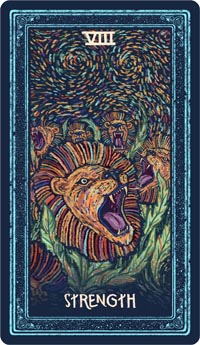 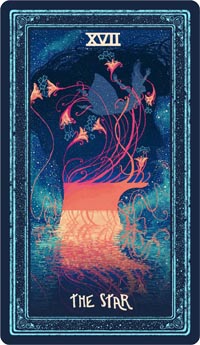 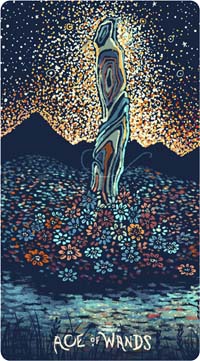 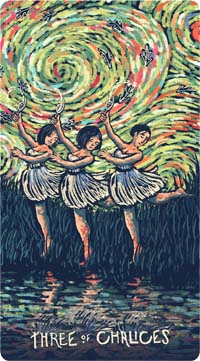 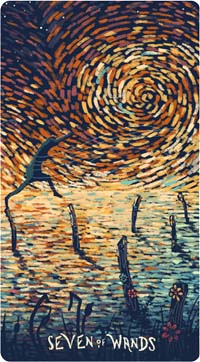 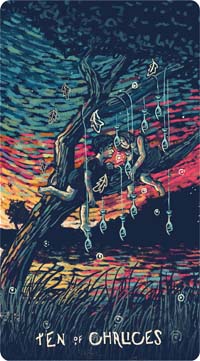 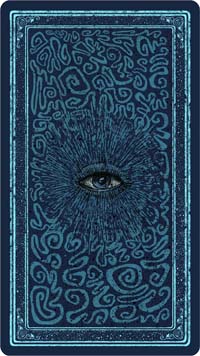 When I first came across the Prisma Visions, I was immediately drawn to the abstract impressionism. Even the photographs of the cards whispered things that at first were unintelligable but clarified as I dived into their psychedelic world that is serious as it's whimsical.

Many who are used to the Rider-Waite-Smith tradition and grew with it will find familiarity. If also looked at and analyzed with an open mind, this familiarity can also evolve into something quite different. Some cards will preserve their original meaning for you and some will base upon that original meaning and take you higher into another plane of understanding that is so crystal clear that you will be surprised by it's accuracy and depth of vision (hence the name Prisma Visions) into the subconscious.

I've been using these cards for a little over a month and one thing I've observed is that these cards tend to look at a lot of the psychological aspects in any given situation. The material or mundane things need more digging and connecting. This deck will pierce through any lies, half truths, insincerities for short, illusions. That eye on the backs of the cards, box and booklet? That eye will unadulteratedly see "you".

The quality of the cards and box are top notch. I was expecting a very glossy finish but the cards are semi-glossed so that compliments their colors very nicely. The edges are silver gilded which normally I thought I wouldn't like but when I actually got the deck I felt that without the gilded edges, these would've had something missing. The Minor Arcana can be lined up into one continous panoramic image which is pure genius on Mr. Eads' part.

All in all this is a beautifully designed deck that has everything you need inside of it. Artistic magic, love, seriousness, playfullness and mor important than all: Transcedental Enlightment. This is my go to deck and I'm sure it will stay that way for a long, long time.

I'm really enjoying this decadent deck! I love the mood - dreamlike and sensuous - the impressionistic flow and feeling of movement, rich colors, many of which are dark but also many that are vibrant, and the combination of intense, evocative images combined with delicate details.

His artwork and the deck altogether is sophisticated yet also has a touch of whimsy that makes it feel more accessible, for lack of a better word, than perhaps other art decks do. That combination really works for me, making me want to play with it and not just admire it from afar. It's also worth adding that I really love that all the cards but the major arcana are borderless, and even more so, that it has silver edges! It's my first gilded deck and I'm enjoying that it's silver rather than the more common gold, I guess just because it's a bit different. The coolness of the silver goes with he coolness of the blue card backs...and there is also much blue - a sort of midnight blue - in the images. So the silver gilding for me is really the icing on the cake (bling!) and really completes the whole package (as does the lovely, lovely, truly functional box which is thick, sturdy and basically hinged)!

I haven't read much of the LBB yet (little BLUE book) - which sits nicely inside the box - only because I'm going slowly with the cards over time, shuffling hand over hand a lot, spreading out and breaking them in for traditional shuffling which I like to do no matter how fancy the deck. These are thick, glossy, beautiful cardstock... I don't have much time to work/play with my tarot cards so it's a bit sporadic. I've just been concentrating on the images and doing small, one to three-card readings for now. I can say that it's probably not the best beginner's deck only because I have to really analyze each card closely and compare it to the more recognizable images of more common decks (not being that proficient yet) but I'm rewarded with every effort.

As many of you probably have heard/seen by now, the deck's four suits - when laid out in sequence - form a long panoramic picture. It's very fun to put them together like a puzzle and see the "bigger picture" that way.

This deck was another one that just grabbed my attention immediately. It is beautiful. If you lay all the minor arcana out in order, each suit flows together into one long beautiful narrative. This is actually the first deck that I've owned where the Minor Arcana captivate me more than the majors!

In the wands suit, you watch a meandering stream flow through the cards taking the reader on a journey. It begins with an explosion of stars in a supernova around a standing wand. It then moves through a dark night lit only by the stars. This scene bleeds into a fiery sunrise that in turn leads into a forest and culminates in a fearsome explosion of energy that envelops the figures in the court cards.

At first the energy of the wands seems to completely overwhelm the page, lifting them off their feet and high into the air as they reach through the energy. The knight can be seen directing the energy with their hands, but still caught up by it. The Queen figure draws the energy around her body and coaxes a flower to bloom. A vibrant shock of hair moves around her with the energy mixed in. Finally the king floats mid air, controlling the wands energy, relaxed and in control despite the whirling maelstrom of fire all around him. The wand energy has coalesced into a crown over his head. I love the story that those court cards tell, a progression over time from being the overwhelmed page to the mastery of the king. I find it echoed in the other courts as well. I especially liked the Cups court where they all interact with the same water as it flows from the King down to the Page.

The major arcana are set apart from the minors with a decorative borders around them.

As you can see from the cards shown, the art style of the deck is very Impressionistic, it brings to mind Van Gogh’s Starry Night in a lot of places. Each suit represents a season as well. The Swords suit is Winter, Wands are Spring, Pentacles are Summer, and Cups are Fall.

The artwork is beautiful, but so are the cards. They're a little bit thicker than most tarot cards, if you've ever used the Wild Unknown deck, they're similar in weight. They have silver on their edges which is such a treat, it's super reflective and shiny. I find them a little bit challenging to shuffle just because of their thickness and stiffness. A wash is easier than the shuffling in my hands. Although I'm sure the more I work with the cards the more flexible they'll become.

Readings with this deck are just as wonderful as the cards themselves. There is so much to see in these cards, so many symbols and so much depth. I can absolutely recommend this deck, I'm looking forward to a lot of lovely readings with these cards.