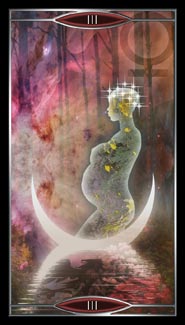 The Quantum Tarot combines modern theories of physics and quantum mechanics with tarot, through vivid space images from NASA and the Hubble telescope. It's now out in a reworked second edition from Lo Scarabeo, with two extra cards, some changed images, and new black borders. 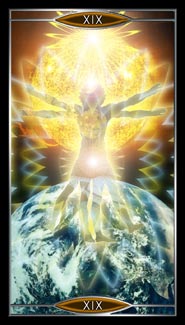 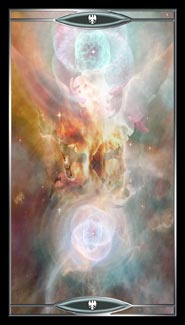 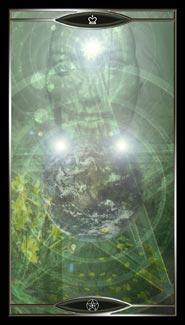 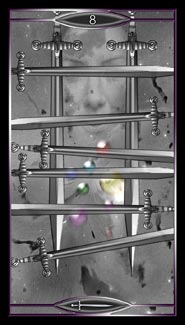 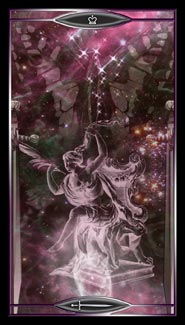 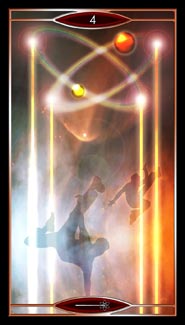 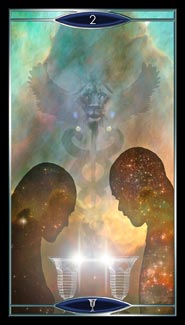 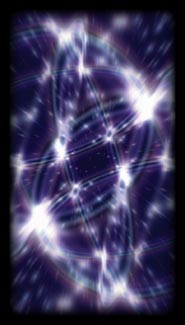 As a very keen owner of the original version of the Quantum Tarot which I have also reviewed, I was disappointed when I heard it was to go out of print, and later on delighted when I heard that a major Tarot publisher, Lo Scarabeo, was to pick it up. It has been on the market a short while now, and I finally have a copy in my possession.

I must admit that the first thing I did, before even opening the package that it arrived in, was to shake the package. The sensations and sounds gave me to believe – rightly – that the deck was packaged in something quite unlike the flimsy boxes that most Lo Scarabeo decks come in and something more like the original Kunati box, and that the cards themselves may not have been shrink- wrapped inside that box. Many of my reviews rave – positively or negatively – about packaging and over-packaging, so I was delighted when I opened the parcel and saw that my guess was correct.

The new edition, like the original edition, is packed in a sturdy, two- piece, very solid box with artwork from the deck wrapped around it. This comes shrink-wrapped: the deck within it doesn't. The box is slightly smaller: the same height and width and less than a centimetre shorter and thinner. Until I held the two boxes at the same time, they felt very alike in size. Whereas the Original Edition features on the box images drawn from the Two Pentacles, the Fool, the Four Wands and the Moon, the artwork on the new box features artwork from the Moon, the Magician, Justice and the Seven Pentacles, giving it a cooler external colour-palette overall.

In the reprinting, the deck has lost the silver-gilt edges of the original edition, which was a luxurious touch that was quite outstanding and for some reason more appealing than the gold edging on some of my other decks, and the cards have become slightly narrower, but that is to be understood when you consider the new publisher's requirements. This is traded off against the use in the new edition of a feature not found in the old edition: of spot- varnishing. Simply-put, a high-shine clear varnish has been used carefully over selected parts of the image to produce a reflectivity over some features but not others. This has a certain charm – it will be interesting in months and years to come to see how well this stands up to repeated handling.

Lo Scarabeo has given the formerly borderless cards a thin, black border, but I can live with that easily. They have not given it the traditional multi- lingual titles of other Lo Scarabeo decks, and I am thankful for that. In fact, they probably have swung too far the other way, removing titles altogether. The Majors have a Roman Numeral top and bottom. The Pips have a conventional number and a suit-symbol, and the Courts have a suit-symbol and a chess-piece symbol (pawns for Pages).

As in the original deck, the LWB is not a LWB but a mini-companion-volume, but again, in the interests of mass marketing, here there have been losses. Lo Scarabeo kept their multi-lingual thing going whilst the original companion-book was in English only, and instead of the original 199 pages of information-dense text, there are only 128 pages – which have been divided between four languages! As such, the mythological and scientific explanations of the each of the cards have been greatly shortened, and the thought- provoking divinatory/oracular questions Kay supplied for each card are entirely missing, sadly. Gone, too, are the philosophical thoughts about Tarot generally at the beginning of the book, and the Quantum-specific spreads Kay designed – I particularly liked the Uncertainty Principle Spread, and there will now be a whole new generation of users who will never be aware of its genius.

So yes, in the process of preparing the deck for the mass-market, the process of shortening the book enormously and removing the silver-gilt has caused the deck to lose something for me, and it in no way replaces the old deck. In the other hand, while many of the best cards out of the original version have been left entirely unchanged except for subtle touches of spot-varnishing here and there, other cards, such as the High Priestess and Justice have been reworked slightly. I assume Chris Butler will be happy to have had a chance to revisit some of his artwork and I am pleased with the changes, but I really don't see them as an improvement on the original images, more as a re-interpretation of them. I loved the sense that the old deck had, of being highly populated by subtle human faces overlaid behind other images to produce a ghostly effect – that has largely gone, along with Kay Stopforth as the Queen of Wands. However, in its place are forceful, strong, workable cards with a great deal of aesthetic appeal.

Another gain is this: the deck now has a 24-card Major Arcana, adding a Universe card (along with the World instead of replacing it) and a Phoenix card, as the idea of the developed but still innocent soul of the Fool. These two cards are really quite fascinating, and I am enjoying getting to know them.

The science in the second edition still works, but I miss the fullness of the discussions in the older, bigger booklet. The cards in both editions work brilliantly for me, both as a Tarot Reader and as an aesthete. Anyone who has loved the first Kunati Edition will consider the second Lo Scarabeo edition a worthy companion-piece to it: one does not replace the other. Instead they sit proudly side by side, both slightly different, both loveable, both excellent pieces of work. If the second version is your first Quantum deck and you enjoy it, keep an eye open for any second hand copies of the first that could come your way – you won't regret it. And owners of the older edition who might be um-ing and ah-ing about grabbing the newer version, well it's worth owning both.

If I could, I would shake the creative team by the hand. Great work again, people!