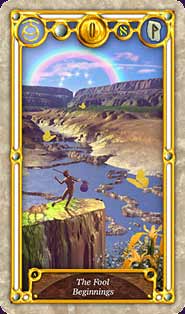 Created in 3D modelling software, thee Quest Tarot cards are luminous, dreamlike and vivid. The 79 card deck has also been designed to be similar to a ouija board for divinatory use.


Card Images from the Quest Tarot 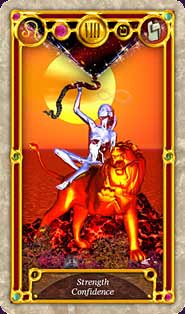 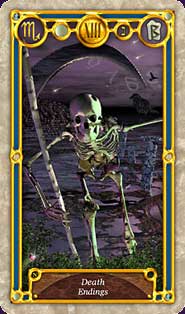 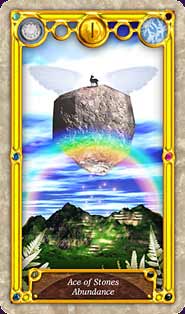 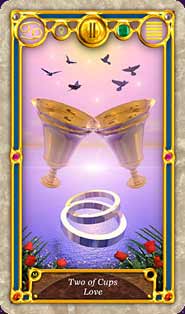 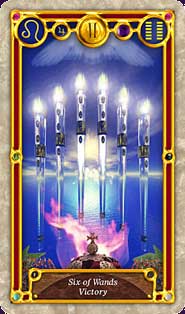 The "Quest Tarot" is an absolutely stunning deck - an opinion shared by others as indicated by some very special words in the front of this book. From the frontpiece:

"Once upon a time, in a land far away, a gentle sleeper dreamed visions for you of raw power and universal potentials. Use this deck to see into alternate realities, access forces prior to manifestation, and create change before it appears in the tangible. This is a deck for explorers of magickal planes and realms."

Mary K. Greer - author of "Tarot For Yourself" and Tarot Reversals

"Joseph Martin's "Quest Tarot" images are vivid and exciting, a wonderful new addition to Tarot possibilities. With inspiration from ancient and modern Tarot spiritual traditions, they invite us to journey with them into exciting new territories."

Rachel Pollack - author of "78 Degrees Of Wisdom", "The Forest Of Souls" and creator of "The Shining Tribe Tarot"

All this before I really even opened the book (The Compass Guide To The Quest Tarot) that accompanies the deck! This deck began with a challenge - to create just one card within one week. The challenge was well met. The author is a very humble person, ready to credit everyone along his path that mentored him, encouraged him and supported him. The result is a wonderful Tarot deck that is a most supportive tool in anyone's life.

The intent of this deck is to present the student with a tool that will encourage their personal growth while at the same time carrying the quality of fun. Truly, when we can connect with the child within, when we can learn to laugh at the most "serious" aspects of our lives, we are well on the Fool's Journey.

In the very beginning of the book, Martin sets the tone for all that is to follow. He gives the student a list of what what is "necessary" for working with the Tarot: the deck, a square of silk to wrap it in, a wooden or granite box to keep the wrapped deck in, a Tarot cloth, a wooden or granite topped table to read on and a sheet to record your Quest Tarot readings on. Many will not consider all of this necessary, and certainly how each student deals with these aspects of tarot is up to them, but it shows the level of respect and humbleness that lives in the author. He offers us the highest - we will take what we will, and leave the rest behind.

Joseph Martin takes the esoteric world that is traditionally considered part of Tarot and presents it to us with great depth. One of the first things that we see is a chart of the astrological attributes for each of the cards. Not just the name of the planet, but an short explanation of how the energy of the planet presents itself in each card.

Martin has chosen to use the traditional seasonal nature of the Aces as a device for determining timelines. On each Ace there is a clock, indicating the proper months. For example, a clock reading 12, 1 and 2 indicates the months of December, January and February. Martin also gives an alternative method for determining timing by using the cards and numerology in a Celtic Cross spread.

Gemstones are another esoteric system that is included in this deck. Martin includes charts for gemstone associations for the months of the year, for the astrological signs, for planets and stars and for ayurvedic and mythological birthstones. He also includes a description of each stone.

Quite an interesting inclusion are the Hebrew letters. Hebrew letters are included on the cards, and there are short descriptions of the energy of the letters so that they can be read in conjunction with the cards.

The same presentation has been made for the I Ching and the Runes - esoteric oracles that contain their own forms of wisdom.

The Court Cards in this deck have many ways of expressing them. To show the arising feminine aspect of our current times, the Court Cards have been rearranged so that the feminine is the primary aspect - instead of King, Queen, Knight, Page we now have Mother (Queen), Father (King), Daughter (Page) and Son (Knight). Martin sees the Court Cards primarily as people within the Seekers life. The Court Cards are coded across the top for skin color (the small outside circles), eye color (the large circles in the upper corners) and hair color (the two smaller inside circles).

Several different types of games that can be played with the Tarot are included in this book. These can be done at a party, as part of a class or seminar, with friends - wherever the Tarot can be best used. "The Story Circle" is literally a game in which cards are drawn at random, and a story is told. "Who Am I" has people drawing cards and having the rest of the group guess what card t hey are holding by the clues that they give. There is even a Quest version of poker and an interesting spelling game. All of these are wonderful ways to become familiar with the Tarot - a true gift from the author.

There is also an inclusion here of a "Blank" card. Martin encourages us to make this Blank card a tool that encompasses who we are as individuals. In essence, this card becomes "us" in any reading. It can be used as a significator or as an added card for personal readings. Additionally, the Blank Card may also be used to create an energy that the student feel that they want to add to the deck, much as the "Master" card in the Osho Zen deck.

The descriptions of the cards and their energies are presented in a very coherent manner. One page is given to a black and white scan of the card, along with a description of all of the symbols included on the card. General information is then given, along with upright and reversed meanings for the cards.

I feel so out of breath - there is depth, breadth and more to this deck. It will take the Seeker as far as they want to go, as fast as they want to go. While the cards are a bit "busy", I recommend this system to all students/Seekers, at all levels.

Professional artist and tarot reader, Joseph Ernest Martin, has created a uniquely modern tarot set, designed to give direct answers to yes/no questions and spell out words, and still be suitable for more traditional tarot readings.

The art of the Quest Tarot, created by 3D modelling software, blends Rider-Waite-Smith, Thoth and the author's personal symbolism into a shimmering, dream-like, magical Tarot universe. Despite being fully computer-generated, there's little of the sterility found in some other computer-based decks, such as the One World Tarot.

All of the people in the cards are coloured in solid metallic or transparent hues and tones. The sex of the person is clear but their skin colour is not, as the author intended for this to be 'universal' tarot without these boundaries. With this in mind, the Lovers card has also been updated to encompass three sexual orientations, and the gender of the people on the card has been left deliberately ambiguous.

Suits are Cups, Wands, Swords and Stones (instead of Pentacles or Coins). The court cards don't exactly match the King/Queen/Knight/Page archetypes that are most familiar to us. Instead, they are named and based on Son, Daughter, Father, Mother archetypes. (The feminine cards also have the higher position in the card order for the first time.) The minor cards have similarities to the Thoth minor arcana, being decorated pips rather than full tarot scenes with people, a la Colman Smith.

Included in the Quest Tarot are two extra cards. The blank card is intended to represent the unknowable, but is also provided so you, the reader, can create a personal card for your deck. The second new card, titled the Multiverse, is a visual depiction of Martin's belief that there are multiple parallel universes and that we can switch between them at will.

All 80 cards have an elaborate border framing the central tarot scene, which holds the symbols and clues for using the cards to gain answers to direct divinatory questions. Outlined in gold, these borders show:

Using all of these associations is explained in the companion book, The Compass: Guide to the Quest Tarot. Joseph Martin's intent is to get the reader 'up and running' with this set as fast as possible, without overwhelming them with an entire history of the Qabalah, Astrology or I Ching. Martin does cover these and other basic tarot topics in the book, but briefly and with just enough detail.

In addition to the introductory info and the card pictures and meanings, The Compass has sections on using the cards for yes/no questions, a system for foretelling timelines, how to read physical characteristics and spelling out words with the cards, and even a few tarot party games. (Instructions for playing Tarot Poker seem a little unexpected in such a spiritual tarot book, but games are one of the oldest uses for tarot cards.) A three-card, ten-card and the eleven-card Quest Tarot spread are also included.

The Quest Tarot is a self-contained tarot set that succeeds admirably in its goal to get newcomers started with tarot as quickly as possible. Its novel approach to fortune telling and tarot imagery should hold interest the more experienced reader as well.