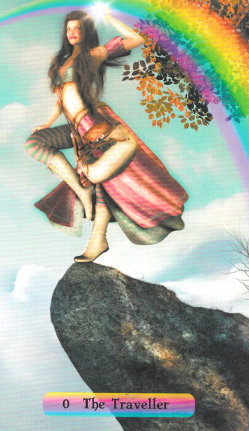 The Rainbow Travellers Tarot portrays a attractive world of gentle fantasy and mystical imagery. The 78 borderless cards are based on the foundation of the Rider-Waite Tarot, and the Myers-Briggs personality profiles. 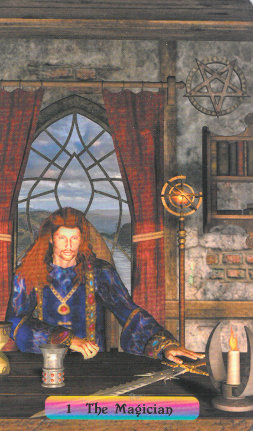 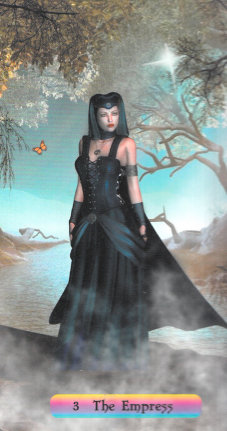 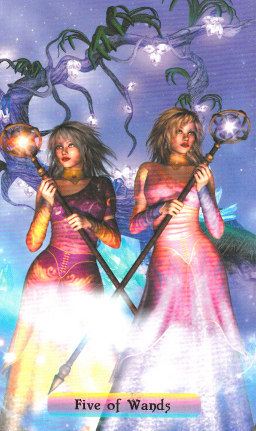 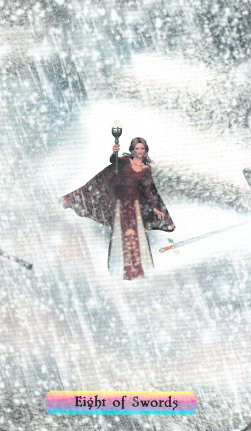 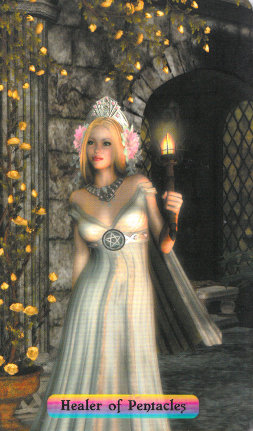 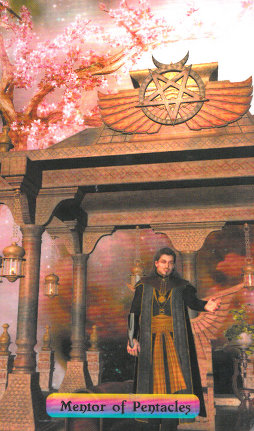 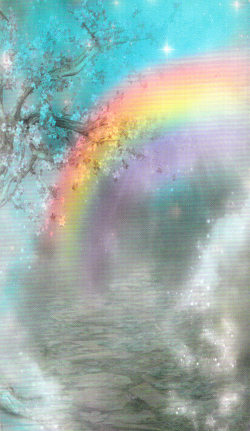 “The Rainbow Travellers Tarot” is a stunning deck – gentle, with modern imagery, and a “WOW!” quality to each of the cards. The inspiration for this deck came from Waterman’s earlier work with mythical and fantasy images. This is a deck where you truly want to enter the world that the cards portray – and it is very easy, as there are no borders! Yes! It is noted in the introduction that both the artwork and the divinatory meanings may stray from the traditional, as they come from the author/artist’s own study.

She also notes that each of the 78 cards has its own story to tell … and indeed it does! Definitely a deck for ceremonial and ritual work, as well as divinatory readings. Rainbows have been heralded as messengers of beauty and hope after a storm – in this deck, they help us through the storms in our lives (the last is my interpretation).

The Minor Arcana provide the messages that support the querent on their journey – Soul/Wands, Heart/Cups, Mind/Swords, and Body/Pentacles. In this way, we create the balance in our lives that allows for growth. While the suit symbol appears in each of the Minor Arcana cards, it does not appear multiple times, as in traditional decks.

The Court Cards have become the Guide Cards in this deck. They are here to teach us.

I am going to take a moment to talk about Waterman’s background – she is a certified Myers-Briggs training consultant, with a passion for helping others to understand themselves, and to develop their greatest potential. Her inner self is an instant fit with the Tarot, making the creation of this deck almost a forgone conclusion! And yes, the foundation of the deck is the Myers-Briggs personality profile, developed by the mother/daughter team of Katharine Cook Briggs and Isabel Briggs Myers, based on Carl Jung’s earlier work in his 1921 book “Psychological Types”.

“Knowing yourself is the first step towards making your dreams come true.” - from the Guidebook

The cards come with a 40 page guidebook, a certificate of authenticity, and a beautiful Tarot bag to act as a home for the cards. The cards are 3” by 5”, on good quality card stock. The backs are beautifully done, showing a blue sky with stars, a multi-colored rainbow on the upper 2/3 of the card, and a gentle green branch coming in from the left hand side of the card, and meeting the rainbow. The whole image is seen slightly out of focus, as through a mist. The backs are not reversible.

The card faces show the imagery out to the sides of the card (there are no borders), with the card name across the bottom. (Roman numerals are used with the Major Arcana, the Minor Arcana is written out in text. The art is digital, a nice mixture of reality (the human figures) and fantasy (the background).

The guidebook includes background on the deck, and on the author/artist. Each card is presented with a black and white image, the basic energy of the card, the messages associated with it, and questions to ask yourself when the card appears in a reading.

From the book, for the Mentor of Wands:

The Mentor of Wands is passionate about their beliefs and lead with a sense of ease. They are highly respected and people flock to them for advice and counsel. They are patient and comfortable giving orders and delegating responsibility. The Mentor of Wands places high importance on traditions. Family, faith and community are sacred to them.

Messages associated with the Mentor of Wands:


When the Mentor of Wands appears you should ask yourself, “Am I participating and doing my part?” “How can I strengthen my spirit?”

Waterman is bringing out an e-book entitled “Intuitive Reading”, available through her site, which will address selecting a Tarot deck, how to care for your cards, setting the stage for a reading, studying individual cards, guided interpretations, questions to ask yourself, and how to do readings for yourself and others. An online e-course is also in process!

I highly recommend this deck for divinatory readings, daily guidance, ceremonial, and ritual work. The artwork is incredible, the cards very easy to enter, and the wisdom just flows!