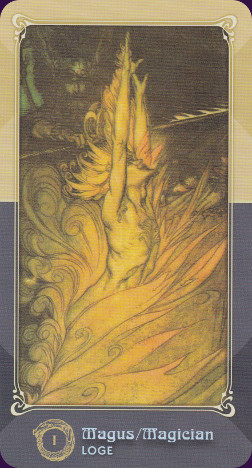 The Ring Cycle Tarot is a complex, non-traditional tarot based on The Ring of the Nibelung, an opera by Wagner. The 78 cards are adapted from illustrations by Arthur Rackham and are part of a deep system based on the mythology, symbolism, plot, music and characters of the Ring Cycle. 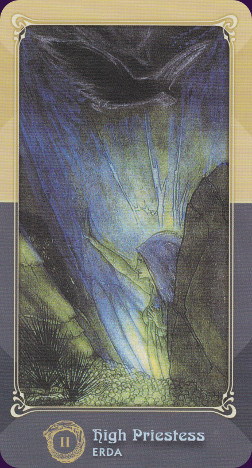 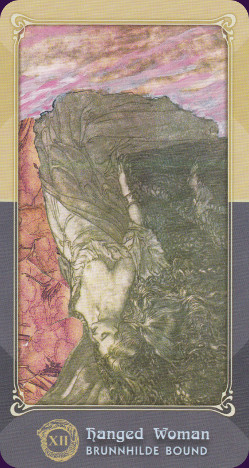 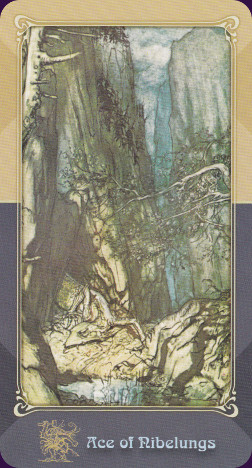 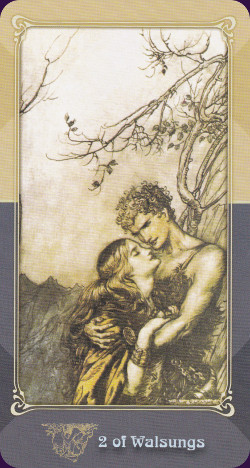 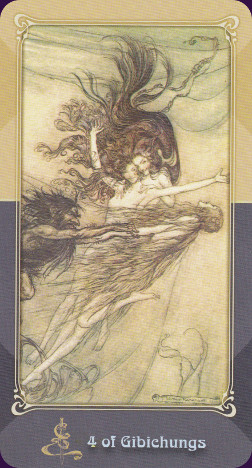 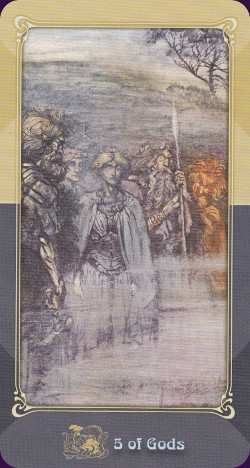 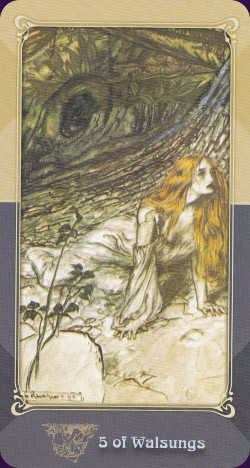 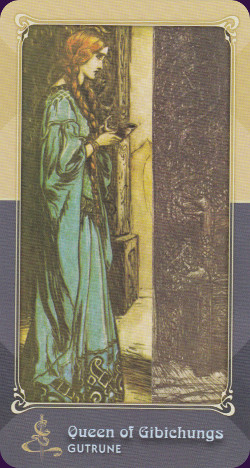 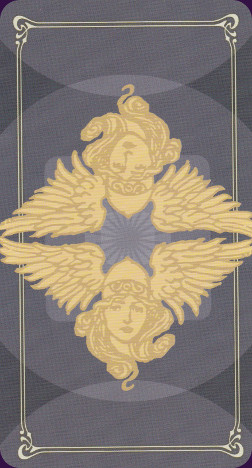 The Ring Cycle Tarot is an extraordinary deck created by Allegra Printz and published by Schiffer. It is based on Richard Wagner’s epic opera The Ring of the Nibelung, which tells the story of a cursed ring that wreaks havoc and destruction on the lives of all who possess it, and ultimately brings about the downfall of the gods. If this sounds a little familiar, yes Lord of the Rings, it is because both Wagner and Tolkien used the same source material for their inspiration – Scandinavian myths, particularly the Edda, the Icelandic Edda, and a mediaeval Teutonic epic poem - Nibelungenleid.

Richard Wagner (1813 – 1883) composed his epic 15 hour opera over a period of some 26 years (1848 – 1874) and unusually wrote both the libretto and music. The Ring of Nibelung is comprised of 4 operas that combine to tell the overarching tale of The Ring – Das Rheingold, Die Walkure, Siegfried, and Gotterdammerung.

This is a 78 card deck, with 22 Major Arcana and 56 Minor Arcana cards. The Major Arcana follows A. E. Waite’s standard ordering of the cards, no cards have been renamed with the sole exception of Judgement, having Crowley's title "Aeon". However all the cards have alternate or sub titles – these are both dramatis personae and events from The Ring. Here you will meet characters you may be familiar if you have some knowledge of Norse mythology; Wotan/Odin, Loge/Loki, Freia/Freya, Fricka/Frigg among others such as The Norns, dwarves, Valkyries, Giants, and mortals. The Major Arcana tends to concentrate on the most dramatic moments from The Ring.

The Court Cards are King, Queen, Knight, and Page though they all have alternate titles such as Enslaving Alberich, Young Siegfried, Spying Loge, Siegfried At The Hunt, Innocent Siegfried – the same characters in different guises or stages of development.The Court Cards in the RCT can represent actual people, but they are also seen as the embodiment of a message, and sometimes a more abstract event.

The Aces are seen as separate and more potent than other number cards and have been designated as "Landscape Aces". The Ace of Gods is titled 'Heights of Valhalla’; the Ace of Walsungs is ' A Forest Glade’; the Ace of Gibichungs is 'Winter Snowstorm’; and the Ace of Nibelungs is ‘Earth Chasm’. These cards are seen as embodying the full power and potential of their respective suits.

The remaining number cards (2–10) have no subtitles on the cards themselves, however the guidebook does give them titles – these are both descriptors of the scene depicted on the card, and a guide to the card’s divinatory meaning.

The cards measure 77 x 140 mm which makes this deck considerably longer than many standard tarot decks. The card stock is good, quite dense and a little flexible – the cards, when stacked up, measure over 33 mm depth which makes them quite a handful. The finish on the cards is smooth and low sheen, this facilitates easy shuffling; the cards are not slippery, nor do they clump together.

The print quality on the cards is excellent; the subtleties and vibrancy of the artist's unique vision has been preserved without compromise. Some may appear to be a little blurry but this is actually part and parcel of the artist’s technique, rather than a printing error.

The artwork has been culled from Arthur Rackham's illustrations of The Ring. Arthur Rackham (1867 – 1939) is considered to be one of the greatest artists of the Golden era of British book illustration (1890–1918). He worked primarily in watercolour, pen and ink. He used both colour and monochrome in his illustrations and both styles are represented in the Ring Cycle Tarot.

As befitting the often dark and gloomy Northern European setting of The Ring the overall palette is quite grave. The colours tend to be quite wintry, with flashes and highlights of luminous, glowing colours – greens, reds, and yellows. Rackham's monochrome illustrations are composed in shades of sepia. His distinctive style is quite magical and certainly gives the viewer the impression of otherworldliness. He specialised in illustrating children's tales such as Alice in Wonderland, Peter Pan, Cinderella, Sleeping Beauty, Goblin Market and many other fairytales and stories.

Each image is contained within a narrow art nouveau frame, and this in turn has a border – fawn on the top half, slate at the bottom half of the card. The cards official title is given in art nouveau type and the subtitle is in smaller, plain print. The card numbers are given to the left of the titles, encircled by an Ouroboros. The print on the back of the cards, mirror images of a Valkyrie, on a plain slate-coloured background is fully reversible.

The cards are part of a box-set which is unusually large. As always with Schiffer’s tarot decks, the presentation is outstanding. The box-set measures 154 x 298 x 47 mm. It is solid cardboard, with a glossy printed cover featuring images from the RCT and some basic information about the deck. The art nouveau presentation and fawn-and-slate colour scheme, a carryover from the deck itself, gives this box-set real elegance. The lid is fold-back, with a small ribbon loop for lifting the top, and ribbon hinges to hold it in place. The cards sit in a deep well to one side of the box, the guidebook rests beside it.

The guidebook is a substantial 254 pages written by the deck's creator, Allegra Printz, and is packed with information.

The Preface and Introduction outlines the development of the deck as well as some information about Wagner, and Arthur Rackham. From here the book is divided into 3 sections. Part 1 deals with the 'Epic Background’of The Ring story. The author explains her choices, then goes forth with a unique 'Strategy for Understanding this Deck In Relation to Wagner's Ring Libretto'. Here the tarot user draws the listed cards from the deck and works their way through the complex tale of The Ring. This enables the tarot reader to place the cards and divinatory meaning within the context of the story, giving additional layers of complexity to any reading. This is no small undertaking – each act of the Opera has its own in–depth chapter and cards (approximately 18 per act), which all adds up to 43 pages of preliminary work to familiarise oneself with the deck. By the end, mind you, you will be a fully fledged "Wagnerite”, able to hold your own with the most rabid Ring Cycle aficionado.

Part 2 deals with the divinatory meanings of the cards. Each card has a small black-and-white reproduction of its illustration. There is a brief background, which describes the scene taking place in the image, this is followed by upright and reversed divinatory meanings. While these divinatory meanings don't stray far from accepted, standard meanings, they are thorough, direct, and extremely helpful.

Part 3 of the guidebook is the Appendices. There is a 22 page quick reference guide to the card meanings. Additionally there is a brief biography of Arthur Rackham; a fascinating guide to the driving themes of The Ring, and Wagner's Ring music. In concert with this is a list of suggested listening, after all, not many tarot decks have a soundtrack of such impeccable pedigree. Finally there is a substantial Bibliography for those wanting further information about Tarot, Rackham, Wagner, and Esoterics.

This astounding tarot deck moves far beyond a labour of love – it is both original and visionary. It has been created with an eye for detail, and a thoroughness not often found in the world of tarot publishing. It is complex and challenging and therefore not recommended for beginners.

However if you are a tarot buff, or love Wagner then you must get this deck. If you are a fan of Arthur Rackham's fabulous illustrations, and particularly those he painted for The Ring, then this deck is for you. And if you want a tarot deck that is intriguing and thoroughly engaging then the Ring Cycle Tarot is just perfect.