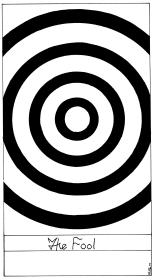 The Rotin Tarot is an enigmatic, abstract black and white deck. It has 22 minimalistic cards that work with the polarities and dark and light. Now the eighth deck to be published in a limited edition by Adam McLean.


Card Images from the Rotin Tarot 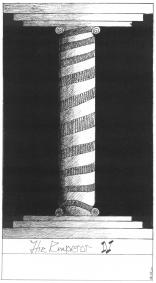 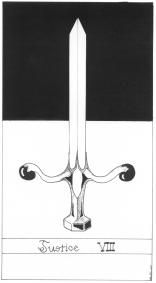 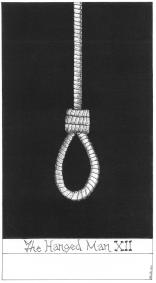 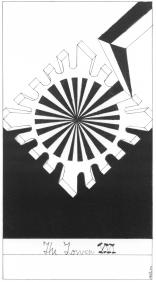 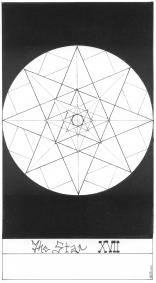 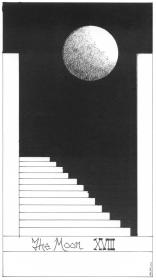 The Rotin Tarot, designed by artist Peter Rotin, is the eighth tarot in a series of limited edition Art Tarots published by Adam McLean. This black and white deck consists of 22 Majors, a title card, and an edition card numbered and signed by the artist. The cards arrive in a beautifully constructed lidded box with a black ribbon attached inside to gently remove the cards from the box bottom.

The Adam McLean publication exceeds all expectations for professionalism and quality. The card stock with the matte-finish lamination feels a touch heavier then the mass-produced commercial tarots and gives a rather sumptuous, tactile experience when handling the deck. The attention to detail is evident with the rounded corners and sharp, clear images. Overall, the production value itself clearly qualifies the deck as a step beyond mass-produced commercial methods and into the realm of art.

The card dimensions are 4.25" x 2.4" (10.8 cm x 6.1 cm) printed on white stock. This card size is a little smaller than the standard tarot sizes and would be easy for small hands to shuffle.

The Rotin Tarot contains black and white line drawings in ink, pencil and pen surrounded by a thin black border line. A double box at the bottom of each card contains the card name hand-printed in a calligraphic Gothic style followed with the appropriate Trumps number. The cards follow the generally accepted Marseilles numbering system (Justice 8 and Strength 11) with no number (0) printed on “The Fool” card. The card backs are an evenly split black and white diagonal that would indicate a reversed card.

No card meanings or other textual information is provided; however, at the Rotin Tarot website, the artist has included a variety of quotes from philosophers, poets, psychologists and other writers for several cards that provides insight into the illustrative choices for that particular image.

The images are a fascinating mix of optical and representational styles unified by a delicate balance between light and dark. The strong geometric forms contrasted with freely drawn objects resonate with visual textures. A sense of movement is created by the optical illusions presented either as full card illustrations or in combinations with selected representational objects. As many objects are rendered with pencil the soft grey tones provide visual relief against the stark black and white constructions. Interesting patterns begin to emerge playing on the positive and negative spaces, especially evident when the cards are examined in large spreads.

Although at first glance many of the cards appear abstract and difficult to interpret, the minimalist approach provides a clear visual reading to standard tarot interpretations.

The Fool is an example of a predominately optical, geometric style. The outer concentric circles break the edges of the card creating a disruption to the evenly spaced inner circles. If the Fool is understood to be a new beginning or a journey, this card illustrates escaping the confines of structure with freedom to move beyond the repetitive and familiar.

Justice combines representation with geometric forms consisting of a freely-drawn short sword or dagger set against a horizontally split background of black and white. The fluid organic drawing alludes to the human aspects of justice, but the strong division of black and white is a reminder of the absolute logic required to maintain balance.

The Hanged Man is a simple drawing of a rope tied into a noose set against a black background. The human form has been replaced with the suspended rope, and the noose remains empty. The noose terminates before reaching the edge of the card, but the untied rope reaches toward and beyond the boundaries into the realm of metaphysical mystery.

The minimalistic imagery opens this deck to beginners with a basic knowledge of Tarot card meanings, and provides the more experienced reader great latitude with interpretations. The Rotin Tarot is a fascinating interpretation of Tarot that creates a dynamic reading experience with a mix of optical illusions and representational imagery. The box design includes a little “Tarot Secret” to be discovered by the patient observer.